Two years into the life of the Switch and there’s still a wishlist of beloved Nintendo franchises fans are dying to see confirmed for the system. Given its huge success on both the DS and 3DS, you’d think that perhaps Nintendogs might well be a contender. But with no such announcement in sight (unless you count a stage in Super Smash Bros. Ultimate), it’s fallen to developer Imagineer to capitalise on the gap.

Letting you adopt dogs or cats of various breeds to play with and care for in a virtual home, Little Friends: Dogs & Cats seems like a straightforward successor to appeal to anyone who was charmed by owning a furry virtual pet back in the day. But where it was a novelty back in 2005, it doesn’t really stand up to scrutiny today. Of course, such a game had its detractors back then too, but you can at least appreciate what Nintendo was going for by also taking advantage of its host hardware’s features in delightful ways. For Little Friends, there’s not really anything it manages to do to make it stand out - in fact, it achieves even less. 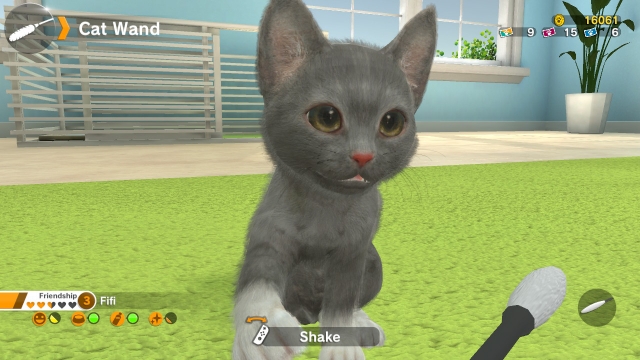 Most obvious is that the Switch lacks a microphone, meaning that even if you get to name your dog or cat, you don’t get the charm of getting to call them over or to teach them tricks. Well, these functions still exist, but when you’re just selecting an option with a button, it’s not quite so meaningful. Then there’s the complete lack of multiplayer or StreetPass functionality, which again this game tries to make up for by having your pretend-mum or dad give you a new gift for your pets each time you log back in.

You might think, well, at least this is a pet sim I can play on the big screen. But there’s good reason why Nintendo’s franchise had stayed on handheld and never migrated to home consoles before. If you’re thinking of seeing more impressive visuals, you’re in for a disappointment. The fur textures were groundbreaking at the time on handheld, but other than a move to HD, there’s not been anything of a graphical leap. As for being able to pet your little friends with the Joy-Con, the motion controls are so bad (even when you try calibrating) you’re essentially just waggling at the air. 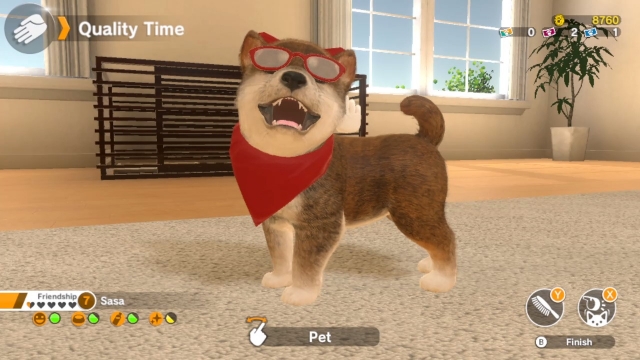 You can keep up to three pets in your house at any time, so can check-in your spares to the pet hotel in the plaza if you’ve got the cash. Those inclined to adopting cats will also need to raise their first dog’s level to 15 before you’re allowed to revisit the plaza. Is the wait worth it though? Apart from feeding, petting and brushing (you’re only told from a gauge whether a pet is dirty, it doesn’t really show up visually) activities are pretty slim. For dogs, you can take them on walks, where they can occasionally dig up treats in the form of bonus currency, or you can play some frisbee competitions with them. Cats naturally don’t take part in these activities, but there’s little alternative for them to do, apart from waving around a wand for them to scratch at, which really is as pointless as it sounds. Maybe that’s just reflective of how cats are in real life, but it doesn’t make for a fun game.

I’m sure there’ll still be an audience that will get a kick out of owning virtual dogs and cats, and buying the silly outfits that gradually unlock to let them wear, though even here there doesn’t seem to be much variety. You might find some comfort petting them on your touchscreen while doing the odd chore in-between watching Netflix after a long day, but then you might as well just pick up one of the many virtual pet apps you can find on your phone instead of paying full-price for a game that’s sadly both old and hasn’t learned any new tricks.

Adorable they may be, but having a virtual dog or cat was an already old idea that somehow has even less features and charm on newer hardware. Proof that not everything needs to come to Switch.