Long live cheap, addictive games: that's what I say! You know the ones, where you have an itch for some gaming but don't want to immerse yourself too much for whatever reason. I myself get these urges to have a quick game of something while I'm waiting for tea to cook for instance. I only ask two things of these kinds of games, and these are quick bursts of fun at a reasonable price, lots of bang for little buck. Both of these criteria are nicely met by Madballs: In Babo Invasion. 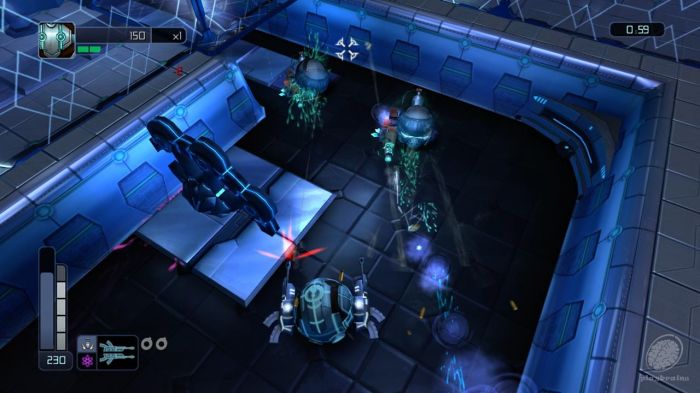 Madballs: In Babo Invasion, is well: mad. I remember the franchise briefly from my childhood, they were foam balls who apparently constantly fought against the Badballs, and this toy fad spawned a kids TV series too. At first I didn't remember who they were but all the nostalgic memories came back when playing the game.

Madballs is a "shooter/ roll around platformer". The basic aim of the game is to invade the enemy's bases, or blow them up, or just get past a base to get to the next area. You do this by taking control of one of the Madballs and roll it around one of many levels, shooting whatever gets in your way with your quite extensive array of guns. You then fulfil whatever task you had to do on that level and move on to the next.

To do the above you first pick which Madball you want to use. At first you are limited in your choice so I chose the one with the highest stats, namely a giant eyeball by the name of Oculus. After choosing your Madball you choose what weapon you would like it to carry. Again you are limited for choice at first but you do unlock more as the game progresses as you fill certain criteria. Each Madball has different attributes such as speed, power, defence etc, you have to pick which one you think would be most suitable for each level. For example, one level has you escaping from a base you have just burned down. There are lots and lots of bad guys waiting to get you as surprisingly, they aren't that impressed with you blowing up their belongings. The logical choice for this mission for me was a Madball called Robo who is made out of metal and has high defence and is quite nippy so I could get the hell out of there as soon as possible without getting damaged too badly. 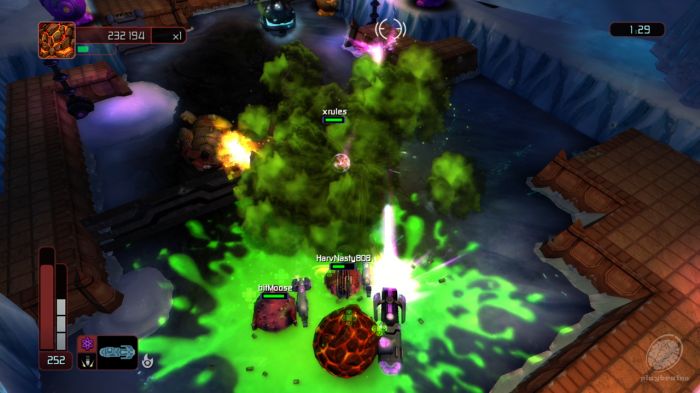 Once you have chosen you Madball and weaponry, it is up to you to navigate your way around and find your way to the end/goal. The first level sees you gaining entry into a temple which the enemy are using as a base. To do that you have to roll around various terrains such as precariously rolling along a really narrow bridge without falling off, trying to judge the twists and turns without rolling to fast, gaining too much momentum and flinging yourself into the firing line of about 10 Badballs. Enemies themselves are also balls who carry a vast array of weaponry and it's not uncommon to get around 10 ganging up on you at a time

This may sound quite easy but in reality its actually quite difficult as your ball has a habit of rolling far too quickly making it seemingly impossible sometimes to traverse the terrain. Add to that the amount of things wanting to kill you in intense fire fight situations and this game can indeed be pretty challenging, which adds to a game's longevity. Besides the sometimes tricky difficulty the gameplay doesn't suffer, it is a fun and original game to play. Adding further to the longevity of the game is the collection of secrets and other unlocks. There are 50 of each so this will keep the completionists out there busy for a while. Also for every kill you make you collect points which go towards unlocking further things such as weapons for all your lethal enjoyment.

Controlling your Madball couldn't be easier either, with W,A,S,D acting as your directional buttons and the mouse acting as your camera/aim help with left and right clicks used to shoot your weapons. It's all very simple and luckily isn't blighted by over complicated controls. Something which I sometimes find ruins games for me. 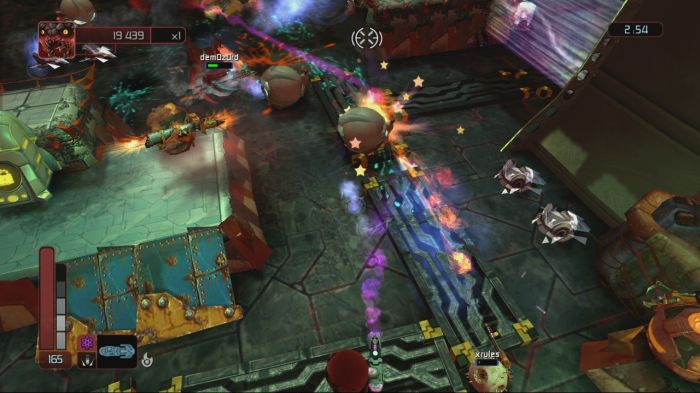 The graphics in the game look lovely too, very bright coloured and well detailed, it's all very vibrant and pleasing to the eye. Levels are designed well and all host a multitude of secret paths and walkways to gain extra items. Madballs are also well done, highly detailed down to even the smallest vein on Oculus being well animated.

Madballs: In Babo Invasion comes with several types of game modes to keep everyone happy. It has a 4 person co-op play mode which is a nice addition because these types of games are starting to gain popularity i.e - Left 4 Dead and Borderlands.
There is also a 16 player multiplayer mode for all your mass shooting needs. This mode has 12 new maps that players can fight to the death in. I was not able to test either of the above modes but I can imagine that 16 player would be completely manic and insane!

One downside to the game is its musical choice, some songs are infuriatingly annoying and ruin the experience a little but still I guess that's what the off button on speakers is there for right? Also the camera angles in the game can prove to be a bit annoying, especially when you are planning your route to take and you have missed something important because the camera is right in the way of it. Moving the camera is done with the mouse, but the mouse also aims at enemy's moving you slightly in the direction you are pointing which isn't very helpful when you on a ledge above lots of Badballs trying to kill you. The only other possible downside is that this game is more of a "pick up and play" when you have a spare 30 minutes kind of game, I think it lacks the depth that more serious gamers would look for, although the multiplayer aspects may have them coming back for more. 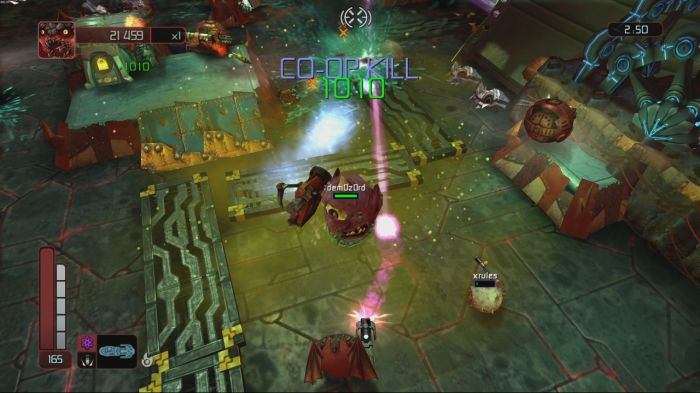 All in all, this game is great value for the price of it (currently £6.99 on steam). For that you get a very fun and sometimes challenging single player mode with tonnes of unlockables, such as: 5 different Madballs, 50 secrets and 50 different unlockables such as guns, bonuses and characters. As well as the great single player mode, you get 2 different multiplayer modes which add to the games longevity even more.

It's a silly, fun game, not intended to be taken too seriously. This is great for the casual game hunters but something that the more serious gamer may avoid. For the price, you get a lot of game, and it's quality game at that.

Just wanted to thank you for the review on this I never got to post about this before Christmas, but Luke bugged me to death about this game, after reading this one i picked it up for him and then i ended up buying it for me on one of the steam weekend deals what can i say, COOP :) you know how much we love COOP, Luke and i been playing it over Christmas quite a lot (and cheers to dawson for pointing it out in the 1st place)

your welcome glad you enjoyed my review :D Its a fun little game, had me completely suprised. Ill have a game on co-op with you guys if your about at some point :D

ohh Luke would love that when ever we do play, hes always explaining to me which weapon is which and which upgrades not to get etc :(

Ill have a go tonight with ya :D Not played co-op so be gentle with me!