Maquette feels like a game with two different things going on; the first being its unique and stimulating first-person puzzle mechanics that are a joy to solve, while the other is its touching and endearing love story between two strangers. While both of these things are great in their own right, Maquette’s biggest problem is that they don’t feel intertwined with each other enough, which is what makes this game good when it could have been great

Maquette is a puzzle game that features a thought-provoking mechanic that takes a little time to wrap your head around but stays fresh and unique throughout the five to six-hour experience. The world of Maquette is built like a Russian matryoshka doll where each new area has a miniaturised version of itself under a, well, maquette in the centre; the further you go outside the larger the world is and the further you go inside the smaller. The smaller/larger worlds mimic what is happening in each so what you change in the smaller world will impact the larger one as well. For example, moving an object in the normal world will also move it in the others as well, causing the object to be bigger in the larger world and smaller in the miniaturised one. Since there is a weight limit on what you can carry, you must use objects from each size world to solve the forthcoming puzzles. Most puzzles consist of placing normal objects in the smaller world or smaller objects in the normal world and exploring each sized world yourself as some areas you can only get to depending on your size. It’s not as challenging as most puzzle games in recent memory, but it does feel satisfying to decipher what needs to be done. The only thing missing from the experience was any sort of connection to the heart-felt story that it was following. Maquette’s story revolves around relationships and how they are – and have always been – complicated and you never really know where things went wrong until it’s over and you have the time to reflect/look back at how everything played out. The story follows the relationship of Kenzie (voiced by Bryce Dallas Howard) and Michael (voiced by Seth Gabel) from the very infancy of their love to its bittersweet end. Having real-life couple Bryce Dallas Howard and Seth Gabel be the protagonists in this game did wonders because they are absolutely phenomenal and you can feel the chemistry between them during the voiced sections. While exploring, the inner monologues and progression of the relationship are told through words that appear in the world giving insight into how they are feeling. Unfortunately, as mentioned previously, your actions in-game feel like they do not correlate with the story being told so it feels less impactful than it should be. 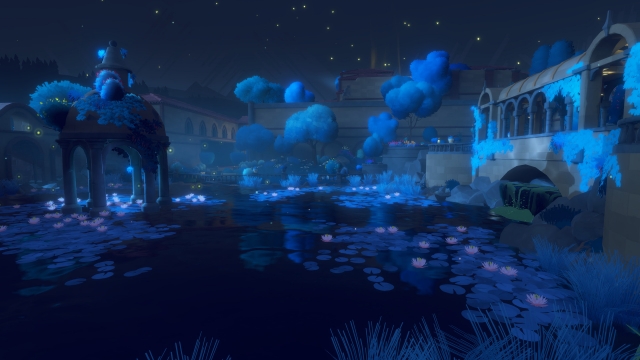 Visually, Maquette is a treat for the eyes for PS5 fans with a 4K HDR capable display with its beautiful art style that feels like a painting in motion, especially with all the legitimate painting-like motion graphics used throughout the game. While it does run at 60FPS, it doesn’t stay there as much as it should and there are a couple of severe dips down below 30FPS at points, but those are few and far between. Maquette also features a killer soundtrack featuring a few local musicians from San Francisco, California, where Kenzie and Michael reside. The developer said it was important because it wanted to play the music they thought the lovely couple would listen to. While my music taste isn’t exactly like Kenzie and Michael, I definitely enjoyed the songs chosen and even added some to my playlist as well!

Overall, Maquette is a solid and unique puzzle game with a sentimental, well-performed story that may hit a little too close to home for some, while maybe providing some closure for others. If only the developer found a way to intertwine the puzzles and the story together to feel more complete.