I grew up in the era of 8-bit computer games, so I tend to have a more lenient view on graphics in games than other reviewers on the site. When I grew up, one of the main things that we used to look for in games was colour. “What? This game uses a palette of 16 colours on screen at once? That’s amazing, how did they do that?” we would cry. Yes, we were poor fools who got distracted by bright colours and completely ignored how they would clash with each other and look horrid and garish. It didn’t matter that humans aren’t normally purple and nobody had black wallpaper in their house, we just marvelled at how colourful it was. This attitude has stuck with me and so to this day I do tend to gravitate towards brightly coloured games rather than cherishing the drab browns and greys that some of the more “realistic” games tend to go for. If I wanted brown, I’d get the Commodore 64 out and play on that. Anyway, this long ramble all serves as an introduction to Monochrome World, a game all about bringing colour to… well, to a monochrome world in fact.

You play as a raindrop who has to roll around, painting the floor in order to turn things from white to whatever colour they happen to be at the moment. It all sounds quite easy, however there are plenty of terrible tribulations to your tile-tinting task and these come in various forms. Some levels will have little Roomba-like robots that chase after you, whereas others will have spikes coming from the floor, precarious ramps, or buttons that activate bullets in your path. Your role is to control the unnamed raindrop (known in the game as simply “raindrop”) and navigate the maze-like levels to turn the tiles that make them up into a pretty colour. 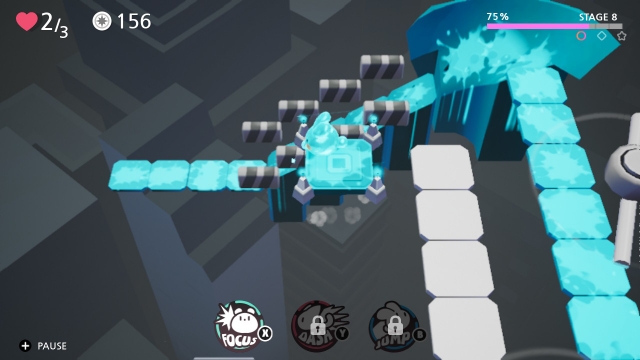 Along the way you will collect coins that allow you to unlock new skills such as slowing down time or jumping a fraction of a centimetre off the ground. These can be levelled up through the same mechanic allowing for more useful variants such as the ability to jump properly. You can also unlock new shapes for your raindrop, as well as accessories like hats and moustaches. These don’t have any functional purpose, but the shapes are absolutely adorable and I had a hard time deciding if I wanted to play as a bunny with a top hat or a Shiba Inu with a cat on their head.

The trouble with having the skills unlocked through coins is that they’re not always necessary to the game as a result. For example, after about 30-odd levels, I still haven’t found a use for the jump mechanic. Some levels require the skills to unlock extras before you could feasibly get them as well, so you’ll have to go back to get them. You can three star a level without doing this though, so there’s no easy way of knowing which levels to return to. I would have preferred skills to unlock through playing as they are needed so that the level can serve as a tutorial to their use. 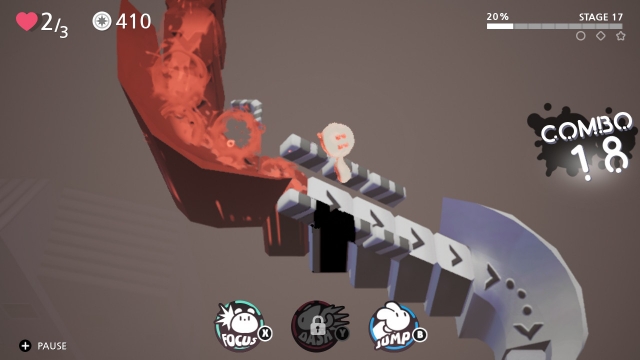 The pace of the game is somewhat sporadic, veering between sedate and speedy throughout. Your raindrop falls into each level slowly and controls are sluggish but momentum picks your speed up as you go. This makes it difficult to manoeuvre the more complex bits of levels without the focus skill that slows time down, and also makes stopping difficult after some of the steeper ramps, so you have to pre-plan your route carefully. It’s not entirely dissimilar to Marble Madness, and equally as frustrating when you die as a result of running too fast down a ramp that ended somewhere off-screen with not enough time to slow down when it came to an end. Every five levels you earn a new colour for your raindrop and this is awarded by way of an animation of the new colour slowly floating down into your character. I didn’t time it precisely but I estimate it takes about 47 years each time. 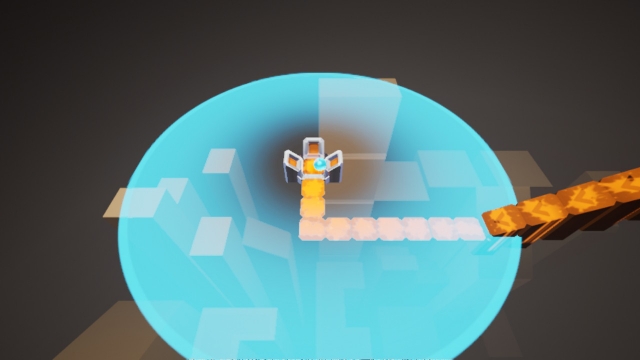 When all’s said and done, I found Monochrome World to be a bit of a mixed bag. I certainly enjoyed it, but the pacing and level design isn’t perfect. It’s a good game in short bursts but it didn’t grab me enough to play for hours on end like some other puzzlers have done. It feels like the sort of game that might be better on a mobile. As a Switch title, I just don’t think it does enough to be a must-have title.

It’s not the best puzzle title on the Switch and it has some flaws, but Monochrome World is a solid puzzler that’s enjoyable in short bursts. Don’t expect too much of it and you might have a bit of fun, but probably best to wait for a sale before purchasing.