Being a longtime fan of Hotline Miami, whenever I see a game in a similar style, I get intrigued. Having put so many hours into Hotline, I like it when developers take inspiration from Dennaton Games’ seminal title, but take their game in a whole new direction with the only link between the two is the concept. Mr Shifty is one such game.

Developed by Team Shifty, Mr Shifty places you in the shoes of an anti-hero breaking into a secure facility on a heist mission that goes wrong. Beginning on the ground floor, you work your way through the building of increasingly more difficult floors. Playing as the title character, you’re nothing more than a bad-ass with super powerful melee attacks and powers of teleportation to grant you an upper hand against your foes.

You get one life, but there’s always a risk and a reward. Be quick or be dead and from the opening levels, as you gain a grip of your powers, you feel like nothing more than a badass. Entering an area full of gun-wielding foes, you can teleport between rooms, avoiding gunfire and getting the upper hand from behind. Your shifting move can be used up to five times in quick succession before requiring a cooldown, but if you pace shifts they cool down faster. 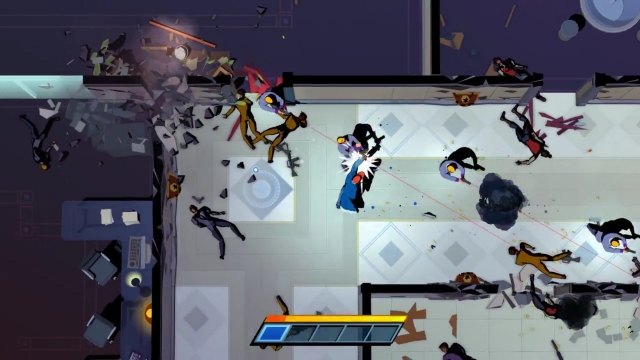 Much in the same way as Hotline Miami, you have to clear each area by any means necessary before you can proceed. Dying takes you back to the start to once more teleport and beat down the guards of the facility. There is enough variety to keep you going. Ranged enemies wield weapons ranging from pistols to machine guns and shotguns, while much bulkier guards will attempt to beat you down with their fists. Once you’re spotted they come at you from all directions.

Fortunately, you don’t just have your fists of fury: you can also use the environment to your advantage. Doors can be smashed and launched into a group of idle guards, objects like iron pipes, tridents and paddles can be used to smash groups into a pulp or launched at enemies to get that quick strike down from a distance.

There is one saving grace for a moment in the blaze of gunfire: as you fight you recharge a slowdown meter. As the bullets fire and you’re close to that brink of death time will slow down giving you time to shift out the way and strike back in a flurry of fists. It’s a neat concept and further embraces the comic book influences that make Mr Shifty different. 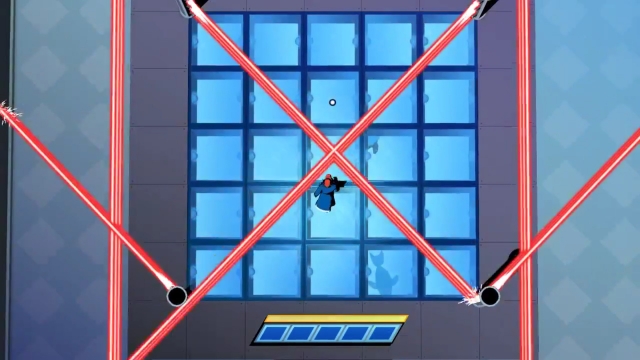 As you progress you’d want to play aggressively, but further in Mr Shifty soon takes a turn from all out brawls to an endurance puzzle requiring almost impeccable patience and timing. The game's villain Mr Stone throws a wrench into the works and unleashes a whole host of traps to stop you. Starting with laser grids you must either avoid or switch off, building up to machine gun turrets and rocket launchers, you’ll become increasingly overwhelmed which lessens the feeling of being a badass to more frustrating territories.

The biggest downside of Mr Shifty is the stark shift in difficulty. With your goal to head to the elevator, getting there becomes an increasingly challenging task and having only one life to do it in makes me wish for more checkpoints. Each level is broken up into stages, taking around 10-15 minutes to complete. Travelling between rooms clearing till the door unlocks is the aim of the game. However, getting killed ten times by a misjudged teleport or unpredictable AI in the process half-way between stages leaves you less encouraged to continue. You’d be best to prevail as quitting half-way means starting from the beginning of the stage.

Graphically, Mr Shifty takes on a full 3D cell-shaded style. Rooms are rendered similarly to one to another making the environments somewhat repetitive. The same can be said for the enemies, which are to put it simply, clones of one another. Nonetheless, this isn’t a deal-breaker as the overall aesthetics only further enhance the comic book style.

Mr Shifty is a hectic brawler that is enjoyable in short bursts. You can happily power through a few stages and feel like a badass while you’re doing it. It is, however, a short experience, but there are enough challenges, variety and enjoyment to be had. In contrast to Hotline Miami’s brutal difficulty, you’d think Mr Shifty would be Hotline-lite, but you’d be far from wrong as it can stand tall as being one of best top-down brawlers.

In contrast to Hotline Miami’s brutal difficulty, you’d think Mr Shifty would be Hotline-lite, but you’d be far from wrong as it can stand tall as being one of best top-down brawlers.