Naruto Online is a Massive Multiplayer Online Role Playing Game (MMORPG) with strategy elements. Playing as a Ninja/Shinobi tasked with overseeing the growth and development of Team 7. Relive the Naruto story, forming your own team and creating the ultimate combination to face off the series most formidable foes.

As a concept, Naruto Online is a solid game, featuring turn based combat with the conceit of the combat being about synergising your squad’s attacks - along with timing the use of Jutsus (special moves) - to win the battle. Following the Manga closely for the most part, it plays through the main story arc with filler content to make you as the player interact with the world of Naruto as if you were a character within that universe. 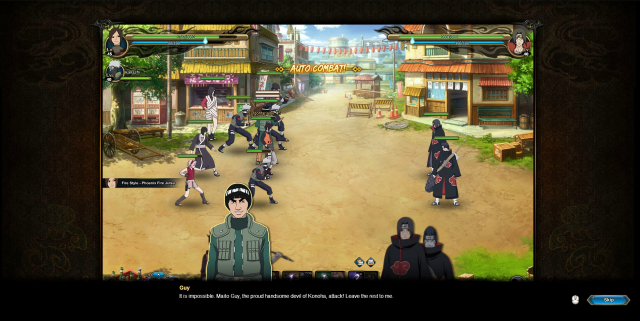 Translation oddities aside, this isn't the Maito Guy I love #WheresMyGuyStand?

But then there’s my biggest issue, the fact it’s labeled under the Naruto franchise. Having followed the series since 2006, the story feels tacked onto a game that would be entirely competent as its own entity with an original story. Parts of the story don’t match to what you do, disregarding you as a character in the world. Whilst other parts, namely filler content, grounds you to the Ninja world which leads back to the main Naruto story. But this isn’t capitalised on, which makes the lack of dialogue more apparent with its couple of sentences followed by more fighting. If it had taken a Dragon Ball XenoVerse approach in terms of narrative, riffing off the original content with its own spin, it would’ve made it a fuller gaming experience that could appeal to the most hardcore Naruto fans; but the Naruto story just feels tacked on content.

Like any free to play MMO, the game features a fixed energy bar (not changing based on level). Along with level requirements, it limits the progress through the main story. Whilst I did receive code for items in the game, these did little in the way of progressing through the game. The extra items for the most part are little perks that can go a long when trying to face tough enemies even if the numbers seem small, but can be gathered very quickly as I found when setting up an account with those items. The game suffers diminishing returns at an alarming rate when investing into the game, due to it being locked off after performing activities or purchasing goods (premium purchases). Injured battered and bruised I still the good in the game.

Revolving around having a four Ninja squad, taking turns, each Ninja’s attack can trigger their teammates to follow up the attack which create combos. This is a cool mechanic, but it gets bogged down with all of the systems placed on top. Facilitating brief playing sessions, as if to cater to towards the casual player, but then doesn’t contain enough content to give players incentive to continue playing. For instance, the games lacks a sense of real progression in terms of what you can do. You can create the ultimate team composition, but the actual combat mechanics are boiled down to the point it lacks challenge. It almost become a clicker for all intensive purposes, where the actual battles can be put into auto mode, since after the first round it becomes alarmingly obvious if you’re going to win or lose. Which isn’t all that great, even for a casual game, I can look at Crusaders Quest and say this is a casual game but has game elements that are more complex (excluding the minmaxing elements).

Not much has changed since posting my first impressions, completing to the iconic “Sasuke Recovery Mission” story arc (AKA “Valley of the End”). Gameplay issues persisted but remained enjoyable, with the content available being frustrating it’s not something I’ll continue playing. Hopefully the game fleshes out the base components, but if you want to experience a solid tactics style game, you couldn’t do better than look at Naruto Online. 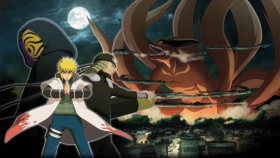