Growing up in the ‘90s with only Nintendo consoles, I am very familiar with the Mario Kart series of games. So any time I play a kart racing game, it’s hard not to compare them against the high bar the Mario Kart games have set. I have never had a chance to play the first Nickelodeon racing game, so there were no expectations. Over the years, I have watched a lot of Nickelodeon shows, so when I saw all the characters that were available, I was very excited. There is Rocko from Rocko’s Modern Life, Tommy and all his baby friends from Rugrats, Ren and Stimpy, the Teenage Mutant Ninja Turtles and especially Zim and Gir from Invader Zim. Man I love that show, definitely one of my favourites! 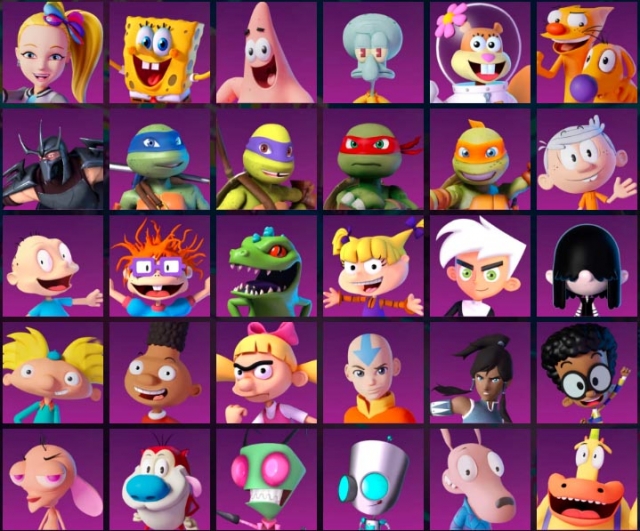 The characters are all 3D versions of the hand-drawn characters that you know, but the artwork is done well, so they don’t look weird and off-putting. Though, I did just unlock the JoJo Siwa character. That one is strange since they aren’t just converting a drawing to a character, but a real person to a cartoony 3D model. There aren’t just the main characters for the driver, but where this game really differs from Mario Kart is having a whole race team to support you. You are not only choosing a driver, but also the chief, crew engineer and crew mechanic. Each support character has their own unique abilities to assist you in the race. Lil and Phil from Rugrats can throw mud pies at your opponents and Pearl from SpongeBob will give you a boost anytime you jump off a ramp. There is actually a lot of strategy that comes into play with your selections. Personally, I like the support character who gives you a boost after you are hit by an item, which makes it a lot less devastating if you are constantly getting hit. 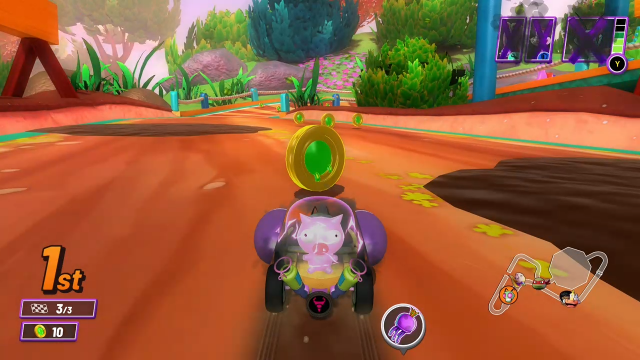 Nickelodeon Kart Racers 2 offers a large selection of tracks and play modes to check out, with three different speeds: Slow, Medium or Fast. The tracks feature music from the shows and are based on the environments from the shows like Foodcourtia, the intergalactic food court from Invader Zim. Single-player mode gives you options to race in the Grand Prix, do a time trial or challenge mode. When challenges are completed, you can unlock new support characters or items like engines for your kart. If you visit the Garage, you can spend the slime coins that you picked up and earned during your races to use as currency to unlock new items for your kart. The Garage has engines, exhaust pipes, paint jobs or tyres to customise your ride for the race, you just have to figure out which of the stats is most important to you; top speed, steering, drift or boost. 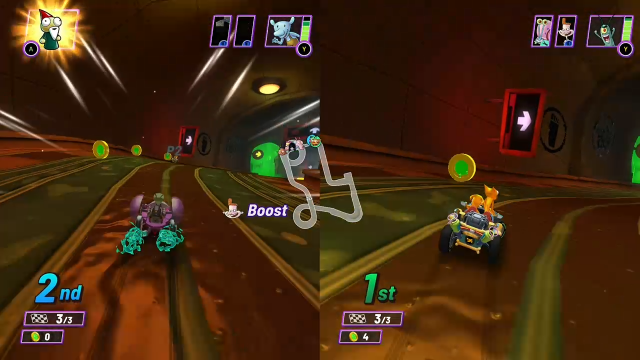 When you don’t want to play by yourself, Nickelodeon Kart Racers 2 offers local and online multiplayer modes for up to four players. You can see who is the fastest in a race, or battle it out at the TV studio. Split screen Grand Prix racing is always fun, or you can challenge a single track if you don’t want to do all the races in a cup. If you want to just have a straight on fight, Battle Mode has you duking it out on one of the sets for the Nickelodeon game shows, like the Double Dare set, or the arena for the Nickelodeon Kids Choice Awards. The rules are simple: whoever hits any of the opponents a total of ten times, is the winner. There are battle items spread all over the level, so you don’t have to search for weapons to use. An item ball is always nearby, so the weapons are always flying around.

You may be thinking to yourself “okay, so there are a lot of characters and tracks. Is the gameplay any good?” I am happy to say that the mechanics are quite good! Especially if you have played any kart racing games, like Mario Kart before, you know how this works. Like many other racing games, you have the option to drift, throw items at your opponents, brakes to slow yourself down when you are trying to take a corner too fast and a rear view mirror to see who is riding your tail, but, there a few different additions like a button to perform tricks when you see half pipes and a button to summon your drive team chief to perform attacks on your opponents. 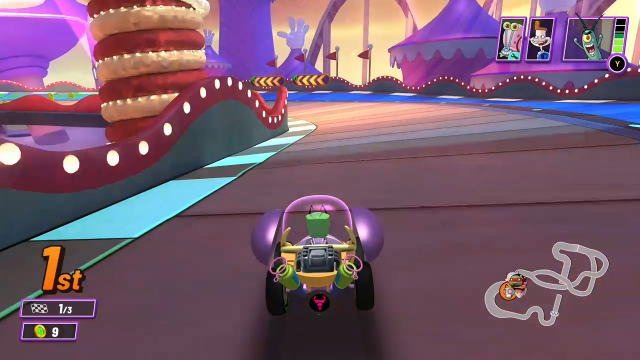 Nickelodeon Kart Racers 2 is a solid game. It doesn’t really reinvent the kart racing genre, but there are some really neat additions to make it stand out. Though I did notice that while playing multiplayer, the game would sometimes stutter for a split second. It wasn’t a huge deal but just a heads up. With such a large selection of characters from shows spanning from the ‘90’s to now, there are characters to make not only kids happy but adults too. If you are familiar with the Nickelodeon catalogue of shows, there are tons of drivers and support characters to unlock, this game will definitely keep you busy for a long time!

A fun kart racing game that offers four player local and online multiplayer with a huge cast of characters from the Nickelodeon catalogue of shows that you can use to build your dream racing team. It has you racing on tracks inspired by the cartoons and featuring the music you know. 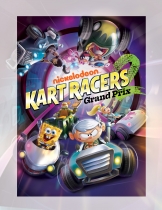