I was excited about the opportunity to play Off when I first heard of it. Having previously played other great titles coming from RPG Maker like Lisa: The Painful and Undertale, it fit right into the niche genre of using unique RPG elements to tell a powerful story. My hopes were high for it to fall into this niche as I began to play the game. 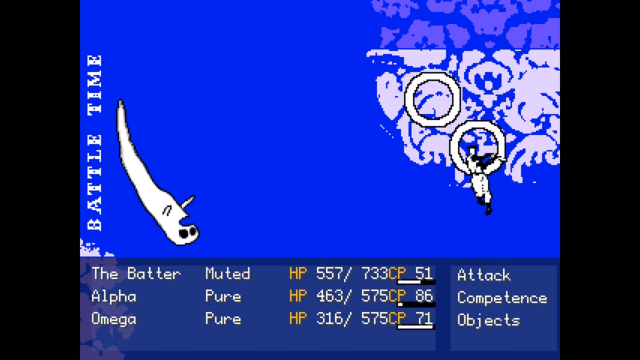 The game throws you right into a tutorial, showing you the ropes of the game. The in-combat menu is certainly something to take note of. You’re given the option to fight, either manually or automatically, and to flee the battle. Under the fight option, you can use basic attacks, competences, (which are special attacks), objects, (which are items you can use to heal yourself), and the flee option. When you select fight, you have a meter that slowly fills, allowing you to take your turn. As you gain more members in your party, it becomes more difficult to take your turn right as the meter bar fills. This is the non-traditional element that Off adds to the RPG element of the game. By managing your attacks faster, you’re able to maximize your damage, so keeping your items organised and knowing what your competences do is important for the most efficient combat.

Once done with the tutorial, you’re thrown right into the story without being given much backstory. Upon entering the first zone, you’ll soon be met with the first of many puzzles in the game. These puzzles are satisfying to solve without being too difficult. I did find myself taking pictures and writing details down to solve some of them but that moment of “aha!” you have when you’ve finally pieced together the details needed to proceed is great. Given the small amount of control you have in the overworld, the creativity of these puzzles and the difficulty in figuring out what you need to do is amazing. In my experience, most games rev up the difficulty in their puzzles by introducing new controls to your character. Instead, this game manages to do that without adding any controls, instead making you pay close attention to the story. In my experience with playing RPGs, the puzzles present in this game are some of my favourites I’ve ever encountered. The bosses in the game are a whole different story, though. It’s difficult to gauge the effectiveness of your party against them. The bosses seem to do so little damage against you but have massive health pools. Even though you can check their weaknesses, it’s often easier to just use brute force and speed rather than strategy. This leaves much to be desired when compared to other RPGs in the same genre. To add on this, the game has an absurdly high-level cap and allows you to keep learning moves that increase in power far past what you need. Even playing through the game rather quickly, I didn’t lose all my party members even once and hardly needed to stock up on items. Overall, the game could add some difficulty to its combat and still maintain its ease of play.

The music and sound is nothing elegant, yet still succeeds in creating a matching atmosphere for the game. By the end of the game, I was exhausted from hearing the psychedelic, whispering track but it’s obvious that the music is only trying to clue you into something. Aside from the track, “A Stab of Happiness,” I can’t say I enjoyed listening to most of the music. Additionally, some tracks in the game don’t loop correctly, ruining the immersion. The soundtrack for this game is still great and characterises a tension that is needed to pull you along and make you continue to want more.

Something else to notice is your conceptions of characters as you move throughout the game. One of the characters, The Judge, is nothing more than the annoying tutorial character at the beginning, one that you simply want to skip past. The way in which Off utilizes its story development is magnificent in this way; as the game goes on, you start to sympathise with them and he even became one of my favourite characters by the end of the game. The story pulls you in and flips your expectations for the game on their head. I expected boring characters and out of touch dialogue when I first saw the game’s monochrome, almost lazy visual design but came to love how it misrepresented itself by the end of my playthrough. Overall, this original misdirection in the story leaves you constantly reevaluating how you view characters and really makes you feel like a part of the game, much like your inclusion as the character, “The Puppeteer,” would suggest.

By the end of my playthrough, I was craving more exposition, so I read through every detail the wiki had to offer. The game has so many minute details that are easy to miss on the first playthrough and a lot of minor errors in the script that come from the game being translated from French. The puzzles and story play on each other to craft a unique experience for the player. The music and ease of progression ruin the immersiveness of the gameplay a bit but it's not too noticeable given the attention to detail to other parts of the game. Overall, the game offers so much given the fact that it’s free to play and I highly recommend it. Give this game a try if you’re looking for a laidback RPG with a great story.

A great indie game that merges adventure and RPG with an enticing story. The depth of its story helps pull together the game and makes for a memorable experience.