One Step From Eden Review

I’ve reached a point where I’m now a little wary of games that are described as ‘roguelikes’ or ‘roguelites’. Don’t get me wrong, I love titles like The Binding of Isaac and Nuclear Throne, but many games use procedural generation as an attempt to mask their lack of content. So, when One Step From Eden was shown off for the first time I was cautiously optimistic. It seemed to be an evolution of Capcom’s long-dormant Mega Man Battle Network series, taking the grid-based gameplay and turning it up to 11. However, it was hard to tell if this style of game would work when turned into a roguelite. After many hours and playthroughs of the full release, it’s a shame to see my fears for One Step From Eden were not misplaced, though it’s not all bad.

As is the case with most roguelites, little time is spent on One Step From Eden’s story. In fact, a single line in the game’s Steam description is more information on the game’s setting than you’ll get when actually playing. Again, nothing too uncommon for games in this genre, but it’s certainly going to be a change of pace for Battle Network fans. 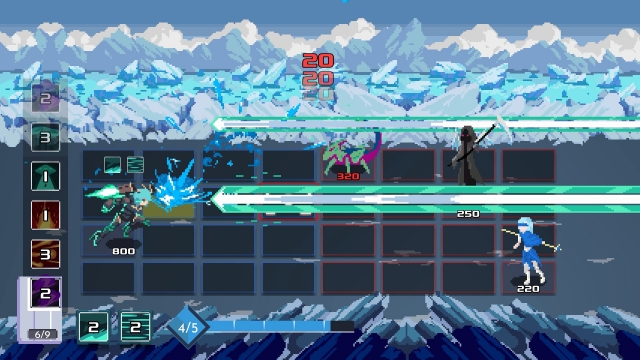 At its core, One Step From Eden is a mashup of Battle Network combat with the deckbuilding and area progression of Slay the Spire. After choosing a character — each one having their own weapon, a unique starting artefact, and a set of spells — you’re thrust straight into your first battle. Each battlefield is made up of an 8x4 grid, with movement of your character being restricted to half of this. Spells, the main way you attack and gain beneficial effects, also make use of this grid system. Most spells hit a certain number of tiles away or affect specific tiles, so positioning is often a key part of each battle.

Going through a few of the initial encounters, One Step From Eden didn't seem too different from the Battle Network series. Aside from the deck system, which doesn’t let you choose what order you use spells in, early battles are quite laid back and give you time to figure out your next move. It’s not long before this changes though, as each battle gets progressively more difficult and your spell count increases. How you unlock spells is one area of the game that doesn’t quite work in conjunction with its difficulty level. 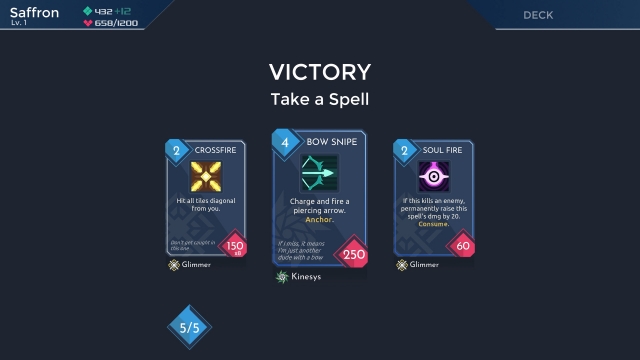 Aside from the initial spells your character has, your deck is made up of random spells gained after battles, or ones purchased from a shopkeeper in each area. There is a feature that lets you increase the odds of certain cards appearing, but it’s still mostly just luck. Since many spells rely on certain gimmicks, such as trinity spells needing you to have three stacks of the trinity buff for bonus effects, if you don’t get the right ones by a certain point it can be hard to defeat some of the tougher bosses.

Speaking of bosses, they’re by far the strongest part of One Step From Eden. Each boss has their own attack patterns that are usually fun to memorise, and it feels like the game is generally designed around these boss fights instead of regular encounters. It’s just a shame that there are so few bosses overall, with each character, aside from the final boss, being encounterable no matter how far you are in a run. Bosses are powered up if you fight them at the end of later areas, and defeating them will unlock them as a playable character, but it’s not long before you’ve seen most of what they have to offer. In fact, a lack of variety is by far the game’s biggest flaw. There just isn’t enough here to make each run feel distinct from one another. Spell synergy, despite being a key part of how you build up your deck, isn’t particularly interesting. Even with the wide variety of spells and artefacts (items that give certain passive or immediate bonuses) that you can acquire, the best combinations are generally the most boring too. With how difficult the later fights can get, there’s little incentive to attempt to build a more unorthodox deck when death means that you must start again from the beginning.

It’s a shame that the roguelite structure of One Step From Eden hampers the game overall. When everything is working together, as you fight a tough boss with a good set of spells, it feels like a true successor to the Battle Network series. The game’s fast pace, combined with some inventive boss attack patterns, makes for an enjoyable experience at times. During these moments, you can really feel what the developer was going for, as you dodge and counterattack while paying attention to your spells and positioning. Unfortunately, most of your time is instead spent fighting the same sets of enemies with little to no breaks in-between.

One Step From Eden (Reviewed on Windows)

With how disappointed I am in the final product, it’s still hard to call One Step From Eden a bad game. The boss fights are memorable, it has an appropriately fast-paced soundtrack, and for brief moments it can feel like a complete, cohesive experience. However, the roguelite elements are just not implemented well enough to make each run feel fresh, and actively work against the decent core battle system.

One Step From Eden Review

There are 3 final bosses + a shopkeeper boss fight. The roguelike format is supposed to encourage deck creativity since the stakes are lower... "Lack of variety" being this game's biggest flaw? Please inform me what game you are comparing this to.

One Step From Eden