There’s more than a couple of physics based platformers out there these days; Organic Panic is one of the better ones. Being one of the kickstarter successes we hear of so much it’s a fast paced little action platformer with what has to be one of the weirdest premise on earth. Meat and Cheese have declared war on all that is good and right with the world using superior technology to enslave the wholesome magic wielding hippie fruit and vegetables.

Being wholeheartedly sick of this oppression, the remaining verdure set out to rescue their leguminous colleagues and deliver a good kicking to the victuals that have generally stuffed up the planet. This involves a kiwi that can spit water, a fireballing carrot, and a cherry that appears to suck whatever he is stood on through some nefarious orifice and fling it at whatever he is stood in front of with gay abandon. Standing on metal for example allows him to smash his way through wooden barriers like Jack Nicholson through a hotel door. 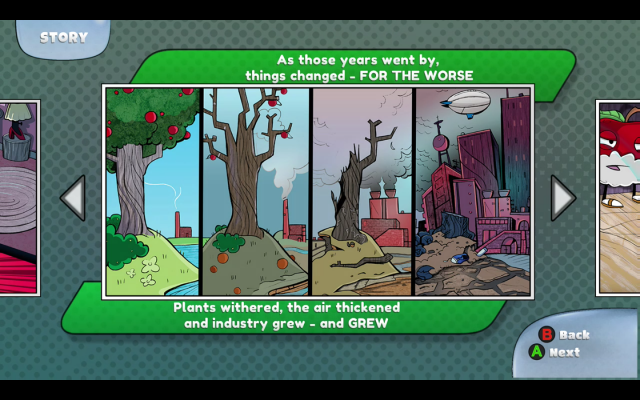 The game itself is loaded with bright graphics, bouncy tunes and satisfying sound effects like the sizzling sound when a steak walks into a patch of burning ground. These complement the Destructible and Fluid Technology (D.a.F.T) engine’s ability to let you ignite or break pretty much anything you find. Although it must be pointed out that even if it is a lot of fun to go all Heath Ledger and just watch the world burn, it can leave you unable to snag bonuses and the like so a modicum of restraint is in order (sometimes).

Some levels give you more than one character to play with, meaning you have to work out how to best beat the challenges of that level with the abilities of each. Each one being powered by little blue magic sparklies you pick up as you make your way to the big purple swirly exit portal at the end of the level. Now this seems simple enough, but that magic is a finite resource and in the way are blades, rollers, switches, steaks wearing boxing gloves, martial artist cheeses and the other technological troublemakers that must be killed or avoided in order for you to get to your goal.

This isn’t some major epic game, let’s be honest about that, but it doesn’t try to be. It’s a fast paced little puzzle platformer with multiplayer (great fun, and not at all a licence to fireball your mates… honest), a level designer, and 200 levels of single player mayhem to rip through that lends itself equally to a quick pick up and put down “waiting for the Final Fantasy XIV servers to come back up after maintenance” giggle as a major “going to rip through 20 levels or so” session. You’ll have a blast however you approach it. 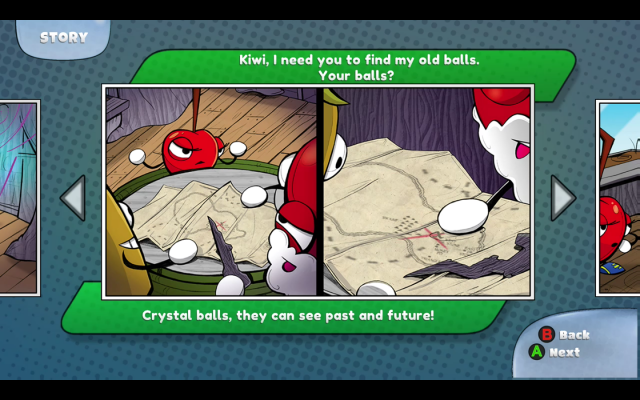 Organic Panic (Reviewed on Xbox One)

I really liked Organic Panic not least for its whimsy and lack of pretension. It is what it is, a neat little game well worth the price tag, Go buy it for whatever platform you choose, Xbox One, PlayStation 4 or PC. You won’t be sorry.