Long long ago, a 12-year-old Mister Woot bought a book in a branch of Games Workshop. Over the following years, joined by a group of erstwhile roleplayers, hilarity ensued, clones died in various ways, the computer executed people and childish jokes were made.

Now, thanks to the efforts of Cyanide Studios I expected to be transported back to those happy days in digital form, but with fewer spilt drinks, lost dice, and annoying parental interruptions. Alas, it was not to be.

The world in which Paranoia: Happiness is Mandatory is set is a dark future in which we have successfully nuked ourselves to death and the few remaining people live in underground complexes. All so fine and dandy and very Fallout. Unfortunately, when the bombs dropped,, the massive AI that runs the show was only partly finished, its memory had only been filled with events up to the McCarthy era in the USA and as such was obsessed with "reds under the beds". This has resulted in friend Computer being worried about Communists, treason, secret societies, and the possibility of mutation in the populace over which it stands guardian. A population of clones.

With this background, the game of Paranoia: Happiness is Mandatory raised my hopes only to dash them on the jagged rocks of mediocre gameplay, bad design, generic puzzles, frustration and idiocy. This point and click CRPG is what happens when people have not learned from Duke Nukem Forever. Not in the "oh god it's taken decades to make" stakes, but in the humour.

As an isometric point and click the game is easy to get into, the user interface is nicely intuitive and easy to understand, it's the design decisions made by the developers that are the letdown. Checkpoints are few and far between and there's no manual save, so when you (inevitably) get it wrong it's back to the beginning of the mission for you Mr Troubleshooter! Unless of course you want to try and remember at which part of the mission you last had a checkpoint at and where you were in the mind-numbing maze of bureaucratic nonsense that would put Sir Humphrey Appleby to shame. 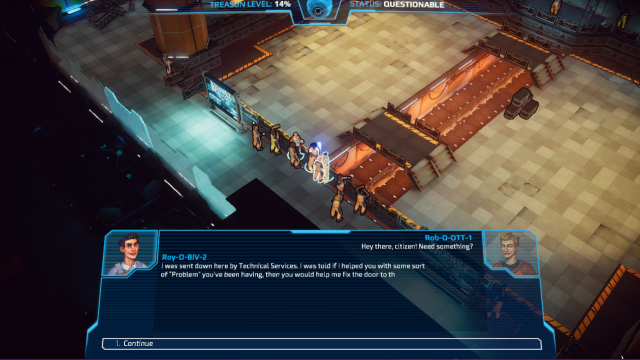 The sad thing is that there are glimmers of the old pen and paper RPG in here. The insane side quests involving testing items for the Research and Development department (which include a tinfoil hat), finding people playing LARP in disused bits of the complex, and so on. But none of them lifts the game out of the morass of dodginess. Even the end of mission debrief and the associated prisoner dilemma where you decide whether or not to report on your fellow troubleshooters for any treasonous behaviour doesn't feel like it has any consequence to it. Yes, it can result in that teammate getting a swift laser shot to the back of the cranium or a one way trip to an execution booth but they have another five clones so why worry? Drop them in it, blame everything on their treasonous behaviour and make yourself look good so you get a higher security clearance and more toys. 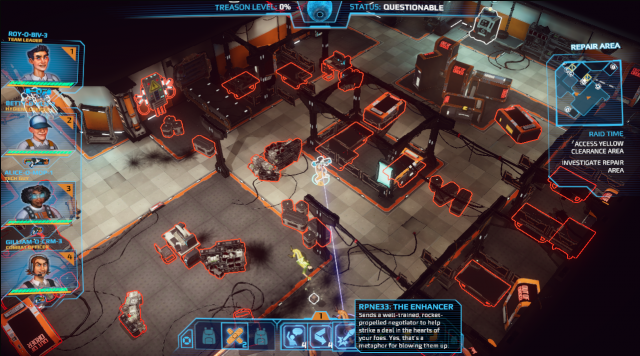 The Rocket Propelled Negotiation Enhancer mk33. For when you really have to get your point across.

As for the consequences of treason for yourself, they are about the same. "Oh dear, I was naughty and got myself in trouble, what shall I do?" Pop along to one of the confession booths and lower your "treason level" by answering questions if you still have a few visits left (they are limited) or just take your lumps and pop back to the mission later with the number at the end of your name one higher.

Black Shamrock have tried hard with this adaptation of the RPG, the visuals are bright and engaging, the audio is solid enough, and the controls aren't as clunky as the console versions of the Baldur’s Gate games for example. Alas, the enjoyable part of the original tabletop RPG was the players. The lack of interaction with your fellow man as you desperately try to expose them as a mutant and shop them for membership of a secret society all the while keeping your own treasons secret was half the fun! Missions be damned, there's treason afoot and thermonuclear hand grenades to test! If you find yourself knowing the definition of the word "fish" report for your complimentary brain scrub.

If you're not as old as dirt and able to remember when "t'internet was just fields" you're probably going to enjoy this game, it has some nice quirks and some fun in there to be had. I just wouldn't recommend going out of your way to buy it.

Happiness is mandatory, the Computer is your friend, and this game is mediocre at best.

Welcome to the Alpha complex, friend computer wants you to play this game and be happy. Not being happy is treason! This steaming pile is going to make you very, very, treasonous.

Man, that's a timely review. Way to keep on top of the industry.