It's 3:00AM. You have to get up in four hours for work. There's a party rudely raging outside and you've reached your limit. It's time to Party Hard 2! But not in the same way as everyone else...

This game might be a bit too fun: it's really cathartic for a person like me who happens to have live bands next door on occasion and I don't even live near a bar or a pub. Nope, just my neighbours! My loud, loud neighbours. So what's a girl to do in a situation like this? Play Party Hard 2 of course! 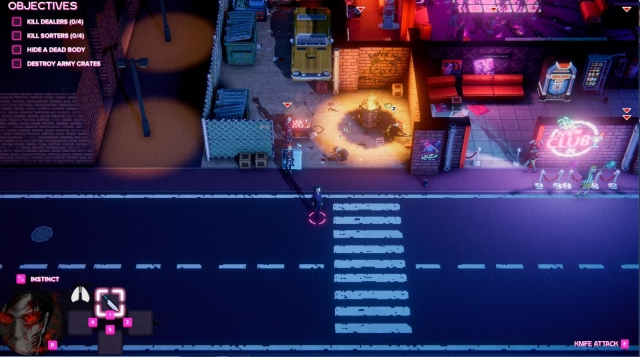 So what's the premise? It's the same as the first game in the series: stop the parties, and by any means necessary. I mean, after all, rest is very important and these people are costing you a good night's sleep! Sure, the premise seems violent when you realise stop means: blow things up, plant poison, throw Molotov cocktails, get people drunk and the general murder, but it's just a game. So the more imaginative the better, as long as the party stops and you reach your goals!

In this sequel, it seems your specific targets may be baddies, so at least there's that. This isn't Hatred where you're killing indiscriminately (unless you want it to be). Developed by Pinokl Games in the Ukraine and published by tinyBuild Games, the Party Hard series is one that I've liked since the first game. They have made some vast improvements from the first title to this one as well, including different characters to play and even more options as to how to carry out your own personal mission to end all parties. 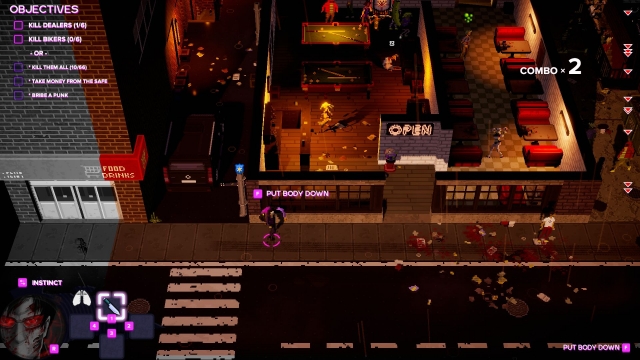 Adding to the charm of the game is the pixelated style, though even with Windows 10's colour blind settings, I lost my character a time or two. There is a lot happening on the screen and the characters and objects are quite small, so if you have any sight issues, you might want to play this one in full screen mode. Due to this, though, I feel I took my time learning the game and the levels. Don't expect everything to be where it was the last time you played a level, though, as some items are randomly generated.

Speaking of items, keep an eye out for crates that can be opened, they tend to have interesting items that may help you on your way. Such as a condom which I decided to try giving to a bouncer who had previously beat me up. Turns out that's a great idea! Bouncers can't kick your ass if your bouncer boyfriend is kicking theirs first! I probably laughed for a good five minutes about this. My favorite part was I played as a male character, so props to the game designers for not giving a crap about that, I salute you! My second favourite feature might be the dancing, though, because why kill the party when you can be the life of it, eh? Learn to have fun rather than kill, who needs sleep when you can dance the night away with all of your new friends! As long as you don't directly attack anyone, you should be able to still carry out the objectives of the level and dance to your heart's content. Even if you're the nicest person in the world, a little bit of you is curious about this game, admit it. It's the time of year for Christmas, holiday, and New Years Eve parties and some of us may be dreading those nights. Hoping beyond hope that your neighbours will forget to call the mariachi band this year... Party Hard 2 is a great release from our frustrations! Dance the night away, but don't slip on that puddle of blood! Let's ring in a great 2019 by painting the town red.

This strategy based game focused around diabolical murder in order to get some much needed sleep is absolutely wonderful. Different characters, levels, and so much in each level to explore! Definitely worth a look, especially if you need to relieve some stress from frustrating neighbours who maybe party too much.