Phantom: Covert Ops has you taking to the waterways of an old Russian base in your tactical kayak, armed with a sniper rifle, SMG, pistol and some other goodies like your night vision goggles. Oh, and of course your paddle. Because you’re not getting out of this shit creek without it.

From the surface, the concept seems entirely bizarre, but on first hearing about this title, there was a feeling that it could be something special, something VR hasn’t really seen before. Let’s dive in (pun intended!) to the kayak-shaped elephant in the room. On first glance, the limitation of being in a kayak may seem at odds with being stealthy - but au contraire, you can glide across the water making very little noise at all whilst scoping out the situation in front of you. As an additional bonus, that makes Phantom: Covert Ops more accessible to VR gamers that can’t stand and jump about since it’s an entirely seated experience. Picking up your paddles at the start and moving off is incredibly satisfying and one of the best locomotion implementations I’ve witnessed in a VR title. If you can stomach it, make sure you go for smooth turning too, as it adds even more to the flow of your movement within the game. 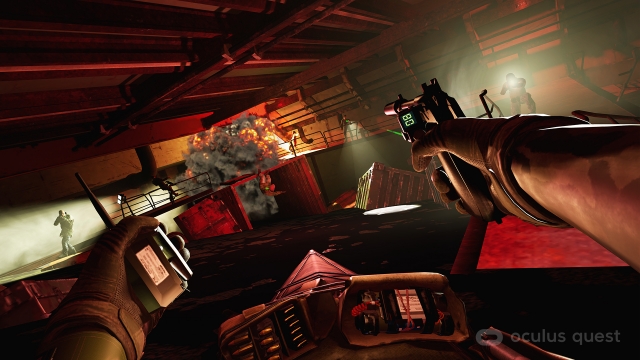 It can be a truly heart racing experience at times, as you come up on a collection of enemies whilst you’re gliding your way into a section of tall reeds to keep you hidden. Do you take the entirely silent route and wait for them to pass? Or do you go all out and blast your way through them? Maybe set off some environmental triggers to distract them as you sneak by. The options are yours to choose, and whichever you do choose, you’d best make sure that you execute it well as you’re scored at the end of each mission based on how well you do, adding a certain amount of challenge aspect that will keep the replay value higher than if this was just a straight through campaign. You’ll find yourself saying “I can do better than that” many times whilst watching your score tot up at the end.

When pulling the sniper rifle up to my eye, I realised just how breathtakingly atmospheric this game can be, in a literal sense. There I was, a Phantom, lining up a shot to take out a prized target. I was having to slow my breathing to better level out the crosshairs, waiting for the best moment to strike. “Do I try and distract the person he’s walking with first? Or, do I double-tap and take both of them out? Argh! There’s another guard watching this area now, so I’ll get their attention too.“ Your mind becomes conflicted with running different scenarios in a situation where you have to keep your cool as one wrong move can almost certainly signify your own death warrant, as you can be taken down just as quickly as they can. 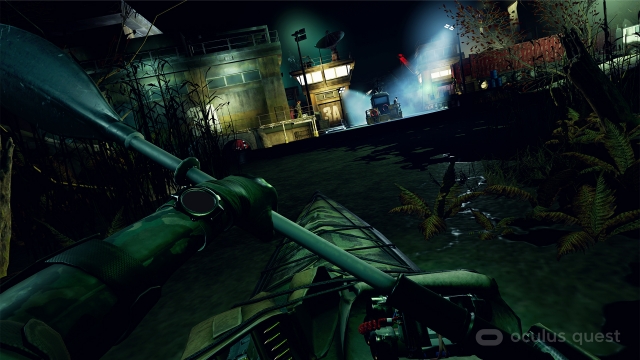 The soundtrack to the game really heightens the sense of suspension, as it leans into how close you are of being detected, becoming faster as the tension heats up. And just as you can, the enemies give themselves away at times with audible clues of their locations, talking and whistling for example, which can assist in your plan of action. It's all beautifully spaced in the 3D environment, and I'd highly recommend using a decent pair of headphones to get the best out of the spatial awareness it gives.

This pairs well with the graphics on offer, with sweeping light beams from enemy torches or areas bathed in light from various flood lighting serve to highlight locations that you're likely needing to pass to continue. Some of the far-off or darkened areas appear to be lower in terms of quality, though, but that's probably more of a performance concern than anything else. 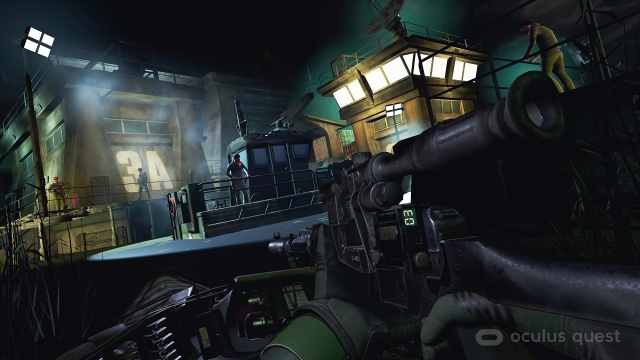 The tunnel sections of the waterways can be something of a detriment to your oars though, with one in particular becoming a clipping nightmare sending me left and right as it thought I was trying to push myself away from each wall. It also wasn't too friendly with me trying to brake in one of them as I was gliding out into what I realised was the view of some bad guys, so I started trying to back peddle to stop instead and the only thing I could get to happen was losing my calm, collected approach that I had planned on taking. I do wish that the early tutorial sections were a bit more apparent, giving you better instruction on paddling early on so that you can make it round corners without bashing the walls like I did. To someone that's done kayaking before, this will all be second nature, however, doing larger sweeps into a particular direction took me a while to get used to.

As a tip... Learn how to paddle backwards.

It’s easy to see why Phantom: Covert Ops received the commendations it did at E3 2019, and it’s now taken the second spot on my personal recommendation list of must-have VR titles. Here’s hoping this isn’t the last we’ve seen in the Phantom line.

This looks totally mint, have been wanting a new game for my quest for a while, on my to the Oculus store I go :)

VR gaming is seriously going from strength to strength this year. As for a sequel? Here's hoping for a canoe co-op mode XD 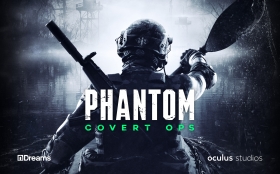