Objection! Take that! Hold it! These three phrases are what you’ll be shouting in your sleep after playing Dual Destinies, as they’re belted out every two seconds in a speech bubble that threatens to blind you if you have the 3D switch set to max.

Phoenix Wright’s catchphrases are almost more legendary than the lawyer himself, but Dual Destinies is far from a gimmicky game, it’s the most fun you’ll ever have pretending to be a civil servant. That doesn’t say much, as we doubt being in a career that deals with criminals on a daily basis amounts to much fun, but Capcom’s endearing law series does a damn good job of making something that should be dreadful into a piece of entertainment. You don’t need to have played previous games to enjoy the fifth installment of the series, but in case you’re clamouring for some backstory, the premise is as follows: Mr. Wright has returned to service after losing his license for falsifying evidence. Fresh out of law school and into Phoenix’s ‘Wright Anything’ firm is Athena Cykes, a bubbly lawyer who has started her career in the middle of ‘the dark age of the law’ - a period where the public distrust the justice system due to an event that occurred seven years ago.

Split into five seemingly unrelated cases (read: they’re all related to one incident) that occur over this seven year period, Wright and his team take on each case to put an end to the dark age. You begin by taking control of the first of these, which acts as both a tutorial and an introduction to the easy to grasp mechanics and characters.

With the exception of this introductory course, each case is split into investigation sequences and courtroom sections. The former - which you’ll be doing at the start of each episode - tasks you with snooping around each crime scene and the immediate area by moving between static locations, gathering evidence and interviewing some rather memorable witnesses. 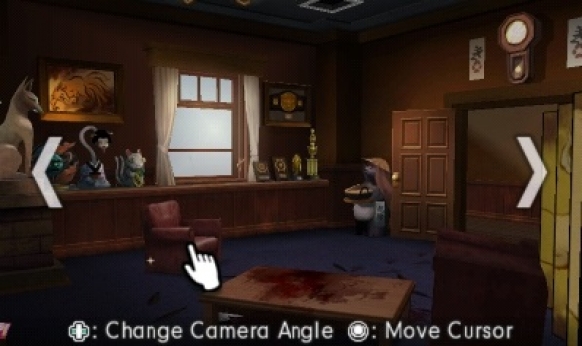 The latter forms the meat of the game; using the aforementioned evidence and testimonies, you cross-examine each subject involved in the case, presenting evidence that contradicts their statements. It turns out though, that everyone in the world of Phoenix Wright is a liar, so sometimes evidence isn’t enough to stop the drivel from spewing out of peoples mouths. This is where the hidden abilities of each protagonist comes into play.

Phoenix, Athena and Apollo each have a gadget that allows them to further scrutinise their witnesses. Athena’s talking necklace - Widget -allows her to listen in for misplaced emotions, Apollo can detect tells - much like in a poker game - with his bracelet to discover when someone is lying; and Phoenix can break psyche locks to discover repressed memories. Each one of these takes the form of a mini-game, which, upon completion reveals more necessary evidence. None of them are overused either, making them a nice change of pace. 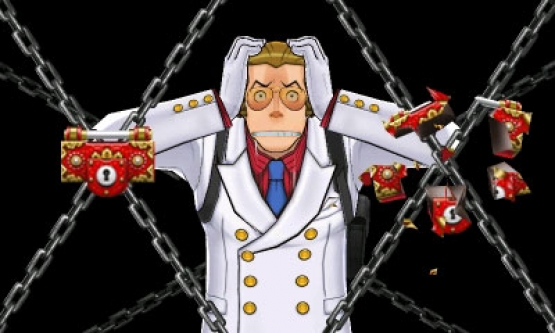 If at any point you do present the wrong evidence, there’s little consequence. A small bar tracks how many mistakes you can make per case, if you present the wrong evidence, the bar takes a hit. If it reaches zero, your client is found guilty and the courtroom doors are slammed in your face. In all honesty, it’s a pointless system, as you restart where you failed. One can only assume that Capcom left it in to make sure you know that you suck at being a lawyer.

Regardless of the above though, Dual Destinies is great fun. Presenting each piece of evidence and probing each statement correctly will make you consider whether you should have pursued a career in law. Keep your day job though, because a real courtroom judge as lackadaisical as Dual Destinies’ bald Santa Claus wouldn’t be there to save your ass when you screwed up.

There’d be no doubt about giving Mr. Wright’s first 3DS outing an even higher score than we’ve given it, but the game does suffer from some real issues. Capcom clearly designed the courtroom drama to be a game that’s played sporadically. The episodic structure is an indication, and playing through in one go can make the very heavy dialogue sequences start to grate. These can be skipped, but you then run the risk of losing some vital information on the following case.

Other than this, you’re going to be frustrated by the ending. The build up to the final reveal is excellent and keeps you wanting to continue, but in true LOST fashion, the ending will feel like a huge cop out. Regardless of the sucker punch ending though, Dual Destinies is a lot of fun, and if you have a 3DS collecting dust and some cash to spare, you’ll have a hard time regretting a purchase of the best lawyer themed adventure game you’ll ever play.

A boring subject made spectacularly fun, Phoenix Wright's main draw is it's characters and being able to make you feel like a bad-ass for being a lawyer. Dialogue heavy sequences mean you'll want to take a few breaks between play. 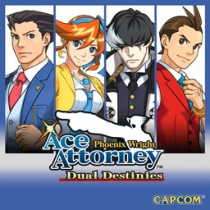