Pinstripe is a short but stirring puzzle-platformer about Ted, a disgraced Priest’s search for his kidnapped daughter in Hell. Created over a five-year period by Thomas Brush, it’s a testament to the phrase “video games are art”, and although it won’t be the best game you’ll play all year, it will definitely be one of the most memorable.

First of all, the game has a beautiful visual style. Its vision of Hell as a frozen wasteland is stylishly realised, with stunning hand drawn environments that are surreal and disturbing. Character models are richly detailed, featuring a level of detail not even achieved by some AAA titles. What’s more, almost everything in the game is a visual metaphor, ultimately serving the story and the themes it explores. This attention to detail really brings the game world to life and draws you into Ted’s journey. 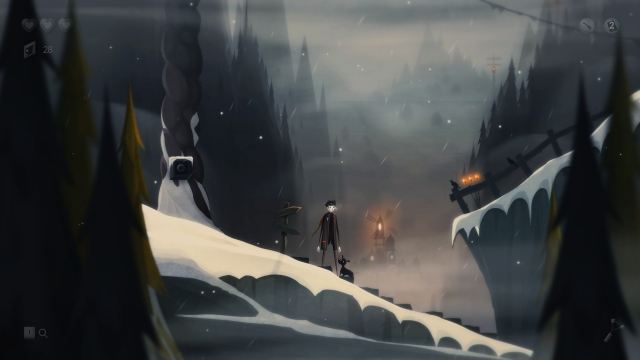 It’s hard to discuss Pinstripe’s story without spoilers, but what I will say is be prepared to feel some heavy feels. Its premise is fairly dark to begin with, and things only get more twisted, heart breaking, and disturbing as it continues. It’s a fine example of psychological horror, using a troubled character and their demons as the main source of fear. As a result, the game will genuinely have you feeling very uneasy at times, even without any gross or horrific imagery.

However, this finely crafted horror is frequently undermined by weird tonal shifts that can only be described as sincere but ultimately misjudged. One moment you’re solving a puzzle using clues found in the desperate message your daughter has left for you, the next you’re listening to a character talk with a funny voice or having your canine companion complain something smells like poop. Likewise, the music can change in an instant from dreary, haunting piano loops to cheesy adventure game Calypso music. The intention behind these shifts is clear: Lighten the mood and stop the game from being endlessly dark, twisted, and depressing. The thing is, the “funny” parts of the game aren’t funny, and when Pinstripe is at its best is precisely when it has you feeling like the only way out is to spiral further down into the madness. 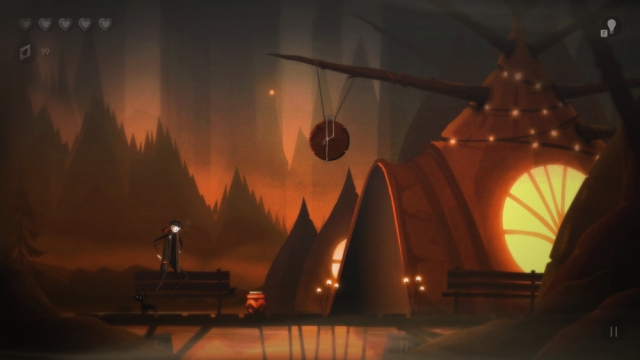 Gameplay also ultimately undermines the thematically rich story and uneasy atmosphere. Mechanically the game is sound, with tight controls and absolutely no bugs to speak of. But too often the narrative’s forward momentum comes to a grinding halt because Pinstripe decides it wants to be more like a “game.” Just when you desperately want to find out what happens next, you’ll need to backtrack to previously explored areas using newly acquired inventory items to collect more in-game currency (which you need to progress the story) that couldn’t be accessed previously. Or you’ll be forced to complete superfluous and mostly unfun mini-games (like a horrible Flappy Bird style lock-picking sequence). Or engage in overly long platforming sequences. The puzzles on the other hand often directly reflect what is happening in the story (or at the very least help to express the tone of the game), and so solving them is much less tedious. In many ways, Pinstripe would have benefited from stripping itself down to basics and not worrying about whether it had enough “game” features in it.

Despite its flaws, Pinstripe is still an engrossing and entertaining experience. The frustration you’ll feel at some of the gameplay will pale in comparison to the gamut of emotions the game will elicit during its story-driven moments. Moreover, it’s an impressive feat for a single developer. The sheer fact that one person was responsible for the game’s art, story, score, and gameplay deserves commendation. It’s well worth your time for a short-but-sharp feels hit.

Despite some design missteps, Pinstripe is worth your time if you're a fan of games that bring the feels