Back in 1999 the brains behind Baldur's Gate kicked it up a notch and released Planescape: Torment, and that Christmas my family lost contact with the 25-year-old me for months. No longer was I the resident of the Peak District in dear old Blighty. I was The Nameless One, a denizen of the city of Sigil. Accompanied by the floating skull Mort, Tiefling Annah-of-the-Shadows, Githzerai Dak'kon, and a bunch more including a succubus who is only interested in seducing immortals all voiced by some of the finest talents to ever stand before a microphone. Namely Rob Paulsen, Jennifer Hale, Sheena Easton, Mitch Pileggi and Dan Castellaneta. So yes, that's Pinky, Fox Mulder's boss, Femshep, and Bellshill's finest export as voices. 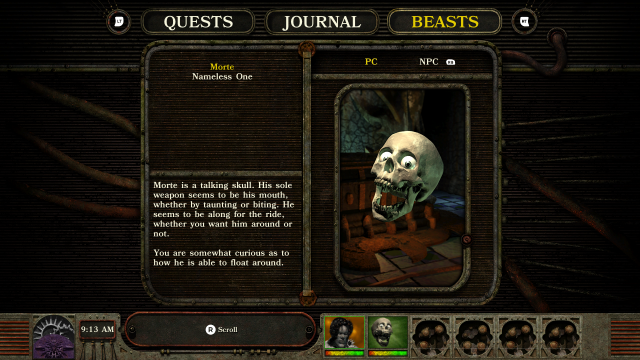 This enhanced edition of the game is, in essence, the same game as was released in '99 but with some of the dropped content from the original release put back in (thanks to the help of original designer Chris Avellone). There are also some tweaks to fix the notorious memory leaks and support platforms other than Windows. Not to mention running at resolutions higher than 800x600.

Like other Infinity Engine games, you are wandering around an Isometric world and in the case of Planescape: Torment, you're in the Advanced Dungeons and Dragons 2nd Edition setting of the Planes. A setting that has its own madness with which you must contend. The Planescape is beset with doors, you see, and they aren't all the wooden or metal kind with hinges. In fact, pretty early on you find a poor woman who has been through so many of the blessed things she's terrified to move. Doors in this context can be a pair of trees, a bush, anything you can walk through or between can dump you in another world if you're not careful. 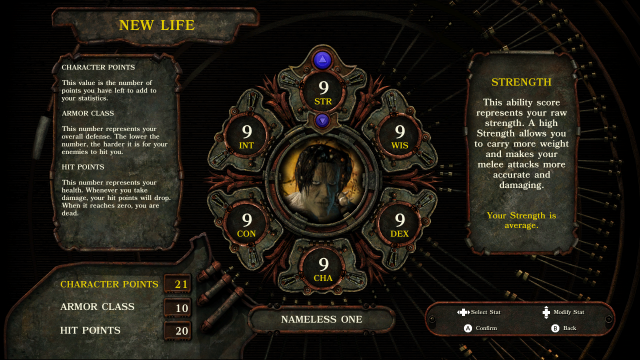 Add to this that your erstwhile self "The Nameless One" is an immortal who forgets everything when he dies, you can see why he decided that tattooing instructions on how to find his lost diary on himself seemed a good idea. It was, or would have been if it hadn't all gone Pete Tong and ended up with him in a big building full of furnaces, zombies, and people in robes known as Dustmen.

From here it’s off to find a man called Pharod who knows more about it all than you do right now, you encounter the ghost of your lost love, Pharod's daughter (Anna), and set off to find a witch by the name of Ravel Puzzlewell who is imprisoned in a maze by a rather vicious semi-divine entity known as "the Lady of Pain". Are you getting the idea that Planescape: Torment is more Hellraiser than My Little Pony? Good, it's exactly that... but more so.

While you wander the planes following the fate of the Nameless One, you will encounter intelligent machines, demons, lunatics, blacksmiths, and necrophiliacs (the aforementioned Mort). You’ll also explore the meaning of identity, whether a man’s past can taint his future, and find out if Mort ever does get his metaphorical rocks off.

Basic gameplay is simple enough, you’re exploring the world, completing quests and such with the thumb sticks being used to steer either your cursor, party, or individual characters about. 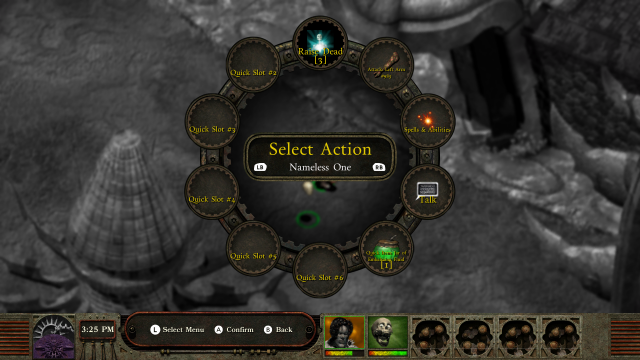 Combat is a simple enough deal: you can pause the game mid-fight should you need to fire off a heal or use a charm to fix someone's wounds, and even if you go splat in epic style, you're immortal so it's just an inconvenience, and you'll wake up again nearby with a red face and a lesson learned.

Anyone playing this game had better like reading too, as along with other games of similar vintage you're going to be reading conversations and choosing options a lot. Pay attention to what you choose too as it has effects on your alignment which in turn can change which quests and companions you can get. Pick the wrong option in a dialogue and you'll miss out on Dak'kon for example.

It should be pointed out that the control system in Planescape: Torment is AWFUL on a controller. What worked fine on mouse and keyboard hasn't translated too well to console and you'll end up wanting to chuck the controller at something on fairly frequent occasions. That said, it's worth persisting with the game because it's a stonker.

Planescape: Torment is a lesson in storytelling, with a plotline that lifts you to highs and dumps you into lows at a turn and all the while asking you questions about morality and making you think about your choices in the game and their consequences. Not one of the questions it asks are easy, but then nor are the answers you have to choose.

Go on, buy it. It's a wild ride as an immortal with amnesia, even if you don't need polaroids and no one gets shot in the head.

The greatest CRPG of the Windows era with some updates and controls from HELL. Buy it.