At the time of writing, pubs across most of the UK are closed. This is very sad but of course necessary because of events we are all trying to forget about. I’m not a huge drinker personally so I’m not really missing that, but I do miss a good game of pool. For the benefit of our US readers: pool is pretty much accepted as a pub game here and pool halls are relatively uncommon. In order to scratch that itch, I picked up Pure Pool for the Nintendo Switch.

Much like its Steam counterpart, Pure Pool gives you various different pool rules to play with, as well as snooker. There are also a number of challenge modes, which ask you to do things like pot as many balls as you can in a row or clear the table as quickly as possible. These are nice little diversions, but at the heart of it, this is a simulator of the two table sports we know and love. 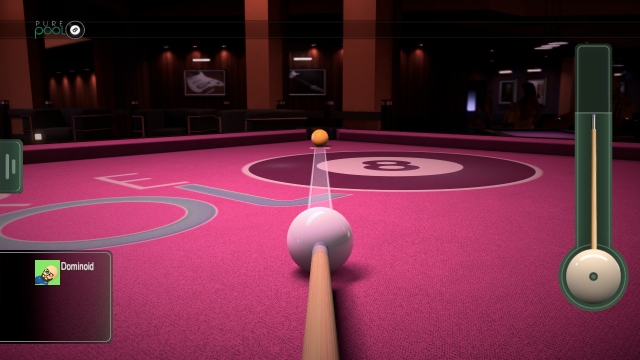 The rules are accurately represented although I couldn’t find anywhere that fully explains them in the game so I found myself having to look up some of the American variants of pool online. That’s OK though: this game only released on Steam six years ago, so it’s not like the developer has had very long to add in any rules. The assumption is presumably that you will know the rules if you’re picking up a pool game so I’ll let them off.

There are other things I’m less prepared to overlook though. The physics are reasonable but I find that balls move in a way that is a touch on the “heavy” side sometimes. This is especially noticeable in the snooker mode, where precision is often key to a good break. The controls don’t help here either, with the main control method being to pull back on the right analogue stick and then push it forward. Because there’s only a limited amount of travel in the stick, it’s almost impossible to gauge the strength of your shot, and if you try to strike gently, you usually just end up not pushing the cue all the way forward and either fouling the shot or failing to make contact at all. If you’re playing in handheld mode, there is the option of using a touch-controlled strength meter, and this is far better, but if you’re in docked mode then you’re stuck with the rather shoddy system that’s included. 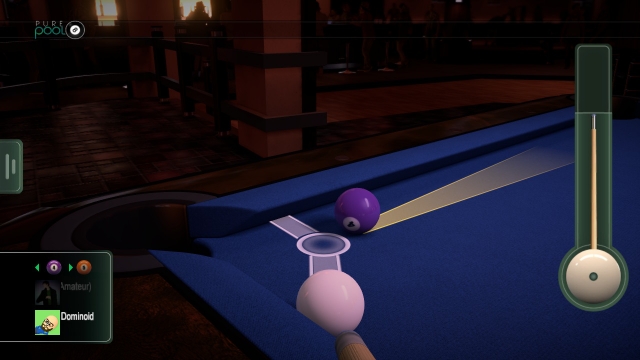 The music is rather grating to me and sounds like it would be more at home over a test card or Pages from Ceefax circa 1997. It’s sort of a light funk/jazz type affair and whilst it’s rather non-offensive, it’s also a touch repetitive and I just turned it off. Other than that, it’s just the standard noise of bouncing balls and clunking cues.

The graphics are very high quality with some nice lighting effects on the balls and tables neatly rendered. There’s no sign that this is baize though and you don’t see chalk dust or finger marks on the table crop up like you do in other games of this ilk such as Snooker 21. There’s also only a certain amount of camera manipulation possible. You can move around the table and scope out your shot, but when taking the shot, it’s always first-person as if you were actually playing in the flesh. This is fine from a realism perspective, but it would have been nice to be able to line up shots from a birds-eye view. There seems to be quite a spike in the AI difficulty as you progress, with the higher levels being very difficult to beat. This gives you a strong challenge, but it’s a very steep learning curve as a result. There is also an online mode but I struggled to find games quite a bit sadly.

If the controls were improved then this would likely be a relatively high-scoring title, but ultimately it doesn’t matter how good a game is if it’s not possible to actually play it properly. If you’re happy to play in handheld mode only (or you’re a Switch Lite owner) then Pure Pool is worth checking out, but if you want to play with any kind of controller then it’s just an exercise in frustration. As a budget title, this is a very pretty pool game and the addition of a snooker mode helps as well. But annoying music, iffy controls and an uneven difficulty curve make it difficult to wholeheartedly recommend.