Being a hero is so last decade. Epic quests to defeat the big, bad villain and save innocent lives? Boooring! It's time for the bad guy to get their own adventure, one full of chaos and treachery instead of goodness and courage. That's what LiveSpark Entertainment's Rack N Ruin promises to deliver: a top-down action adventure which turns the typical tropes of fantasy titles like The Legend of Zelda on their head. While it may not bring the same level of polish as Nintendo's iconic series, it still manages to hit many of the same notes—albeit with an evil twist.

A villainous adventure needs an appropriately villainous protagonist, and Rack N Ruin brings the goods in the form of Rack. This little demon creature is perhaps a little too powerful for his own good, having been put on his "last chance" after destroying (rather than enslaving) one too many planets during his servitude under the dark lord. After being sent down to one last planet, he's given clear orders to "enslave, not destroy" the place. What does he do? He gets to work destroying, naturally. Well, that's not strictly true. Gameplay-wise, there's very little destruction or innocent-killing to be done here. As Rack explores the game's overworld map, he'll navigate by solving puzzles, not smashing through obstacles like his personality would suggest. He doesn't outright murder innocents: he'd rather wander through villages, insulting the townsfolk and laying waste to their furniture. In fact, outside of boss fights, Rack doesn't fight any sentient beings at all, which is how the character can remain likable despite actively working towards the destruction of life as we know it. Yes, it's all very evil and apocalyptic, but Rack N Ruin is a comedy at heart, not a tragedy.

That's not to say that Rack is a pacifist. Most of Rack N Ruin's—admittedly short—four to five-hour length is spent in the thick of combat. Whether exploring the hard-to-navigate overworld, picking through maze-like dungeons or using your elemental weapons to solve (usually switch-based) puzzles, there'll almost always be enemies closing in from the edges of the screen. The enemies themselves do offer a good amount of variety in both design and behaviour, but their sheer relentlessness means that they're simply more of a nuisance than a challenge. 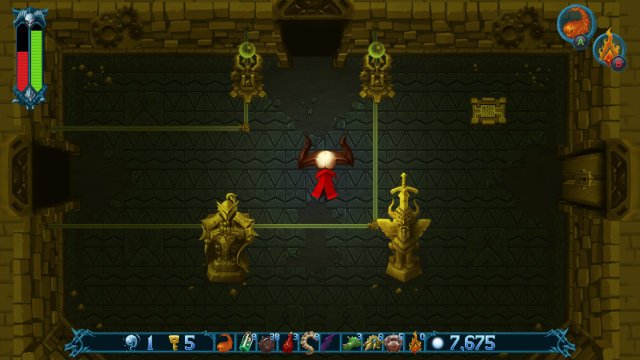 Heavily inspired by twin-stick shooters, the core fighting mechanics centre around four elemental weapons: firebolts, a demonic blade, icy shards and lightning bolts. Each behaves differently, has its own purpose in combat and also serves a function during the game's numerous puzzles. There's also a shield, powered by Rack's mana meter, which can be used to absorb enemy attacks without taking damage. These tools provide Rack a perfect amount of choice when it comes to approaching combat. Each one gets its time to shine, and none of them feel redundant.

It's a shame, then, that the adventure eventually gets bogged down by a growing—and frankly overwhelming—number of items, tools and magic spells. It sounds backwards, I know, but there is such a thing as too much choice; Rack N Ruin demonstrates that perfectly. There are turrets, spell tomes, temporary power-ups, consumables and more. It's just too much. Some items I never even figured out a use for, while other mission-critical ones found themselves lost amidst a sea of inventory clutter. If there had been fewer item types to sort through in any given situation, it would have made exploring the inventory less of a daunting task. As it is, much of the game's depth is locked behind a bloated inventory which is a slog to delve into. 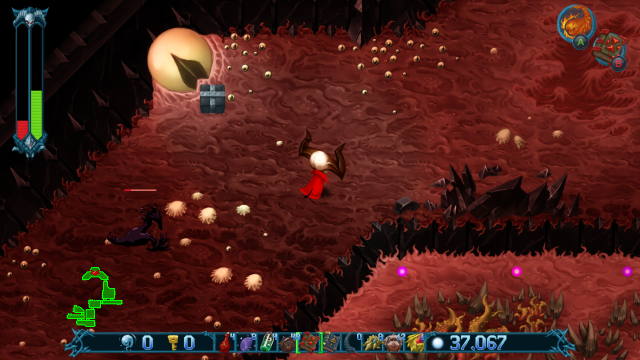 While you won't find Rack dishing out torture by his own hand, he will slowly corrupt the game's overworld by activating fast travel points, contextualised as demonic 'lightning rods'. This adds a visual indicator of progress, with Rack watching the idyllic world map gradually becoming a nightmarish hellscape as the game progresses. And it'll certainly be easy to spot all those visual changes because, with all the secrets hidden around the world, the game incentivises watching—bomb at the ready—for every little crack in the wall and hidden path. Those with a keen eye are rewarded with items, currency and consumables galore. Spotting secrets isn't the only benefit of being an observant player: it's also crucial for navigation. Getting lost in the game world is all-too easy, and the world map offers very little in the way of assistance. Still, the world is hardly gargantuan; while it might cause some annoyance, it shouldn't ever leave a player hopelessly lost. 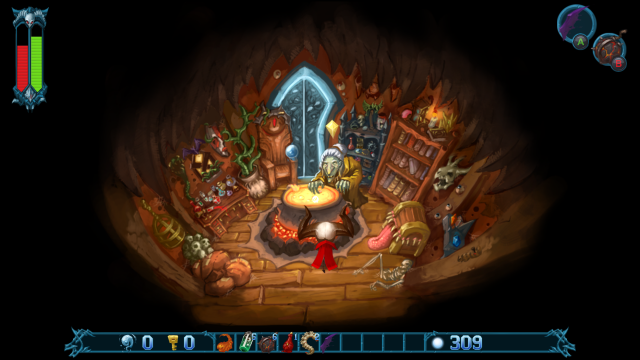 Rack N Ruin might suffer from an abundance of items and enemies, but there's enough worth experiencing in the game's humour, combat and distinct visual design to make it worth a playthrough. If you can stomach getting lost a handful of times, Rack N Ruin will serve you up a tongue-in-cheek Legend of Zelda-esque adventure with a villainous twist.

Rack N Ruin might suffer from an abundance of items and enemies, but there's enough worth experiencing in the game's humour, combat and distinct visual design to make it worth a playthrough.