Rain on Your Parade Review

Rain On Your Parade by Unbound Creation is possibly one of the cutest games I have ever played. Your Grampa tells you the story of a cloud that he knows that has the dream of finding a place where clouds are allowed to roam free and rain on anything they want whenever they want. Grampa uses super cute cardboard cutouts on a diorama with grass made out of green paper towels to make the story more visual and exciting. So Cloudy grabs his little red bindle and sets out on an adventure. His first stop is the legendary and mythical Seattle. 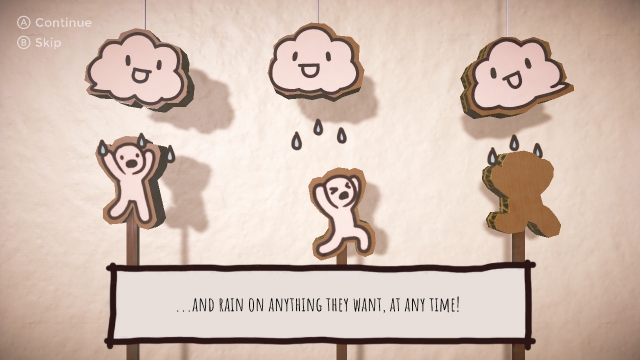 Cloudy isn’t just a normal cloud. He is a super cute and innocent looking cloud who is quite mischievous and has a little evil streak when you see how much enjoyment he gets out of ruining someone’s day. The sinister look of pure enjoyment on Cloudy’s face is so cute and quite unsettling at the same time. Your first mission as a rain cloud is to disrupt a wedding, with the goal of soaking the bride, groom and any other “hoomans” in attendance. Normally I would feel bad ruining someone’s big wedding day, but the reactions and high pitched screams from the people fleeing make the guilt instantly melt away. 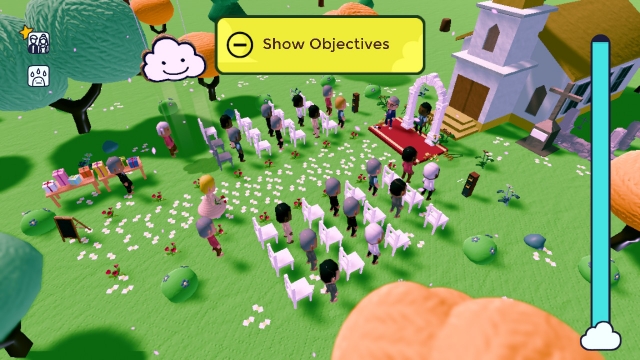 For each location you are given a list of objectives. The ones listed with a star are required to complete the level. The ones that don’t have a star do not need to be completed unless you want to unlock a special item to customise your cloud. If you fail any of the objectives you can always retry and try to complete the listed objective. When you successfully ruin the wedding level Cloudy “finds” a fancy top hat to wear. Extinguish the dumpster fire and Cloudy gets a fire fighter's helmet. Once you complete the game a New + mode is unlocked and new special objectives will be added to the list. 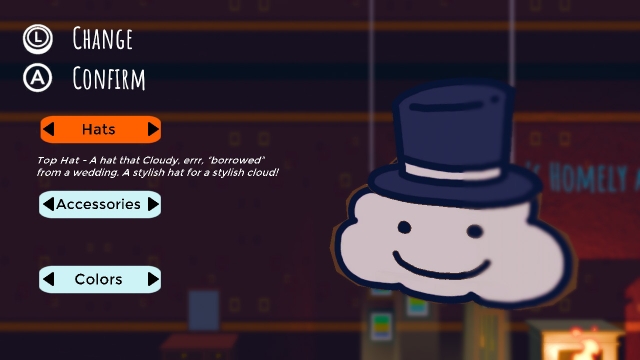 To put on the hats and accessories you earn you will have to talk to Papa Cloud and he will tell you all about the Cloud House. Whenever you want to switch up your style and try out a different hat, or even a whole different colour for Cloudy head here. They even let you draw your own expression for Cloudy. If you do decide to make a custom face Cloudy’s expression will not change during the level, it will be stuck on the one you created. I like how Cloudy’s face would change depending on what he was doing, so I just left it on the default Cloudy expression. 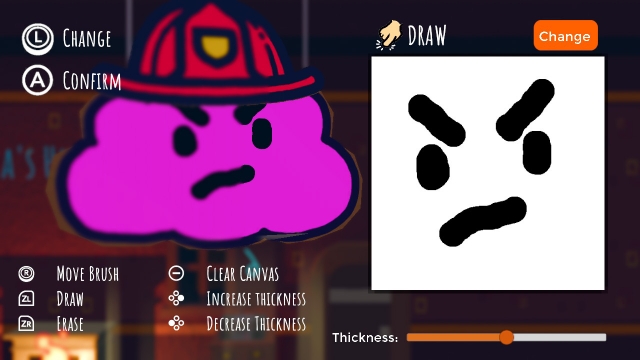 Each of the levels has a list of different objectives that aren’t just raining on people, some have you snowing to make ice, sucking up animals with a tornado, and shocking people and other objects with lightning. The main obstacle for Cloudy is running out of liquid, whether it be water, oil or acid for acid rain. Some levels will let you replenish your supply by hovering over a water source to refill. One level takes place in a park and has a frog appropriately named Froggie who is begging you to plant a garden to make the trees grow again because the selfish “hoomans” cut them down. The really neat part is the frog claims that he is from a hit videogame from the ‘90s and that he has to run through traffic without getting run over. He shows up a few times throughout the game to give you quests to complete. Cloudy can even get a frog accessory to sit on top of his head, it’s super cute and I just want to see it all the time! 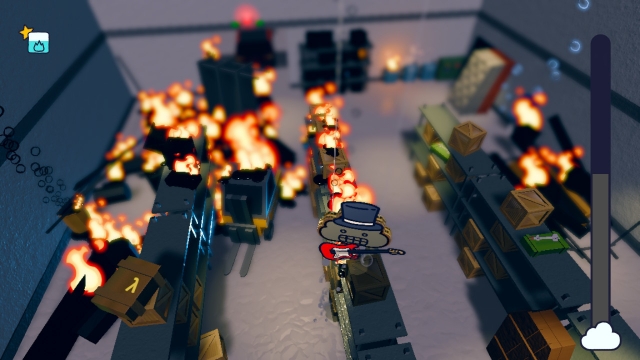 Besides Froggie, the game also features some really unique characters like an angry sun that chases you on the beach and Buggy the Bug. He was put in the game by the developers to inform you that if you discover any bugs in the game, be sure to report them to the game developers. Buggy is upset that he will only show up once in the game and that players won’t learn anything about him like his love of 13th century greek architecture or that he bakes a mean walnut babka. He feels it’s very unfair and that the developers are mean. 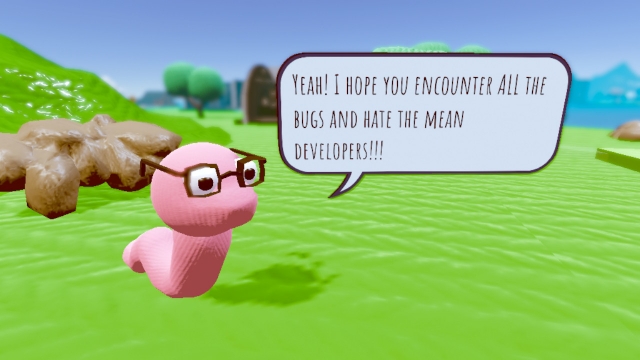 Rain On Your Parade has a great handmade feel to it with all the characters created from corrugated cardboard and Cloudy hangs on strings to make him float. The ground, particularly when it is grass is obviously textured like paper towel that has been dyed green. The music is great, and no matter what kind of level like the beach, graveyard, the forest, inspired by Legend of Zelda, or the mini game that feels like the original DOOM the music fits perfectly. 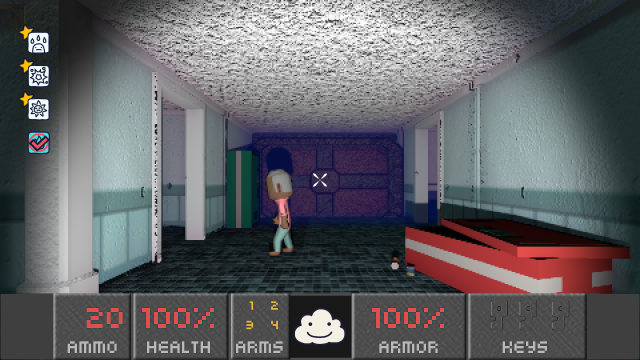 There are 50 levels in the main story of Rain On Your Parade. It probably won’t take you very long to beat, but if you are trying to complete every objective to unlock all the customisations it will definitely increase your play time especially in New Game + mode where the objectives are definitely harder to complete. It was so fun to see all the great references that the developers threw into the different levels. One of the levels is based on the Office TV show, another features Silent Hill, Plants vs. Zombies for the tower defense level and even being stealthy like in Metal Gear Solid and Counter Strike. 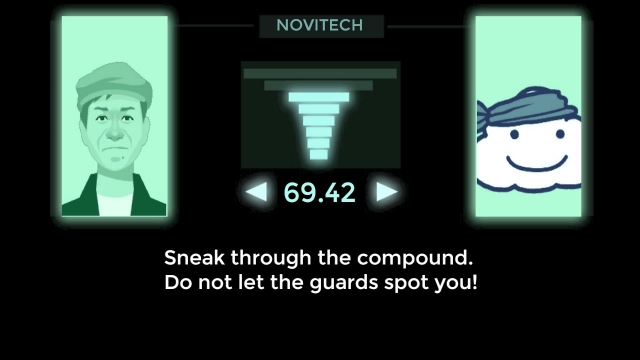 Rain On Your Parade is a ton of fun for any gamer no matter their age, the controls are simple so it only takes a minute to figure out how to control Cloudy. The huge variety and sheer number of levels will keep it fresh and never boring. I love that each level is pretty short so if you don’t have a ton of time to play you can still enjoy a quick level without having to commit a ton of time. Rain On Your Parade is a must play, even if it’s just to see the cute vengeful cloud and is available on Switch, Xbox One and PC. 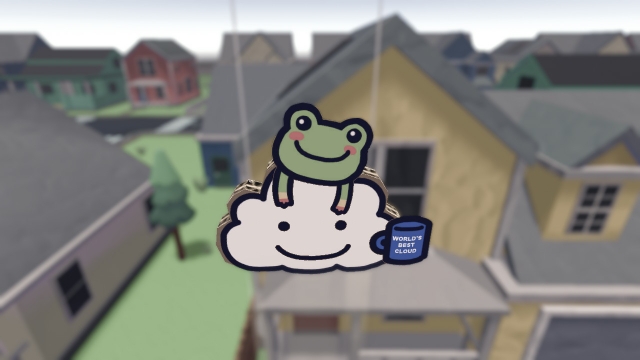 Rain on Your Parade (Reviewed on Nintendo Switch)

Rain On Your Parade is a super cute and fun game full of great references and amazingly cute characters. Who doesn’t want to see a cute vengeful cloud with a frog on his head?

Rain on Your Parade Review

Rain on Your Parade