A simple card game in which you play as a monarch while swiping left and right to choose either of the options presented to you. Each selection offers different results, whether it benefits the church, the people, the army, or your pockets.

Deceptively simple at first, however once one of the four powers reaches a certain high or low threshold, it's game over. This means that players are forced to keep a balance between benefitting all of the powers of the state to make sure that none of these rise too high or lose too much to make sure that they can rule for as long as possible.

The story is centred around all of the different kings present throughout the game; as each one dies, a brand-new ruler is elected. Each subsequent king that rules can advance the storyline for the player, with objectives presented which are meant to ease the player into advancing throughout the main premise of the game. 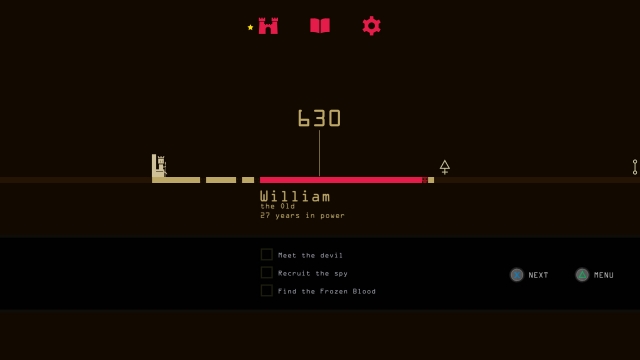 The idea behind ruling as a monarch has always been something I'm particularly fond of, which is one of the reasons I was intrigued by the prospect of Reigns. I don't have first-hand experience with being a ruler, but I felt that the game did a pretty decent job at the helplessness of each of the actions any monarch did that gave too much or too little influence to any of the many powers present throughout those times.

Each objective is displayed on the bottom right, indicating to the player what they have to do. These objectives can be very cryptic however, and don't give any concise answer as to how to achieve them. Not only does this make the game pretty RNG-heavy already, but surviving enough to make sure that you can reap the benefits of your rule (or get all of the achievements) can be an arduous task whenever forced to choose between two bad choices multiple times in a row.

The RNG system isn't infuriating to me, since one of the entire purposes of the game is to die and continue on as a different king, but it does make for a feeling of helplessness whenever you can't actually use logic to get out of a situation, and must watch as the bar slowly fills or depletes into what will be inevitable death.

Despite the strange story and difficult gameplay, the writing in the game is hilarious, with many things that happened that made me really wonder what the hell was going on; especially when one of the objectives I got was "talk to a vase". The writing is charming, given the funny and odd things that happen, especially whenever Junius Loosetongue appears and works as a wild card. I enjoyed the different death scenarios present in the game which made for quite the chuckle. 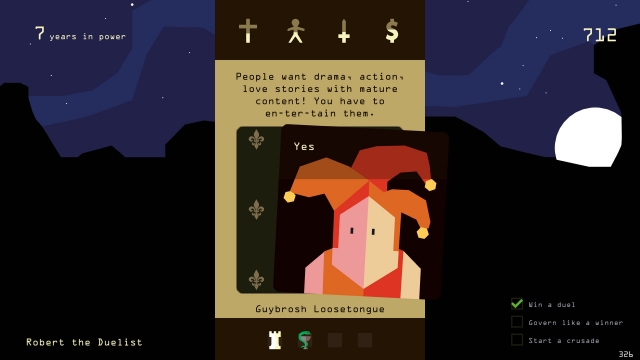 The gameplay can get repetitive, however, given that players will be tasked to just swiping right or left on scenarios that they have already dealt with time and time again, and after an hour or two it can start becoming a bit dull. That being said, as a quick game to jump in and out of for a quick session, it is very enjoyable, and eventually will lead to finishing the storyline.

Reigns is a great game, however, it's only so in short bursts. Funny and whimsical writing makes for enjoyable and befuddling scenarios I was fond of that got a chuckle out of me.