Roll7 knows a thing or two about making entertaining games that are easy to play yet hard to master (look no further than the likes of OlliOlli World and NOT A HERO), and they’re back once again with Rollerdrome, a high-octane arena-based combination of rollerblading and slick gunplay. Despite a surprising amount of skill required to beat the highest scores and a super satisfying risk/reward system, did Rollerdrome have enough to keep me entertained after the first few hours?

The year is 2030. A violent bloodsport known as Rollerdrome is watched across the globe, and you are its newest competitor: Kara Hassan. You’ll enter the tournament as Kara and discover the sinister intentions of the Matterhorn corporation, the company behind this visceral sporting event. The narrative is engaging enough to keep the game being more than simply going from level to level completing challenges, but it isn’t the main draw here, although the small bits of lore and items to inspect during the first-person segments set between rounds were enough to keep me invested. Rollerdrome has a rather retro-future look to it. I know that's an oxymoron but stick with me here — what I mean by that is if you take a look back at old science-fiction comic books or movies from the 1960s and 1970s you’ll get a similar vibe to what's on show here. It’s a great aesthetic — made even more eye-catching with its cartoon-esque visuals — the colour palette of dull browns, reds, and metallic greys really emphasise the feel of an older comic book.

The soundtrack is a wonderful array of pulse-pounding beats and high-tempo electronic music, which is absolutely not the sort of thing I would usually listen to, but Rollerdrome’s musical themes fit well here, and I actually found myself nodding along to a few of the tracks. Equally, the sound effects are great, with sounds such as the crack of sniper rifles firing, the subtle click of your weapons to let you know you’re in desperate need of more ammo, and so much more to please the audiophiles amongst you.

A quick aside regarding the features found on the PlayStation 5 version, the haptic feedback and adaptive triggers are simply wonderful in Rollerdrome and have been implemented perfectly. Popping off a grenade by squeezing a resistant trigger before landing a backflip with a sharp rumble of the controller always felt very satisfying. Likewise, the 3D audio is essential if you have a headset, with each pop of gunfire or near-miss explosion really immersing you into the world. The gameplay formula is actually very simple, but that doesn’t mean it isn’t incredibly fun. You skate around on your rollerblades, jumping off ramps and pulling tricks, flips, and spins just like all those years spent committing the Tony Hawk titles to muscle memory. Whilst earning a high score is a big part of the game, Rollerdrome isn’t just about doing a gnarly 900 spin, oh no! The main aim is to kill every other contestant in the arena, whilst always being on the move, performing tricks in combination with firing off your weapons to stylishly dispatch the swarms of enemies out to get you.

Performing tricks serves as a way to not only increase your score, but it’s how you replenish your ammo! This is a really unique mechanic that encourages players to keep on spinning and moving so as not to find themselves face-to-face with an enemy without a bullet in the chamber. You’re also able to grind on certain surfaces, which not only looks cool as you slide past an enemy, slowing down time with your focus aim and blasting them in the face (one of many times I was reminded of Jet Set Radio, but with less vandalism and more murder) but also serves as a simple way to keep your combo multiplier going. 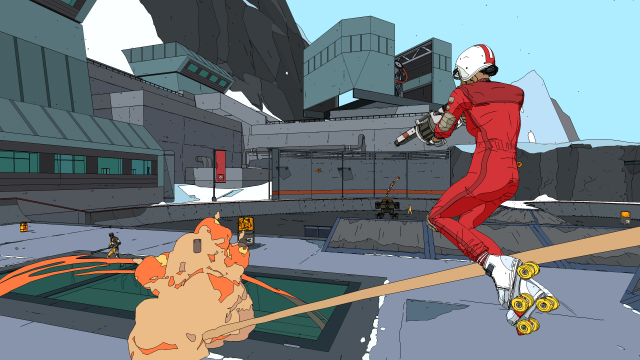 As you progress through each of the courses you’ll unlock new weapons, such as a shotgun, allowing you to return to previous levels with everything you’ve unlocked through progression to go after those trickier goals. Yes, just like the Tony Hawk Pro Skater series, each level has a list of optional challenges available — such as taking out a certain enemy before it can raise its shields or performing a specific trick whilst grabbing a score multiplier — and it was fun to revisit earlier levels with my well-equipped character to tackle the tasks that I previously struggled with.

The difficulty ramps up quickly; whilst I beat the first two levels with no restarts, by the third, I was really being challenged. You’ll be constantly on the move so learning the lay of the land for each stage is essential. Most levels can be finished (not including completing all the challenges) in around 5–10 minutes, so restarting isn’t too frustrating and is more a case of “Just one more go” until you finally take down that final goon. A few fiddly controls for movement aside, each failure was down to my own mistakes or lack of risk-taking. And taking risks is something you’ll need to constantly do to achieve the highest amount of points as well as restore your health, as dead enemies leave health kits scattered around where they died.

Rollerdrome is a complete tonal shift from previous Roll7 games; you’ll find no light-hearted quips or funky colours here. However, it’s a fantastic new direction for the developer, who have once again shown that they are masters of creating videogames that are much deeper than they first appear. To answer the question I asked at the beginning of this review, yes; Rollerdrome definitely held my attention long after the credits rolled.

Fast-paced, challenging, and visually pleasing, Rollerdrome is a game that deserves all the praise heaped upon it. Strap on your skates and load up those pistols, it’s time to dive into this brilliant skater-shooter!

Bought a PS5 and won't stop talking about it