But it’s 2020, and Deep Silver have decided to give it a fresh coat of paint with Saints Row The Third Remastered. It’s actually been done by Sperasoft, a developer well known for porting console versions of games and generally helping other developers in...developing. Volition, the creators of the franchise, have developing credit, but they’re busy with Saints Row 5 (what I’m hoping is called Saints Row 5th), so I assume they are credited because they made the original version.

For those coming in cold, Saints Row is a series of what can be called GTA-clones, which follows the adventures of the street gang from Stilwater, the 3rd Street Saints. Run around with guns killing people and stealing cars. By this point in their career, the opening text crawl explains, the Saints are an international brand with movies, TV shows and energy drinks. Until they anger the wrong people, and are left without a dime in the city of Steelport. 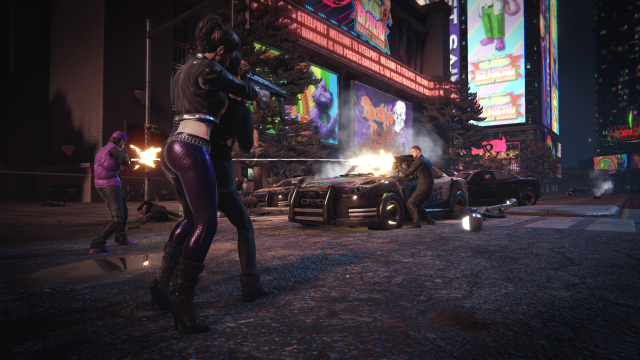 I think it’s worth pointing out that nowhere has anyone said that this is more than a prettied up complete edition. It has all of the various DLC available in the Full Package edition, minus the Steam-specific Team Fortress 2 heads. That means any issues you may have had with the original are probably still in here somewhere.

My main issue with The Third Remastered is that it is very dark. With gamma turned up to 100 I can still barely make out the gun in the background, and definitely miss out on the new model details in some areas. This is also an issue with the original game, and it makes it difficult to play during the game’s night cycle - and so much of the game takes place at night, it seems. The developer is quite proud of having remade thousands of textures, buildings and people, and even the times of day, but we can’t appreciate them for half of each in-game day!

There are textures that just pop into existence - oftentimes during cutscenes - and some that are very obviously not enhanced. To say they made a big deal about enhancing the grass (which clips through pavement in places), they didn’t touch the plants in the Saints HQ, or some of the bus posters. 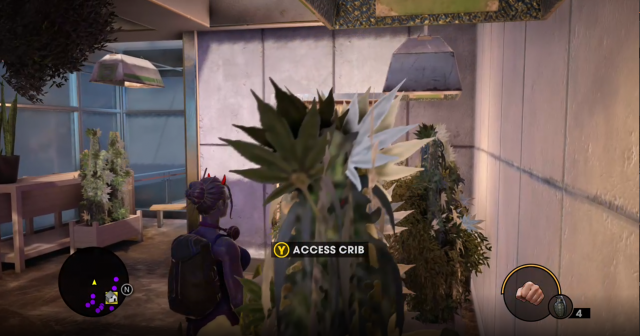 Further showing that nothing has been fixed, AI pathfinding is buggy, models glitch into the ground and enemies will sometimes stop shooting at you to turn around and almost forget you for a second. What’s more, they have increased loading times substantially. Despite having played the original many times, I went back to it whilst writing this review and I barely had time to look at my phone, let alone pick it up and check Twitter during loading. Guess what I do while this is loading?

So while making everything look gorgeous for the latest generation of consoles, and presumably the next ones too, it seems that Sperasoft didn’t actually improve the game. Whilst in a car talking to a homie, both characters will open their mouths. However, as with the original, whilst singing with Pierce they do not. Go near a gang safehouse, then go out of the red circle by accident? Well now you have to come back to do it later. 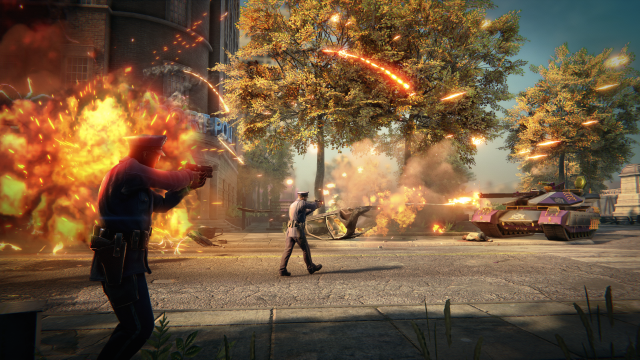 At least you can return with a tank

With Volition fixing up the PC version of Saints Row 2 (it’s a bit of a mess), albeit with the minimum of staff working on it (understandably), it would have been nice for Saints Row The Third Remastered being the definitive edition, rather than just the shiny one. Don’t get me wrong, this and the second game are both seen as the high points of the franchise by fans, and this is still a really good, very fun game.

The gunplay is solid, jumping through a car windshield to steal it is as fun as it’s always been. There are tons of customisation options, especially since this comes with all of the DLC. Want to run around with green skin, cat eyes with a monk’s haircut whilst wearing just a thong and sounding like a zombie? Or prefer to have a werewolf costume from head-to-toe? Maybe you want a full suit of metal armour! Sure, it won’t protect you any more than being completely nude would, but you’ll look so shiny! 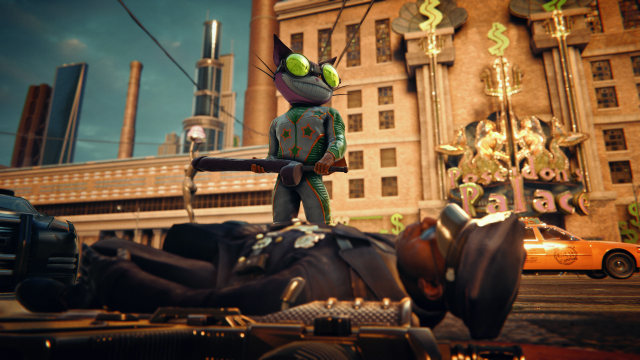 Two of the most threatening sights in Steelport

The story is enjoyable, and character interactions have some nice touches for fans of the previous games. If you want to race around an open city listening to the radio stations, you can do that instead. There are diversions and activities, such as assassination contracts, streaking and Professor Genki's Super Ethical Reality Climax, so there is plenty to do outside of the main missions.

Saints Row The Third Remastered is a great game, filled with humour and looking good on the current generation of hardware. It’s just unfortunate that it’s a lackluster remaster - it’s pretty as all heck, but I had no issue with the original’s graphics. If you’ve played the original game, or own the Full Package version, you won’t find anything new here. It’s still a great game, one of my favourites, inside its slightly glitchy, nice looking exterior.

Saints Row The Third Remastered (Reviewed on Xbox One)

Running around, shooting people, stealing cars and shoving grenades down throats. That’s what you want from a Saints Row game. Newcomers to the franchise will enjoy the heck out of it, but longtime fans won’t find anything new. Pretty, but not new.

Saints Row The Third Remastered Shows Off a Souped Up Steelport