Playing through Severed feels like a step back in time. Back to 2011 and the launch of the PlayStation Vita: punters were optimistic, touchscreen controls were still a novel idea and games were rife and plentiful, creating a potential breeding ground for success. While Drinkbox’s Severed manages to capitalise on the handheld’s quirks and novelties, it feels like it is perhaps too late to resurrect the likely departure of the Vita, resembling more of a humble swansong than a dose of 40,000 volts to the chest. 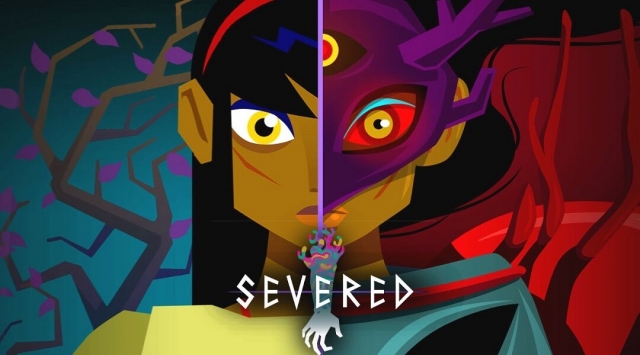 Severed is a hark back to dungeon crawlers of times gone by. You take the role of Sasha, a young girl who wakes up in the remains of her home in the midst of an apocalyptic catastrophe. Like her right arm, Sasha’s family are missing and with the help of a toothy demon and a two headed parrot-like bird you are tasked with exploring the surrounding area, searching for your loved ones who are within three different temples.  From the first person perspective you can move in one of four directions: forward, back, left and right, guided by the map in the top right of the screen and you explore the world; stumbling across enemies, puzzles and the inevitable dead end.

Beautifully presented, Severed is styled in the way that Drinkbox have become synonymous with. Bright colours compliment one another, creating an LSD trip of beauty, while managing to create a 3D like environment yet remaining strictly 2D. It’s not solely the art-style that echoes Guacamelee, but the tone and ethos of the entire game, too. If Drinkbox’s previous game was the world during the first days of death’s attempt at consuming the living world, than Severed is a fast forward into the future after its downfall. The world is bleak and terrifying. Houses are crumbled into nothing but a pile of rubble, dungeons have risen from the underworld acting as a hub of evil’s day-to-day routine and nothing roams the world but hideous monsters with limbs and appendages sprouting from all angles, trying to stop your every movement. With up to four enemies on the screen, potentially one occupying each field of view, you must slay your way through before continuing on your adventure, where Severed utilises the Vita’s touchscreen. Enemies are a myriad of unique, though similarly designed creatures, throwing their limbs and various forms of other attacks in your direction; to deflect you swipe against the incoming lunge, while to inflict damage, you must swipe in a single direction towards small gaps left in the defense of your attackers. And that is all the attacks really become, a series of swipes like an over enthusiastic Tinder user, trying to inflict as much nuisance in a small chunk of time. 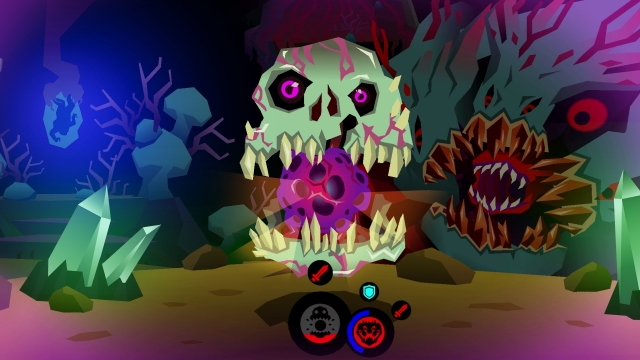 While encounters quickly become a repetitive formula, much like the re-hashed six or so similar character designs, there is a very large and sudden difficulty spike around three-hours into your playthrough. Suddenly, the usual attacking force of one or two ungodly beasts multiplies and the difference from one corridor to the next is staggering. From spamming relatively idle foes, you are now pivoting, looking in all four directions, timing your deflections against one foe, while lining up a series of quick flurries against several others. Highs of feeling like a samurai warrior are equated by the lows of cheap blows and unstoppable attacks. It all boils down to a final frustrating and dragged out boss battle where you realise you’ve not learned much more than how to move your finger at excessive speeds. A bit more variety in the melee combat department would have perhaps encouraged more thought to fights than just the constant swiping it eventually becomes becomes.

Severed does offer that chance to improve Sasha’s stats, though. As you inflict damage, a meter increases, once it is at maximum capacity and you finish off an enemy, you are given a timer and the chance to ‘sever’ the limbs of your opponent. Anything from arms, eyes and tails are available and all are required to upgrade, be it health, damage or magic buffs. Some of these upgrades are then required to solve puzzles or reach secret areas once the story has concluded. It does encourage replayability, and offers the chance to focus on one particular skill, but with a tough difficulty increase in game, you never truly feel powerful. Drinkbox’s latest title is far from a five minutes of fame indie title. Its exclusivity on the Sony handheld proves that there is enough going for it to warrant a limited platform release, utilising a quirky genre with solid controls. It’s the gameplay itself where Severed is restricted, the repetitive nature of combat and long cycles of retracing steps during puzzle solving act as a tourniquet upon its eye-popping colours and creative design. Fun to play and easy to master, if you’re a Vita owner Severed is a must, but only if to prove to yourself that the handheld was worth your money.

Severed is a story about love. A girl’s love of her family and Drinkbox’s love for Vita. Repetitive combat and a tough difficulty spike limit the enjoyment, but there’s no reason every Vita owner shouldn’t at least give it a go.