She Remembered Caterpillars is a strange game. One one hand, it is a quite logical, straightforward 2D puzzle. On the other, it tries to tell an emotional yet vague story through written, out of context snippets. The end result is a nice puzzle game with a shallow and half-hearted emotional core that ends up feeling disjointed and forced in.

The problem with that emotional backbone is that it ends up detracting from the overall experience. I’m far from implying puzzles are not a suitable medium for emotional narratives, because they oh so obviously are. The issue is that the emotional quest of a scientist to save her dying father carries all the emotional depth of prequel Anakin Skywalker when handled through small snippets of text in a game made of colourful little characters crossing genetic caterpillars. It feels out of place, and the She Remembered Caterpillars knows it -- it tries to force the lore together to present the most tenuous connection between the two elements that compose it, and the end result ends up feeling very much like a cute puzzle title where someone decided to simply shoehorn in grief and pain during post production. It’s almost distasteful. 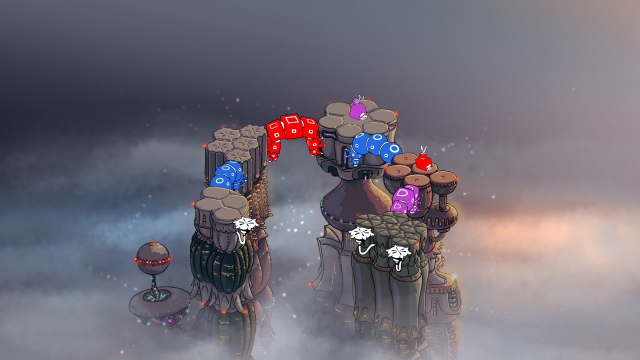 It doesn't ruin the game, but absolutely ruins any chances of it being outstanding.

The gameplay, however, is simple and elegant. It follows the age old formula of getting something from point A to point B and standing on buttons, but adding colour coding and mixing to make things complex. Characters and obstacles are colour-coded, meaning only certain colours can get through a bridge or obstacle; when secondary colours come into play, you must now mix the primary colour characters into one single organism, which both changes the flow of the level as well as your available options.

She Remembered Caterpillars’ lovingly cute sprites give life to the characters you control and the environments you traverse, presenting a very interesting art style that feels like an old-school cartoon. The animations are smooth and well done, and seem to skip a few frames at times, just like those old Cartoon Network shows.

The music, unfortunately, is absolutely forgettable. As the game’s store page mentions the score by Thomas Höhl quite prominently, I expected it to be at the very least noteworthy, but it’s minimalistic style might just as well not even be there. Sound effects fall in the same scale, being efficient, but average. 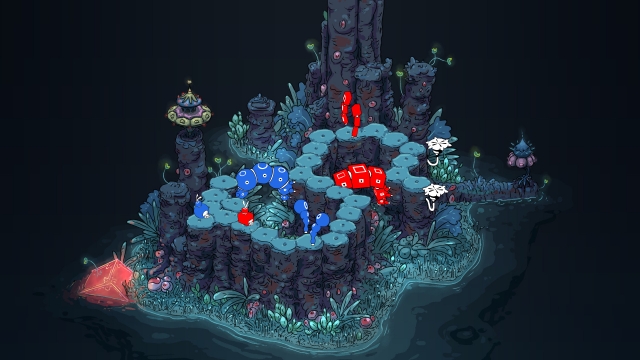 It looks weird, but trust me: it's cute. Like a llama.

The puzzle difficulty is spot on managing to progressively get harder while retaining the freedom to experiment. While you can still only complete the level in a certain way, you are able to stumble into the answer in a gamma of different approaches. The levels get noticeably harder, but they rarely become frustrating.

Overall, She Remembered Caterpillars is a good puzzle title with a very different artstyle. It’s self-described “fungipunk” aesthetic lends an elegant air to procedures, while its puzzles are usually satisfying with the right amount of complexity. It doesn’t reinvent the wheel, but it doesn’t need to; She Remembered Caterpillars does what it sets out to do, despite someone dumping their emotional grief into it instead of a therapist.

She Remembered Caterpillars (Reviewed on Windows)

She Remembered Caterpillars is a good puzzle game with the right amount of complexity and difficulty, but it is dragged down by it's undeserved grief and emotionally shallow overtones.

Looks really cool and unique this..I do like a good puzzle game!