The 3D platformer has made a resurgence lately, and the past 12 months have been a particularly great time for fans of the genre. Skylar & Plux: Adventure on Clover Island is another in the vein, but rather than being based on classics of the N64, it’s more like the PlayStation 2 title Jak & Daxter: The Precursor Legacy.

That’s not a bad thing though, as that game did a lot with what it had, and for a team of only five people Skylar & Plux is also quite an achievement. You control the eponymous Skylar as she escapes the clutches of the evil CRT, and crashes on Clover Island, meeting up with Plux. Neither of them are native to the moon, but with the help of ARM (Skylar’s recently acquired robotic arm) they quest together to save the Lo’a who have been captured by CRT. I’ll preface this by saying that Skylar & Plux is easy. Finishing the three areas of the main story took me about two hours, and I wasn’t even rushing since I received this in plenty of time to write a review. To 100% it’s more like five hours, as the only collectable are the Lo’a, who you have to save from cages. The developer Right Nice Games has been quite open about the length of the game, and I’ve played plenty of short games that I’ve enjoyed a great deal.

The locale of Clover Island looks great, and is kinda reminiscent of the original Crash Bandicoot in style. The main characters are bright and very well designed, so it's unfortunate that the Lo’a are so bland. Another design choice that kinda bugged me was the lava in CRT's stronghold being literally just a stretch of orange. There's no animation to it, except for the stuff that pours onto lower levels. 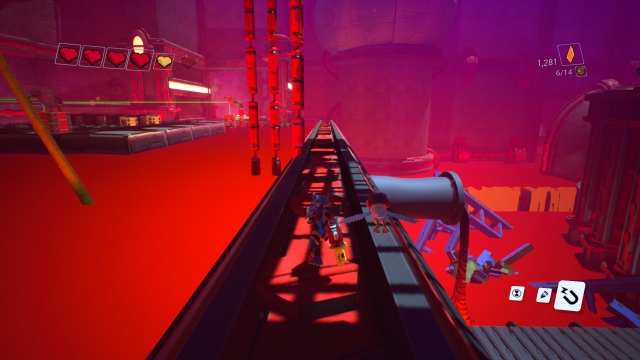 Clover Island is made up of the new Lo’a village, CRT’s stronghold (made on top of the old Lo’a village), Clover Mountain and Forlorn Desert. There are 51 Lo’a to rescue, and you need to collect 100 shards to unlock their cages. They are in plentiful supply, so even with most of the Lo’a rescued I still had about 2000 shards. 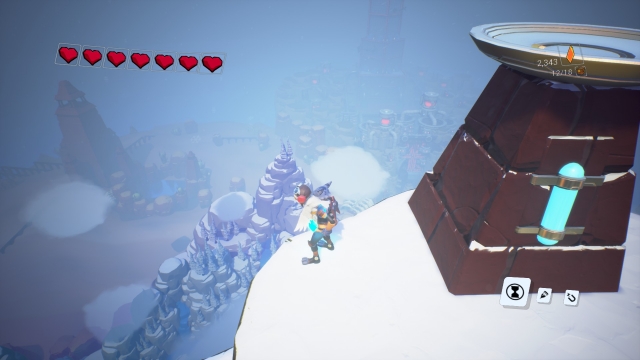 Now, just because it's a relatively easy game doesn't make it a bad thing. For instance, it's perfect for newcomers to the genre and kids who are looking to leave the safety of Mario games. Water means sudden death as much as lava (robotic arm, remember?), so there is plenty of platforming over precarious distances. You get some upgrades to help you along the way, though I felt slightly disappointed that none of them involved Plux.

Skylar gets outfitted with a jetpack, a time control orb and a magnet. That's not many things, but the ways that Right Nice have set out levels mean that you might use more than one in quick succession. The latter two also figure into combat -- you know, unless you want to get sent back to the closest checkpoint… 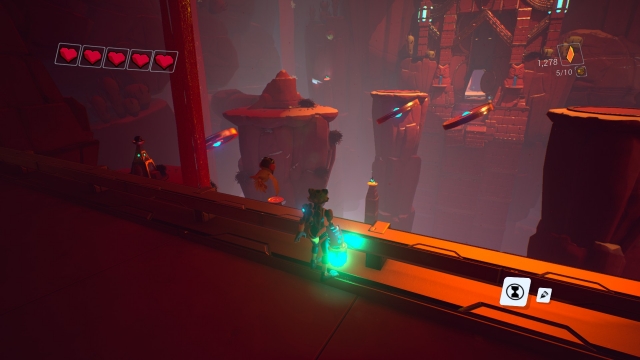 Combat in Skylar & Plux gets quite frenetic in the final level, and it was honestly quite a surprise. In the first two, you had a handful of enemies at once, which were easy enough to manage. You can punch and spin, and that’s all you need. Stopping time is used for platforming, and the magnet is used for puzzles -- until you start being swarmed by enemies. There aren’t many types, but they make up for it with sheer numbers…

The final thing I want to hit on is the script. I appreciate a funny script, and honestly I laughed at a number of the exchanges. Skylar is a silent protagonist, so all of the comedy comes from CRT and Plux chatting, whilst the evil overlord seeks to distract you from your goals. The plot is pure boilerplate, so it’s a good thing that the dialogue is so good.

There was only one major bug I found, but that was resolved by restarting the game. For some reason, the audio went weird if the camera wasn’t facing a certain direction. Other than that, there are a few framerate drops and object pop ups, but nothing unforgivable with being an indie game. 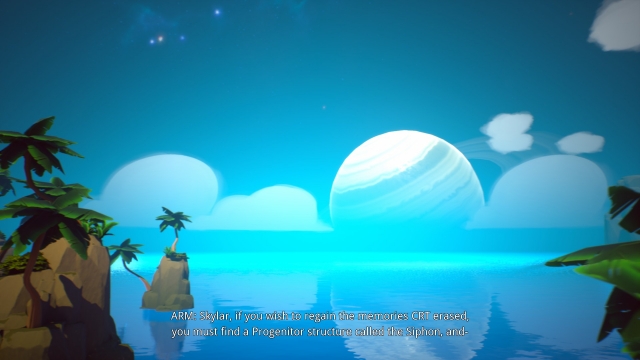 Did I mention Clover Island is on a moon?

I’ve mentioned Jak & Daxter a couple of times, and there’s more than parallels to be drawn there. Silent protagonist with a funny, smaller, sidekick? Precursor’s (Progenitors, but still) built ancient technology and died out? Practically useless village elder? Check, check and check. Well, so long as the sequel doesn’t have the same drastic tonal shift, it’s all good. At least, I hope they do a sequel, as I would quite enjoy a longer and more fleshed out Skylar & Plux.

Adventure on Clover Island is a good starting point, and shows that the team have the ability to make something great. Unfortunately, most gamers decide games on a price=hours basis, and that’s something Skylar & Plux doesn’t deliver. However, if you’re up for a strong platformer that has a great script to waste some time on, it’s a definite recommendation.

Adventure on Clover Island is a good starting point, and shows that the team have the ability to make something great. Unfortunately, most gamers decide games on a price=hours basis, and that’s something Skylar &amp; Plux doesn’t deliver. However, if you’re up for a strong platformer that has a great script to waste some time on, it’s a definite recommendation.

New Trailer Released for Skylar and Plux Ahead of March Launch