I reviewed Sorcery! Part 1 & 2 back in March, and I quite enjoyed it. Coming back to play Part 3 now, my interest in the story is waning. Sorcery! Part 3 despite being listed as its own game on Steam, it’s more of a ‘next chapter’ of the entire Sorcery! story, and I highly advise you pick up the other two as well.

For those who didn’t read my other review, inkle’s Sorcery! is a digital reinvention of Steve Jackson’s adventure books of the same name. The indie studio are best known for their game 80 Days, which had you deciding how to navigate the globe. This idea translates well into Sorcery!, where a lone adventurer must make his or her way across the realm to recover a stolen crown. 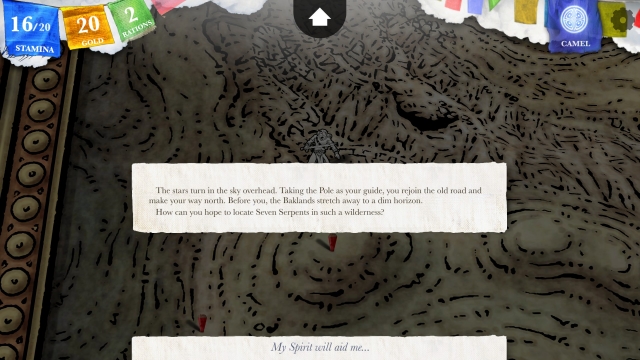 Picking up immediately from the conclusion of Part 2, Kharé: Cityport of Traps, our hero stands on the road into the Baklands. A once luscious region of forest and meadows, the Baklands you see today is now nothing but sand and rock. After no more than a few steps down the path are you attacked by a flock of Nighthawks, but before you can be torn into ribbons, you are rescued by a messenger from the King.

Your quest to reclaim the crown has been discovered, and the Seven Serpents—spies of the enemy—are making their way back to the evil Archmage’s Mampang Fortress. As you cross the rocky desert, you encounter these Seven Serpents who each have their own speciality that must be countered—the wizened Shadrack warns you that four of them are matched to the elements of Earth, Wind, Fire, and Water but that the other three are unknown. 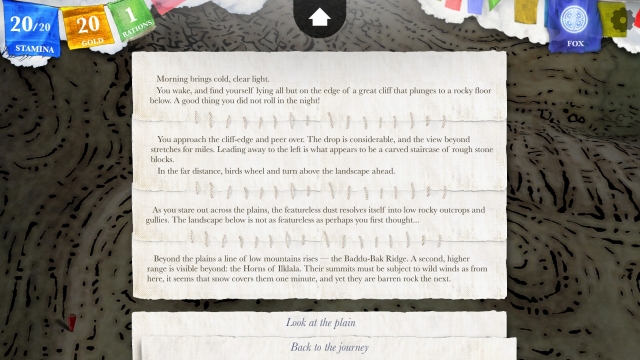 Sorcery! Part 3 plays in the same way as the previous entries, with the map laid out like a board game and having you move your playpiece down the cliffs and across the wasteland to points marking interactions. Part 3 is the most open of the parts, as the expanse offers you multiple routes and destinations. Where before you were only able to choose between two or three ways, there were often up to five here. With this, Part 3 offers the most replay value by the sheer number of routes and outcomes possible.

Combat is unchanged from before too. Your current health acts as your stamina which you gamble on each attack. Using a slider, you select how much effort you want to put behind a swing, and if the value is higher than the opponent’s then they take damage. Having a far higher value will do more damage, but leave you with less to work with later in the fight. If you leave it at zero then you will defend, only allowing the enemy to hit you for a single point despite the amount of stamina they use. Knowing how high to attack will most often be guesswork, but the text boxes that appear after each round will give hints to how the enemy will react next. It’s a nice system, but without much change over the other episodes, it has grown rather repetitive having played the other two. 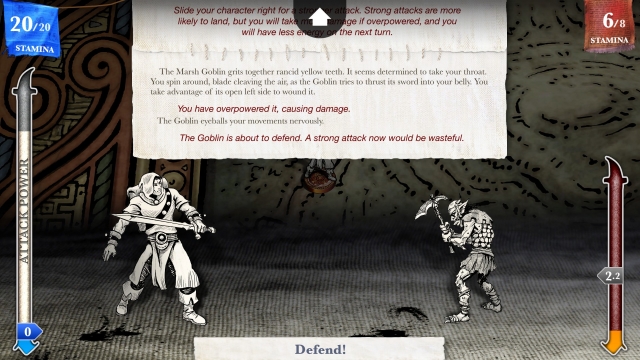 Your hero can also cast magic during conversations and while exploring. You carry a spellbook of three letter words, synonyms, and acronyms that allow you to produce a manner of offensive, defensive, and situational spells. In the story, magic is cast by connecting stars, with each star representing a letter. Gameplay-wise, a small draft of letters will appear on the screen, and by *spell*ing out the correct word, you can cast the corresponding spell—ZAP to cast lightning, DUD to create an illusion, or DOZ to slow an enemy.

Sorcery! Part 3 is more of the same, and I’m beginning to grow tired. The episodic format works well for stories that offer more dramatic or emotional moments, and having to wait months between each part has allowed other, better, roleplaying games to steal my interest. Unless inkle plan to expand on the story of Sorcery!, Part 4 shall be the last—here’s hoping it will be worth the wait.

Sorcery! Part 3 is more of the same, and I’m beginning to grow tired. The episodic format works well for stories that offer more dramatic or emotional moments, and having to wait months between each part has allowed other, better, roleplaying games to steal my interest.