I’ve been looking forward to Souldiers ever since I tried the demo that was available on Steam Next Fest. I adore Metroidvania-style games and 2D platformers with exploration and a few RPG-like elements; sign me up! The problem was, when I first started playing it, I hit a game-breaking bug; no matter how many times I retried playing it, when I got about 20 minutes in and when I received the map, the game totally froze up. I wasn’t the only person having issues, so developer Retro Forge announced an update that would deal with problems like this, along with other concerns people had. Update v1.1.1 is now here and I can’t wait to jump back in! Souldiers starts with a really cool animated intro that shows you some of the characters you will meet on your journey. This short movie got me super excited to try it out; if the dev team spent this much time creating this intro, chances are they took their time on the main game itself. As soon as you start a new game, you select how much of a challenge you want based on if you would rather explore, fight while exploring, or use everything available to you to survive (this is recommended for experienced soldiers). If you decide to go for the Explorer difficulty I can promise you that there will still be tons of puzzles to solve and enemies to battle to test you. 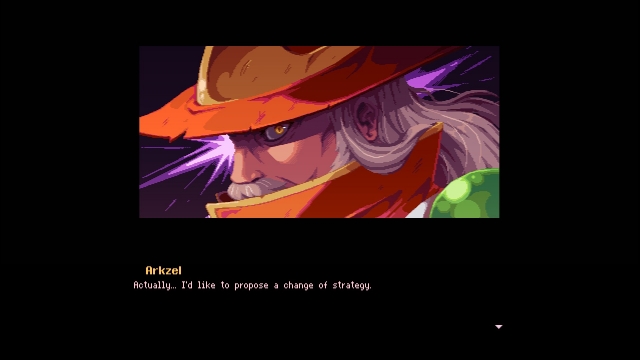 You play as a soldier in the nation of Zarga, one of the three that rule the continent of Ascii. The Royal Council is debating the best strategy to deal with the imminent war. After a few hours of discussion, the King has decided that they will follow the positioning set by General Brigard. The Council is set to leave when Arkzel (the King’s advisor and sorcerer) proposes a change of strategy; we already know that this can’t be good. The scene then switches to soldiers waiting in a grotto; originally General Brigard’s strategy had them fighting along with the others, but now he tells them to stand firm and wait. They are waiting for Dadelm’s army to come marching down the hill, but suddenly the ground starts shaking, the earthquake traps them between two mountains, and the world opens up beneath them, plunging them into darkness. Suddenly, a glowing beam appears in the dark: it is a Valkyrie who has come to take them to the next life. The soldiers are in disbelief as they are sure that they are still alive and will rejoin the rest of the army when they get out. She can see in the palm of her hand that their lifeline ended when they were trapped; there is something more powerful holding them back, the rocks aren’t the only thing keeping them there. They have the choice between following her or turning into dust while they remain stuck in the cave, so they decide to follow. Souldiers is not a narrative-heavy game, but the story that is here is very compelling and makes you want to solve the mystery of what happened to get these soldiers here and see what will become of them. At this point, you must choose your class from the available options of Scout, Archer, and Caster. Each class has its own unique stats: Scouts have the most health with four out of five stars but have the lowest mana at one, Archers have a health rating of three and attack of two but they have the benefit of having ranged attacks, and Caster has a two for health but a five for mana and have a magic projectile that hits enemies. I decided to go with the Caster class as I really liked the ability to have magic attacks that fire projectiles — like homing torpedoes — and big magic attacks that can cause major damage if your movements are timed well. As you level up, your character will learn new moves and spells depending on which class you selected and what power-ups you select on the stat tree to level up your soldier. 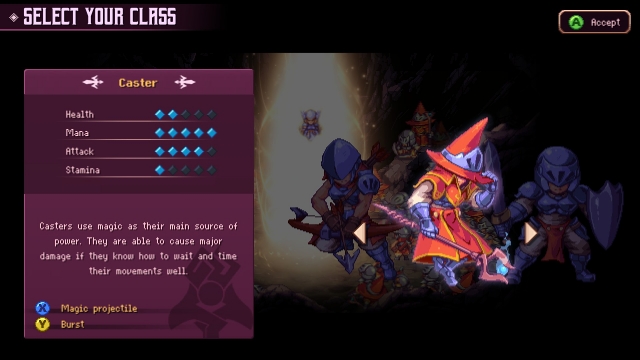 Souldiers is a beautiful-looking game — the graphics remind me of some of the best games on the SNES! The character animations are really fluid and look very smooth in this classic pixel art style. The platforming and combat work great; the controls are very responsive, and as you level up there are multiple skills that you can teach to your character. Souldiers isn’t only beautiful with great level designs, it sounds amazing too. The soundtrack reminds me of other great titles on the Super Nintendo like Final Fantasy VI, it’s so good it’s one I would want to listen to when I’m not playing the game! 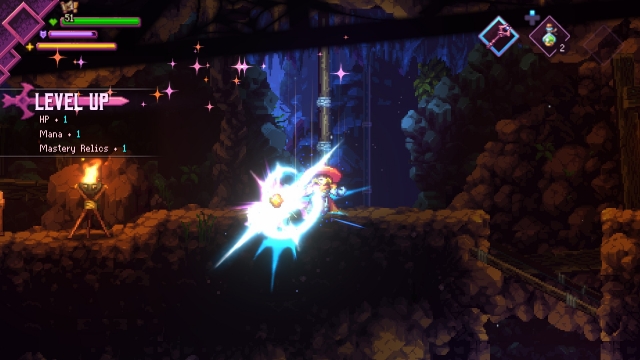 As you explore this new world, other soldiers that you know will give you advice and items to help you on your way. Two of the guys you come across were in charge of making a map of the Spider Cave, but when they discovered all the spiders hiding deep in the cave they were too scared to keep exploring to finish the map, so instead, they gave it to you to finish as you explore the rest of the cave. This is where the game froze for me when I first tried playing it, but now with the update, I didn’t have any issues at all and I was able to finish finding all the secrets hidden within this grotto. The puzzles that I came across were challenging but not impossible to solve— they definitely worked my brain! Once you enter a dungeon, you are trapped inside until you find the solution to get out, but once you do you can travel to the other dungeons you have been to before and new ones you have yet to explore. Each of these dungeons has treasures hidden in secret passages that make it worth spending the time to find them hidden in the walls. Some of the items will really help you on your journey through this new mysterious world and the obstacles holding you back. I am so glad that Retro Forge decided to put out this update and fix the issues that popped up because this is such a good title; it would have been a shame if people never got a chance to try it, or were turned off from the mixed reviews on the Steam page. I can assure anyone who was on the fence about picking up Souldiers because of those comments that, with the update, this is a title that is worthy of being added to your library. If you enjoy action-adventure Metroidvania games with great graphics and a kick-ass soundtrack this is one you need to try; someone needs to figure out what evil is holding the soldiers back from going back to their own world!

Souldiers is a must-play title for anyone who loves Metroidvania-style games with RPG and platforming elements thrown in. Despite a few hiccups at launch, v1.1.1 addresses all the issues, making this gorgeous-looking and -sounding game one you shouldn’t miss!