As we slowly burn through all the natural resources on Earth, it’s becoming more and more likely that at some point we’re going to need to take to the stars to find a new planet at some point. I’m not pessimistic enough to expect that to be in my lifetime, but I can’t imagine it’ll be too many more generations before science fiction games become training for real life. Space Crew gives you just a little bit of an idea as to what things will be like when a trip to Mercury becomes akin to hopping on the bus to Aldi for some milk and bread, and maybe a kayak from the middle aisle.

The premise of this title, a sequel to the popular Bomber Crew, is very simple. You are in charge of a spaceship and its crew, and you have to command your team of explorers to complete missions. There are six crew members on your ship: Captain, Navigator, Engineer, Comms officer and two weapons officers are the usual loadout but over time you can mix this up by giving additional skills to them. Each of them can perform at any station on the ship, but they will always do a better job at the station they specialise in. As well as commanding the main stations of the ship, they will also have to don space suits to hop outside the ship and repair engines, grab fire extinguishers to put out the far-too-frequent electrical fires that spark up on the ship, or pick up first aid kits to heal or revive other shipmates. 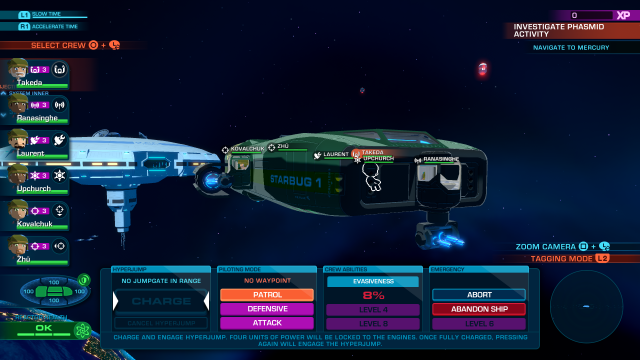 With cute chibi-style graphics and a nice chunky interface, I initially expected this to be Theme Hospital in space or something similar, but it’s actually a little bit less complex than that. Whilst there are elements of resource management, it’s essentially a cut-down space strategy title. Your ship can be upgraded, but only with a few additional things such as armour and beefier weapons. You can customise it with liveries and colour schemes which is quite a nice touch, but once I’d made it look a bit like one of the ships from my favourite TV show, that was enough for me. The overall layout of the inside of the ship doesn’t change. This isn’t a builder, it’s a strategy title, and the gameplay is all about the missions.

That is a bit of a shame to be honest as there is a very noticeable lack of variety from said missions. Most of the game’s missions take the form of “go to place x and kill aliens” or “go to place y and deliver supplies. Also, kill aliens”. There are a few cool boss battles and like along the way, but these are few and far between. Combat is largely automated anyway, with your input restricted to deciding if you want to move some of your non-combat specialist crew to combat stations or not. You can call in backup from afar and route power to shields or weapons in true Star Trek fashion, but it’s not an in-depth style system like you’d get in Endless Space or Master of Orion etc. 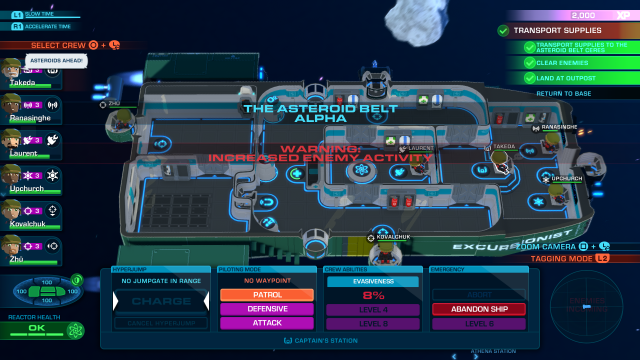 There’s very little in the way of a plot, so after a little while the core gameplay loop just feels grindy. You’re completing missions purely for the benefit of completing more missions. There wasn’t anything that grabbed me enough to want to keep playing. If things felt a bit more fluid then I might have been less frustrated, but the controls are far too fiddly. You can rarely see what’s going on outside your ship properly so you’ll be swinging the camera around a lot. Focusing on things outside of the ship requires “tagging”, and this applies to enemies you want to shoot or places you want to fly to. Despite there being clearly enough buttons on the controller, there isn't actually a button to tag things. Instead, you enter “tag mode”, which is also the only way to get a good look around your ship without things in the way, and when you’ve hovered over something for a few seconds it gets tagged. This works reasonably well for enemies, with approaching aliens getting marked for dispatch in just a few movements of the stick. For waypoints though, it’s not ideal. As it’s automatic, I found myself inadvertently changing the course of my ship mid-battle repeatedly. This meant that I was constantly turning around again after a skirmish because I’ve tagged an enemy too close to the place I’ve just come from and ended up doing a U-turn.

With better controls and a story mode, I think I’d have really liked Space Crew. There’s certainly a lot of charm to it and whilst I didn’t fall in love with it, I did enjoy it in short bursts. It’s not an epic space opera, and if you want in-depth strategy then this isn’t the game for you, but if you want a quick blast of space fun then this is worth picking up. It’s not the most complex of games, but Space Crew serves its purpose as a decent enough sequel to Bomber Crew. It’s a 4X game with a couple of missing Xs if you will. Poor controls and a lack of variety stop it from being a classic however.