After over two years in an Alpha/Beta state, Spellbreak launched in early September 2020 for Epic Games Store, PlayStation 4, Xbox One and Nintendo Switch, followed by a Steam launch in December later that year. The game offers a unique take on the ever-growing battle royale genre through use of a simple concept - battle royale in a fantasy setting.

Almost every battle royale game follows the same combat rules - guns. More guns. Big guns. Spellbreak breaks this mould with the gauntlet system. It follows the rest of the battle royale standard; you land, find weapons, and battle other combatants in a gradually shrinking arena. Combat is done through magical abilities that are harnessed through six element gauntlets. Upon entering a match, you choose one of six classes, which dictates your starting gauntlet and gives you skills around using this gauntlet that get increasingly more powerful as the match progresses. Once in the match, you can find more gauntlets on the floor that go on your off-hand and allow you to utilise their spells (but not their skills; that is only defined by your class) and combine their effects for some crazy results. Each gauntlet has two spells; one functions off of mana, a pool shared between your two gauntlets that also fuels your levitation, and this generally acts as a ‘primary’ attack. Then there are ‘sorceries’, which are more powerful and affect a larger area, but work off their own individual cooldowns, most of which are 15 seconds. As well as gauntlets and healing consumables, you can also find ‘Runes’ scattered around the map. You can only have one rune equipped at a time, and they offer a form of mobility or utility to give you an edge in battle. Each rune has a different cooldown depending on how drastic the effect is. The Dash rune simply dashes you a few metres in whatever direction you’re moving in, so has a small cooldown, but the Teleportation rune allows you to instantly reposition to anywhere in sight, be it horizontal or vertical, but at the cost of a much longer cooldown. Finding your prefered class and playstyle will in-turn lead to what runes you like to run.

The six classes and gauntlets are; Toxicologist (Toxic), Pyromancer (Fire), Conduit (Lightning), Stoneshaper (Stone), Frostborn (Frost), and Tempest (Wind). Each class/gauntlet encourages a certain playstyle, and the way you can combine them allows you to customise your kit to precisely how you like. You can find various rarities of gauntlets throughout the Hollow Lands —currently the only map available— with higher rarity gauntlets increasing the damage of your spells while lowering their mana cost. You can customise your off-hand however you see fit, but your primary is stuck to what class you chose, and you can only upgrade it rather than swap it out. The way certain elements interact with each other will be important when deciding on a loadout; using your Lightning gauntlet to hit a tornado created by a Wind gauntlet will turn it into a Lightning Tornado, that pulls enemies in and deals shock damage to them. Stone and Fire gauntlets can be combined to make a flame wall on the ground, and then do a shockwave attack through the wall that leaves huge flame trails across the terrain. Experimenting with the elements and learning how they interact with each other is a big part of Spellbreak, as well as learning which gauntlets complement each other in playstyle, and which ones don’t.

For example, Tempest is a class that uses the Wind gauntlet and the skills it offers gives Tempest users crazy mobility with their spells, with the rest of the passive perks making them more powerful if they are airborne. This is offset by the Wind gauntlet itself having very low DPS and an incredibly steep damage drop off; the worst of all the gauntlets. As well as this, its sorcery is a tornado that sucks people in but is otherwise harmless without another element to augment it. The Toxic gauntlet is definitely a close-range combat option, shooting a spray of poison that can do incredible damage to you if you’re unfortunate enough to find yourself in kissing-distance of a Toxic player. Generally in games, I prefer playing as mobile, high-damage classes, so having Tempest as my class for mobility and combining it with a Toxic gauntlet on my off-hand for damage was a devilishly powerful combination that suited my favoured playstyle. My friend, who likes capitalising on others’ mistakes and has very good mechanical aim, found himself drawn to Stoneshaper with a Lightning gauntlet, as the Stone gauntlets high-damage shockwave attack made short work of people who stayed on the ground, and airborne targets were more than easy for him to track with the fast firing Lighting gauntlet. Whilst Stone gauntlets are incredibly powerful, they actively discourage the kind of playstyle that Tempest rewards, as Stone’s main attack can only be done on the ground, and this subsequently means I never run Stone as an off-hand when I play Tempest, despite seeing first hand how good it can be. 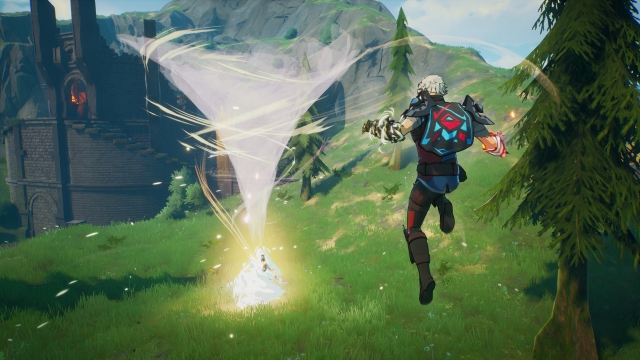 There really is something for everyone when it comes to how you want to play, and this is solidified with talents that allow you to customise your build even further, as well as adding a sense of progression to the game for newer players. You get six talent points to spend among three talents that are split into three categories, Body, Mind and Spirit, and you choose one from each. The talents cost 1-3 points, depending on their effect, and despite being named, the way the talents are split among the categories are mostly arbitrary - there’s a Spirit talent that makes you move faster, and a Mind talent that increases your health, and a Body talent that lets you see the future circles before they’ve shrunk. It is possible to choose no talent from one category in favour of taking two talents at a three-point cost each from the other two. You start with two talents available from each category, and by playing/leveling up the classes, you unlock more to choose from, to a total of four new talents per category. It’s only up to level six for each class, and the starting talents are still good, so it gives new players something to work towards without putting them at a distinct disadvantage. The talents I usually ran were Runic Fluency (Mind), which decreases the cooldown of runes and gives you two charges of your rune rather than one, which allowed me to use Teleportation as a valid approach option on long distance targets who thought they were safe from the Toxic attack, whilst still being able to escape if things went bad. My Body talent was Dexterity, which increases your jump height and decreases the amount of mana you use levitating, which obviously worked well with Tempest’s passives regarding staying airborne. My Spirit talent was Ambidextrous, which gives you the first level skill granted by your off-hand gauntlet’s class and decreases the mana cost of using it. As Toxic on my off-hand was my main form of damage, this was a must-have if I wanted to keep up with my opponents in the late-game. By opening chests and ‘exiling’ (killing) other players, you can find scrolls to level up your talents through the match, which combined with your class skills, give a real sense of becoming more powerful as the arena gets smaller and the combat gets more evolved.

Spellbreak is a breath of fresh air into the BR genre. It uses enough of the core gameplay mechanics of a battle royale to appeal to those fans, but it also sets itself apart enough to be enticing to people who don’t usually enjoy them. The learning curve is simple for new players, and experimenting with different playstyles and spell combinations will keep experienced players entertained for a long time. Given the game’s infancy, gameplay can get a bit stale sometimes after a few consecutive hours of play, and general balancing is a bit of an issue, but there are no glaring faults with the game that make it unplayable or unfun. The final ring fights in this game are genuinely one of the most fun and hectic experiences I’ve had with a multiplayer game, as everyone begins firing off spells from every element in a very enclosed space, which then proceed to react with each other and result in absolute mayhem.

Spellbreak offers a breath of life into the lungs of the battle royale genre. New battle royales have to fight hard to keep their head above the water that is infested by the titans that are Fortnite, PUBG, Warzone, and Apex Legends, but Spellbreak’s innovative gameplay might just be what the genre is looking for.

Win an Epic Key for Spellbreak

Win a Steam Key for Spellbreak

I am quite happy to visit your page. That's so amazing. 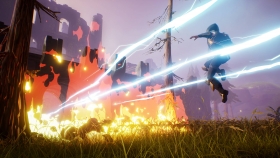