The Neptunia franchise has gone through a bunch of different genres, but recently Compile Heart appears to be putting its Goddesses into new and exciting predicaments. There was a shoot ‘em up, and now there’s this side-scrolling metroidvania, the first game from Artisan Studios. Except it’s not been marketed that way for some reason.

Super Neptunia RPG is not metroidvania in the classic sense, as all battles take place in a turn-based fashion which I’ll explain later. However, you’re side-scrolling in 2D, you go places to obtain new abilities which allow you to access things back in places you’ve already been… You can’t jump up to those gems until you have the double jump, for instance. I’m a fan of the Neptunia characters and I was looking forward to this game already, but calling it metroidvania would have doubled my excitement. What’s more, I’m sure that they chose the name because of Super Metroid. 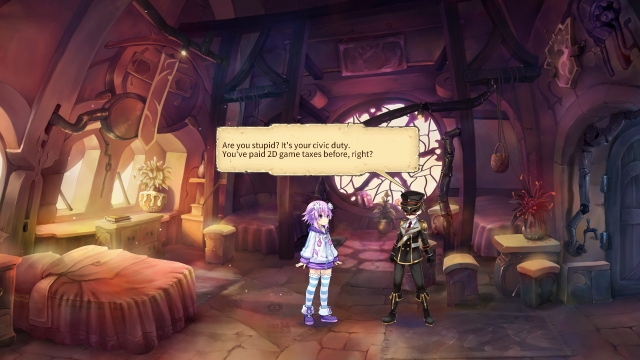 The story is that the four Goddesses wake up in an unfamiliar land, all with amnesia. Well, you don’t meet them all right away, but when you do - spoilers - they have it. The main character Neptune meets up with Bombyx Mori, a guild led by Filyn who rules Gameindusti and loves 2D games. In what I can only put down as something that’s gone missing in translation, everyone keeps calling Filyn (which rhymes with villain) “kid”. Yes she’s a child, but it’s like when people in Sailor Moon call the main character “rabbit”, because her name is Usagi - which is Japanese for rabbit. 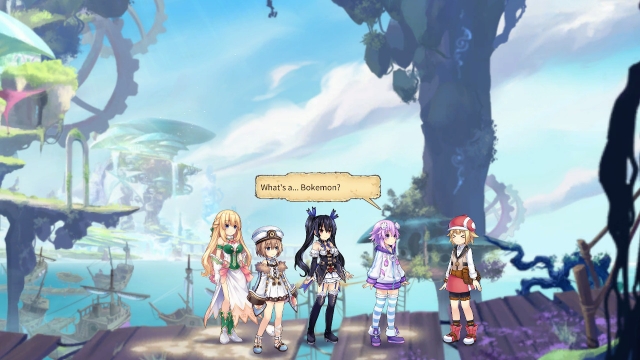 ~Bokemon, have to grab all of those things!~

I will give Artisan Studios a ton of credit for the visuals, because Super Neptunia RPG is gorgeous. Since it’s 2D, there are minimal moving parts, so the backgrounds when you’re in a town are fantastic. The characters, who do have moving parts, are also very well animated and the art team should be very proud of their work. The new characters, from Bombyx Mori as well as others, all have great designs that make them very distinctive.

Admittedly, having only played the first four games in the Neptunia franchise (the canonical ones, with all others being spin-offs) before this, I was glad for the change in location. Everything looks “fantasy” rather than “near future”. If I had to see that one cave layout one more time, I was going to crack… I’m fine with them reusing villains because it’s their “thing”, but change the locations Compile Heart…

Although speaking of bringing things back, there are a few monsters returning in Super Neptunia RPG. The one you will see a lot of are the dogoos, which are the series’ slime monsters. You don’t fight them a lot, but unfortunately they are the only non-boss enemies you will see wandering around the map. If you run into one, it starts combat with random monsters from that particular area. If it runs into you, the enemy gets to attack before you, if you swing your weapon and hit the dogoo you will start with action points. And so begins the explanation of combat… 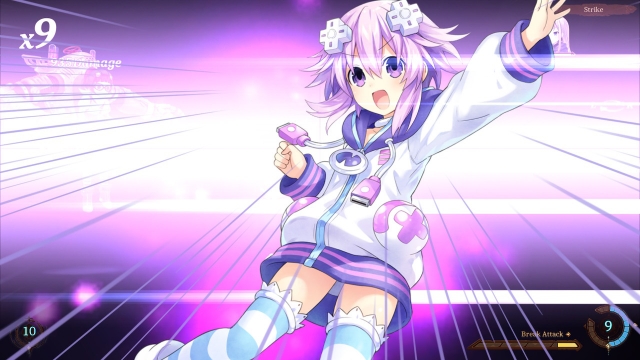 Once you enter combat, your action points begin charging. You generally require two or more per move, and can’t do anything until you have enough to do an attack or special ability. Unfortunately, some monsters can stop them from regenerating meaning you just sit back and accept a beating. If your attack is something that the enemy is weak against, you get bonus action points, though. You have up to four characters in your party at once, each assigned to a button. You can rotate the party which, if you’ve set it up correctly, will give them alternate moves to use depending on where they’re stood. You can also use items or run away from the fight, but if you decide that you actually want Blanc to use Cure (for instance) and it’s not set up, you’re stuffed until the end of the battle.

Rather than learning new moves by leveling up, which I was happy to find does restore your health, Super Neptunia RPG sees you learning new moves depending on your equipment. For example, I had a sword which allowed Neptune to use Poison Blade, so while it was equipped she could use that attack. If I swapped it out, she’d have to use another move. However, the Goddesses can learn the moves from the equipment - the better the move, the more battles it takes to learn it. This means that you will want to keep swapping out equipment, but unfortunately also means that you will probably go back to using weaker stuff just because you haven’t learned that move yet.

It’s not just attacks, as some equipment will let you gain abilities, such as higher health points. It’s a really interesting system, which keeps you from just trying to find the “best” equipment while also encouraging you to fight more monsters. It’s annoying that there’s no easy way to see which equipment everyone has used, and fully learnt - which makes selling things tedious. 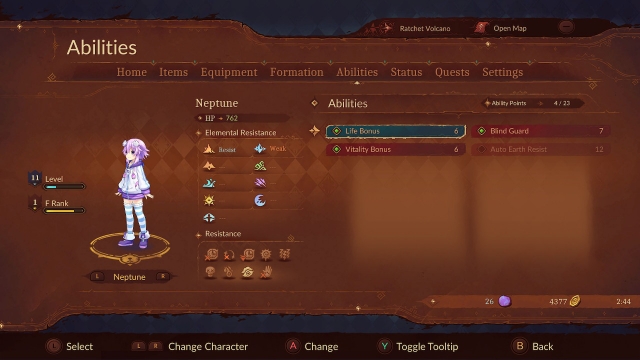 You'll get more than this

Sadly, battles can also be a little tedious with a tit-for-tat back and forth if the fight goes on for too long, as early in some fights I was able to get two or three hits in, but later on in the same battle, I was only getting one. This is compounded by the fact that the framerate jutters if the donnybrook goes on for more than a couple of minutes, in both docked and undocked modes.

At least the writing is enjoyable, as Neptune and her friends adventure around trying to regain their memories. The fourth wall breaking, Blanc’s obsession with having the smallest cup size in the group, Neptune’s pudding addiction - all of the Neptunia tropes are present and show Compile Heart’s contribution. Well, that and the CG scene which shows an up-skirt shot. 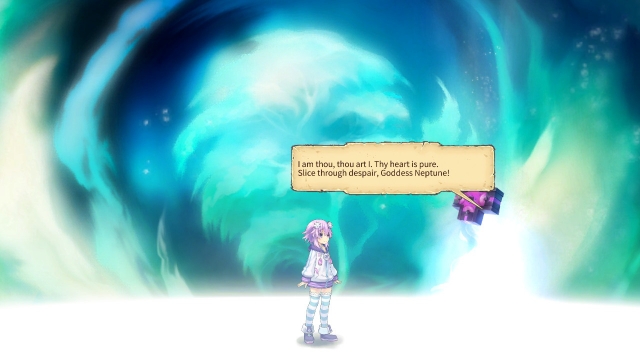 Oh, and the references

I do have a couple of design complaints to level at Artisan Studios, unfortunately. When playing with the Switch undocked, the writing is far too small to read comfortably. What’s more, things that you can interact with can merge into the background, and even deciphering which platforms you can jump onto can sometimes be hit-or-miss.

Another issue is the input lag in menus. I haven’t noticed it in fights, but since it’s all turn-based and suffering from framerate issues, I can’t promise that it’s not there. It isn’t in the platforming sections, however. But navigating menus is time consuming, and selecting new equipment will always scroll past multiple items at least once every time.

There were a couple of issues that I couldn't reproduce. The first was when the icon for the healing item Berry was replaced by a white box. The second was when Vert just started jiggling uncontrollably during a cutscene.

Finally, the tutorial screens can be a little vague. I healed the wrong person about five times before I realised that you could move the arrow onto another character.

As you progress through the game, you’ll come across tons of NPCs with marks above their heads. Talking to these people will give you optional side quests, such as delivering this letter, killing x amount of monsters, or collecting some items. Then you have to return to them and get your reward - so long as you remember what said reward was. It won’t tell you what you’ve just been given, which goes hand-in-hand with the aforementioned issues with selling things… 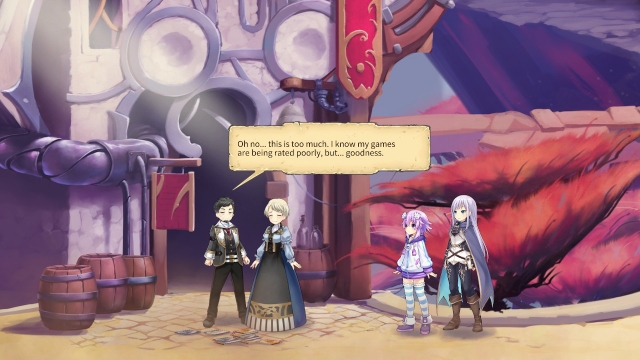 All in all, Super Neptunia RPG is a fun game, but it’s marred by some poor design choices. It’s absolutely gorgeous to look at, the voice acting is great, the music is really nice and the gameplay has a lot of nice touches. If you’re a fan of the series, or are looking for a beautiful metroidvania with a twist, then you can’t go wrong with this. There’s not as much titillation as you might find in Megadimension Neptunia VII or Hyperdimension Neptunia Re;Birth3, but that’s not the only reason you like these characters, is it? If it is, there’s some swimsuit DLC coming that you can buy, so don’t worry on that front.

Although it’s an absolute treat to look at, the fights and some odd design choices mar the experience, so this is a bit more eggplant than pudding.