Symphonic Rain is a music-based visual novel that follows the life of Chris Velding, a talented musician attending the Piova School of Music. As he nears graduation, Chris must juggle several relationships, academic pressures, and the demands of a talking fairy named Phorni. Although Chris is laid-back almost to a fault, it’s your job to make pivotal life choices for him, as in most visual novels. It unexpectedly turns out Symphonic Rain is a story of lies, betrayal, and obsession, yet it doesn’t feel that way until you approach the very end. Chris’ reality is all a facade and all but one of Symphonic Rain's six twist endings will surely blow your mind.

As our protagonist prepares for a graduation performance, he sends weekly letters to his physically and emotionally distant girlfriend, Arie. The entire story ultimately centres around their romance and how the familiar school setting never fails to threaten it. Having a bunch of girls around Chris on a daily basis is a recipe for disaster, especially when each music student is required to pair up with a vocalist for the year-end recital. It just so happens that 90% of the vocalists are females, so Chris (or rather the player) needs to make some serious decisions here. Most of this guy’s problems stem from the fact that everyone in this world is unconditionally focused on creating long-term romantic relationships, and it’s your job to watch this muddle unfold. 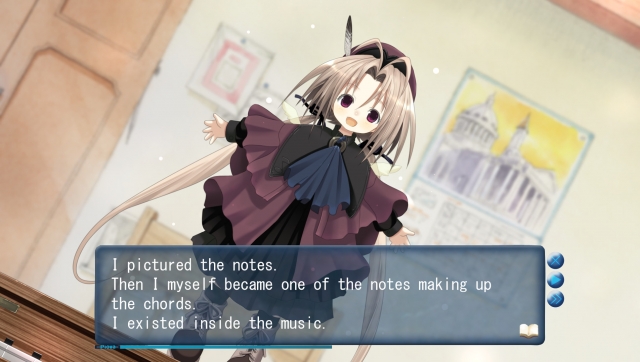 Character development lies at the very heart of Symphonic Rain. Most of the text is direct dialogue between Chris and one of his friends. Hardly do we witness a major event occurring in his life, or in anyone else’s for that matter. Discovering the ulterior motives of various characters and aiming to uncover secrets that lie far behind the guise of everyday life makes Symphonic Rain a true emotional rollercoaster. Perhaps a light surface plot is undesirable for some readers out there, but I found the slow burn to be an extremely effective technique in creating an emotional bond with the characters.

It must be noted that a large chunk of the storyline is affected by your performance on a rhythm minigame that adds interactivity to an otherwise static experience. As Chris practices on his fictional instrument of choice, the Fortelle, the player gets to experience what it’s like firsthand. The minigame itself consists of pressing letters on the keyboard as they scroll across the screen, and keeping in perfect time will raise an evaluation meter and point score. Don’t be fooled though, this game is no easy task. Pinpoint accuracy is required to be credited for a correct note, and a lot story-wise rides on your final rating. Besides this auxiliary exercise, there are only a handful of other opportunities to influence the traditional visual novel route system within the game. 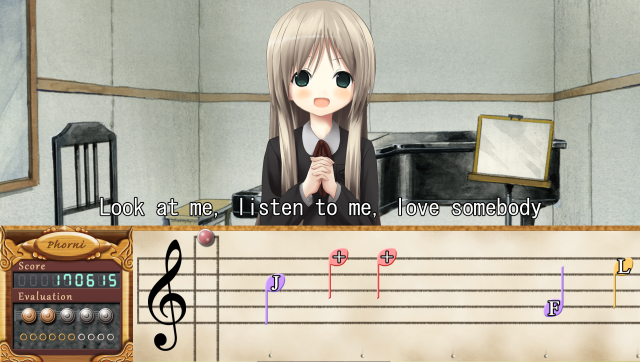 Now since Symphonic Rain is all about music, it has to have some solid tunes right? Well, I can confirm the piano-based soundtrack does it’s job. I wouldn’t say the OST is groundbreaking, but there are a few memorable tracks that you might want to grab on your music streaming method of choice. I personally enjoyed the title theme, which almost made me tear up for no reason at all before even starting the game. Throw it over the ending of Titanic, and we’ve got a real problem on our hands. Whereas the sounds of Symphonic Rain mesh, the same cannot be said for the cutesy art style. Even though the characters are in their early 20s, they all look under the age of 12. This makes for an extremely disturbing sequence during the few explicit scenes that Symphonic Rain has to offer, and creates an obvious rift between visuals and storytelling.

As I already mentioned, there are five amazing endings awaiting your arrival, so playing through the game multiple times is a must if you want Symphonic Rain to mess with your head for months afterward. When you decide to jump into this world, you have to be in it for the full experience. I didn’t find the music minigame to distract from the central story, so it was a nice addition. Symphonic Rain is perfect for someone new to visual novels, like me, and provides an unforgettable story that will stay with you for quite some time. It’s short, sweet, and packs a punch that you don’t see coming.

Symphonic Rain is perfect for someone new to visual novels and provides an unforgettable story that will stay with you for quite some time. It’s short, sweet, and packs a punch that you don’t see coming.