Talk to anyone old enough to remember computer gaming in the 80s and they’ll more than likely remember the original The Bard’s Tale games. Old-school party based dungeon crawlers that required patience and a lot of graph paper as you mapped your way around the iconic town of Skara Brae. The Bard’s Tale IV: Barrows Deep takes us back to Skara Brae with modern visuals and revamped gameplay in this long-awaited sequel. 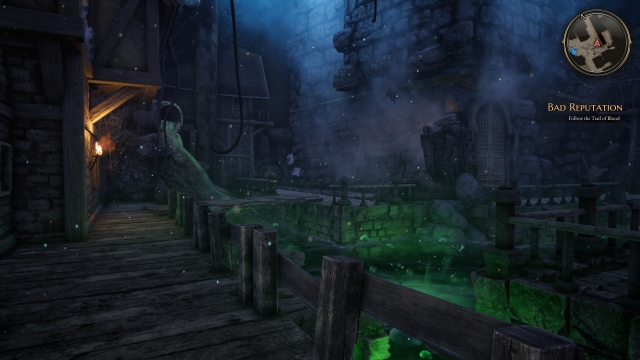 The Bard’s Tale IV, like it’s prequels, is a party-based dungeon-crawling RPG. Unlike the old games however you don’t make your entire party before you begin your adventure, Barrows Deep takes a more narrative focused route allowing you to customise the initial Bard before adding various NPCs to your party as you go through the story.

Set 150 years after The Bard’s Tale III: Thief of Fate, the land of Caith in which Skara Brae resides has a new order known as the Fatherites making the rounds and they, for some reason, are determined to cleanse the land of anything connected to the supernatural. Taking their cause to the extreme they are attempting to rid the world of Elves, Dwarves and Trow along with any adventurer that would cast doubt on their way of thinking.

Evil of course finds a way to prosper and it’s through this setup of persecution that a great enemy from the series’ past finds a way to return. It’s up to you and your party of adventurers to put an end to evil in all its forms as you pick up your lute and bash the heads of monsters to set things right. The first thing you’ll perhaps notice is that the game is exceptionally pretty, it uses Unreal Engine 4 and is not shy about using lots of primary and neon colours to keep things visually striking. Even though the game is still predominantly designed around grids you have full first-person movement which allows the environments to really shine. The Skara Brae from the old games has been completely hidden below ground, beneath the new surface-level Skara Brae allowing some vastly different environments.

Audio has also always been important to the series, with the titular Bard’s tunes being an important part of its identity. Bard’s Tale IV goes all in with this, the whole game embraces Gaelic folk music throughout, it even goes so far as to have a vast amount of voicework done by Scottish actors and actresses. This lends the game a truly unique feel and it’s all the better for it.

The world is structured in an almost metroidvania-like manner, with areas inaccessible until you learn the correct exploration song to open the way. The magic of music and sound is prevalent throughout and makes a lot of sense thematically. 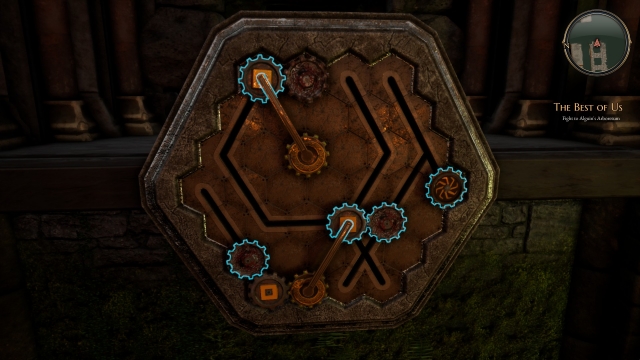 Your progress through the game is blocked by a variety of puzzles which are physically in the world. These have you completing a number of cognitive teasers like mechanical cog puzzles that require you to slide cogs around to turn specific endpoints to open doors or turn off flame traps. Each dungeon introduces a new type of puzzle to wrap your head around which keeps things interesting as you progress.

There are numerous nods to the prior games, characters, places and events all get mentioned in a way that veterans will smile at whilst not alienating newcomers. There is a reverence for the original trilogy that shines through in many parts of the game, from the recreation of the original box-art in live action upon loading through to audio cues and dialog, it very clearly is a Bard’s Tale game in spirit.

There are however a lot of changes to how the game plays and its systems, especially when it comes to combat and levelling up. Combat now takes place on a four by four grid, with your party members on the bottom half of the screen and the enemies on the top. Each of the four classes, ranging from the titular Bard with their musical buffs to the Practitioner’s mental attacks have a range of attacks that affect a particular pattern of squares on the grid. 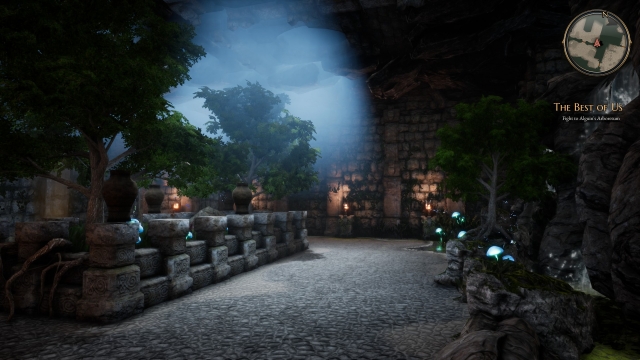 Positioning is critical and the combination of moving party members out of danger whilst setting up combo attacks makes for an extremely interesting turn-based system that is as far removed from the original titles’ attack spam as you can get. A lot of moves take time to prepare or channel which means planning ahead or manoeuvring so you can interrupt an enemy’s channel gives the combat a strategic edge that wasn’t really in the original games.

Combining your Bard’s buffs with moves that move enemies around before you punish them by setting them on fire never gets old and the system is extremely satisfying. Even rogues prove useful after being relegated to the sidelines in the originals, striking from the shadows being extremely potent here.

Levelling up gives you skill points to spend in a variety of trees per class, again a divergence from the original games, although visiting the Review Board to advance once you reach certain thresholds returns. Oddly levelling up doesn’t improve character statistics like strength and intelligence, with those mostly being affected by gear this time around. 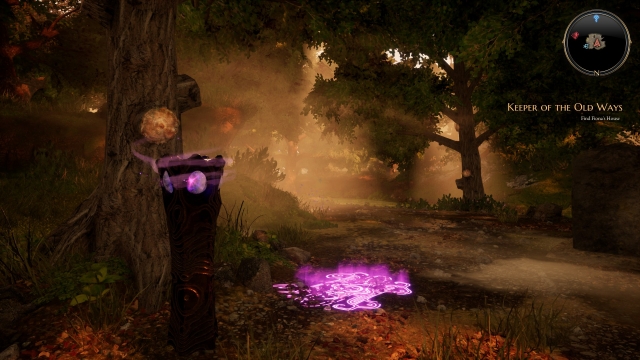 Combined with only four classes, this does make levelling up feel somewhat less exciting but the skill trees do provide opportunity for differing playstyles. These changes might upset series veterans as being distinctly unlike the 80s titles but they fit the more accessible take on the genre Barrows Deep is trying to be.

In the end, The Bard’s Tale IV: Barrows Deep is trying to balance being a sequel to arguably one of gaming’s most hardcore RPG series whilst keeping the essence of those games intact and bringing it to a new audience. It’s love for the prior games is clear whilst playing and in its own right is a fantastic modernisation of the genre that is easy to recommend beyond nostalgia for the past.

The Bard’s Tale IV revisits the classic dungeon-crawling formula from years past, simultaneously showing reverence for its history whilst not being afraid to change it up mechanically. Visually stunning with a wonderful Gaelic folk soundtrack to go with it.

Preview and Preorder Info Available for The Bard's Tale IV

I read that as "The Bard’s Tale IV: Balls Deep Review" :|

Great review though as always mate :)

I don't know why I'm not a fan of dungeon crawlers. I think it's because they look like first person games, but limit your movement...

You might like BT4's exploration at least then, even though it's still designed around a grid you have free movement as you wander about. The environments are well crafted so they don't really look like grids either! :D