FlatRedBall’s The Incredible Baron mixes real time strategy with a dose of creature collection and a SNES-era 16-bit art style. How does it fare? Is the Baron incredible? Well…

The Incredible Baron has you assisting the titular Baron and his crew in cataloguing the wildlife on an uncharted island whilst attempting to defeat the nefarious Norab. The story takes place over 30 levels spread across three worlds and is told with charm and humour; the story isn’t terribly complex but it has enough twists and funny moments to keep you plugging on. 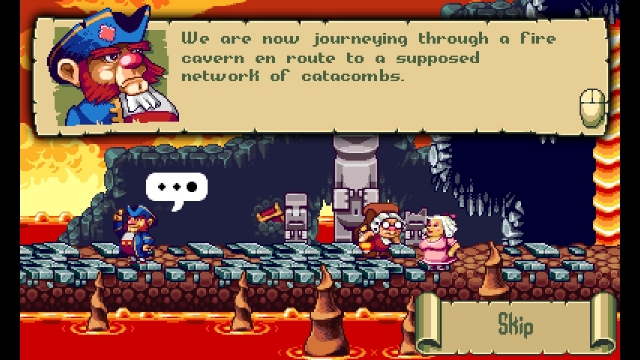 Gameplay itself consists of almost Tower Defence-like decisions with you building units that are hopefully stronger than the units being sent to you. This plays out on horizontally scrolling flat levels with your base at one end, the opposing base on the… well, opposite and usually a few obstacles in the form of towers.

Sadly nearly all the levels feel the same as they are almost all made from that same blueprint, there are exceptions of course and the beautiful 16-bit pixel art that changes frequently helps; but with no height or terrain variance to account for they all tend to blend together. 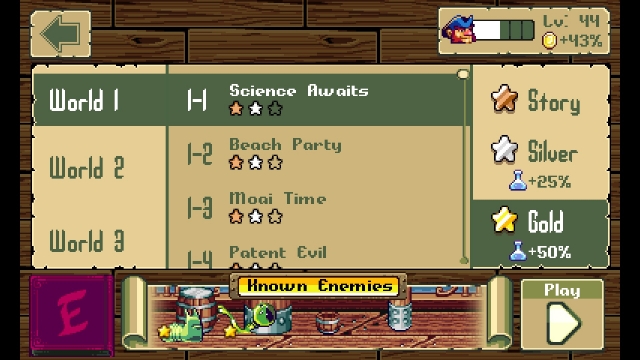 You start with a select few units, notably robotic buckets for some reason — roll with it, it’s perfectly normal — and a few personal abilities including your Flintlock Blast which is important in ‘researching’ more units. Units cost gold which you gradually earn over time, the rate of which improves as you rank up your character level by finishing stages, your personal abilities use a separate currency which you also earn over time.

Units are colour-coordinated, so red units are better against green and white for example: this is where the main strategy element comes in. Balancing your teams units to be effective against what you are facing whilst keeping things affordable.

As your units destroy others you gradually learn about them upon finishing a level, this is represented by a bar that fills, you can however speed up the ‘research’ process by using your Flintlock Blast to get the ‘last hit’ on an enemy and destroy it. Once you’ve filled the bar for that enemy/creature it becomes available for you to use. 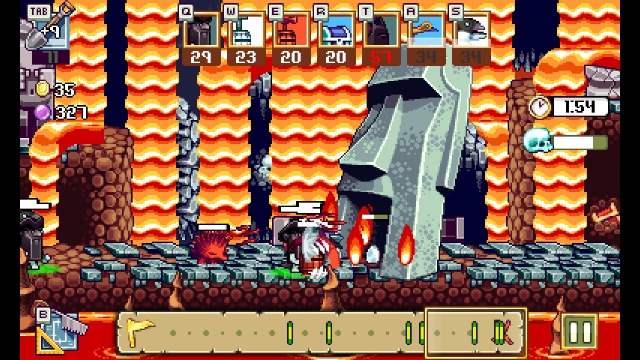 This gives the game a flow where you end up going back to earlier levels to research the creatures you don’t have to give you more things to play with in harder levels. Conversely it lets you defeat earlier levels in different ways as your unit selection increases.

This becomes critical after finishing the main story as the game has two tiers of challenge mode, silver and gold, that build on the 30 story levels by mixing up the units you face and the time limit/difficulty. This adds quite a lot of replayability, collecting all the units (50 in total) and completing all the stages on all three difficulties will take some time. 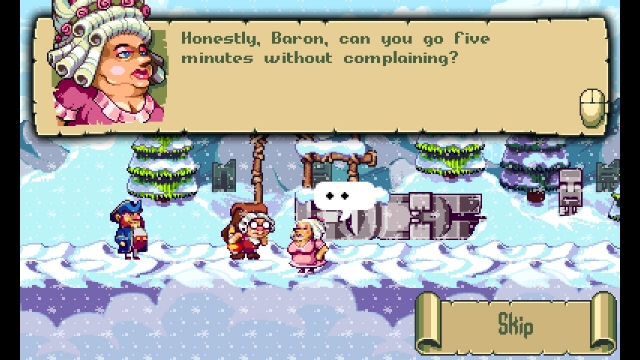 The main issue the game has is that because all the levels are flat and the only real difference is the enemies you face, it tends to feel like you are just brute-forcing each level with units. Experimenting until you’ve found units that work (or going back to research ones of the needed colour) and then spamming them until you win. Some levels mix it up a bit and require you to really spend your currency carefully and it’s a shame there aren’t more of these as they offer a change of pace that is quite refreshing..

The Incredible Baron doesn’t do anything new or revolutionary but it is an entertaining title with a jovial, charming presentation that can’t help but bring a smile to your face. The graphics and sound really help bring it all together and what other game lets you wield an army of slugs, penguins and porcupines all at the same time!

The Incredible Baron (Reviewed on Windows)

A charming strategy game with a retro presentation that is a lot of fun to play. Let down a little by not being that adventurous in its level design and feeling a little spammy. For the price it’s a strategy title worth taking for a spin.