First off, before I say absolutely anything else – I am not an engineer. Not now, not ever! I can handle several logic puzzles like a pro, but throw some wires and gates into the mix and you’ll soon discover I have devolved into a confused puddle.

In The Signal State you take on the role of a nameless and faceless fixer-upper who is sent out to an abandoned farm after a minor apocalypse. Apparently, all technology and machinery broke down and stopped working at the same time worldwide, leading to inevitable chaos. Some people – such as your fine faceless self – have the tools to restore functionality to the machinery, and have banded together in small pockets of survivordom. Your task throughout the game is to repair all of the various farm machinery by performing increasingly complex wiring tasks.

The story beyond this is rather basic: Ellis Agri-tech owned pretty much all of the farming machinery in the world when everything fell apart. You happen to have a disgruntled ex-employee on your side who knows how to rewire the things to bring them back online, and your boss wants to utilise everything to build a new future with like-minded survivors. Naturally, the shadow of Ellis looms closer with each repair you make, eventually threatening your little farm with corporate muscle. Honestly, it doesn’t seem to be much more than filler between levels – it’s very forgettable and none of the characters have any real depth. A conversation with one or more other characters happens before and after each level, and you are given the option to react in various ways throughout each one, although nothing you say seems to have any effect on how the game plays out. The option is always there to simply skip every conversation too, if you are replaying a level or just don’t care about the lore. All of this said though, I rather doubt anyone is playing The Signal State solely for a gripping storyline.

"Straight" cables. The red lines at the bottom show errors in outputs.

The core idea of gameplay is easy enough to grasp – get the signals from the basic input/s (SRCs) to the basic outputs (OUTs), with some modifications in between. All the levels I encountered had up to three of each, although very rarely was there three of either. Objectives are always available to view so you never need to worry about forgetting what you’re doing. The signal panel will show you what values are at any given timestep, both for what the SRCs will be and what the OUTs need to be. This is very important as you are never dealing with a constant signal, so it is imperative to build your circuit to accommodate the fluctuations in order to meet the objective criteria.

Even outside of the tutorial, every new module has at least one level that teaches you the basics of how it works, which is definitely a good thing as some of them are not intuitive at all to the average person. There are keybinds for most actions, but everything can also be done solely by clicking and dragging. About half of the modules are introduced in the tutorial levels, with the rest made available as you progress through the story. On any given level, a module may or may not be needed; optional modules are marked as such, but even non-optional ones may not actually be necessary to finish any given puzzle. Speaking of optional, there are also levels that aren’t necessary for progression – these are more akin to challenge stages, with the useful modules being unavailable, thus forcing you to be more creative in your solutions.

Something I shall note is that – for me at least – the difficulty curve seemed rather spiky. Granted, as I said I’m no engineer, but just three levels after the tutorial I was stuck on a single level for over an hour, while the final couple of levels took 15 minutes tops. Overall though, the puzzles absolutely require thought and patience; this is not a game for casual players or those who want to quickly blast through something. 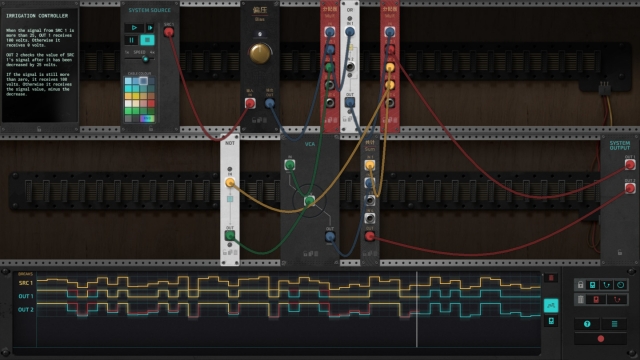 The Signal State’s art style clearly prioritises functionality, but this is necessary since things can easily get confusing to look at when there are cables hanging all over the place! That said, everything still looks very good. There are two or three scenic pictures done in a really nice hand-painted style that are used throughout the game, mostly of the farm. On the main screen used inside of levels, everything is as clear as you could hope for when moving modules around trying to decide what on Earth you actually need – the screenshots throughout this review show examples of the level layout. Every module is also coloured its own way, which helps to easier distinguish between them. Finally, the cables have their own little set of rules – you can let the game either randomise the colour of every cable you place, or you can pick and choose from a medium-sized palette. Additionally, the settings allow you to switch up their transparency and droopiness too.

The audio is rather a let-down; there is very little of it, looping endlessly, so you are likely to get your fill after a short time. Whilst it is fairly non-intrusive and probably will help some people to focus on the problem in front of them, I ultimately decided to mute the music and listen to something else while I played, as I found it too grating on my ears.

Every level has a two leaderboards (one for the initial playthrough of a level, and one for after you complete the game and replay a level), so for those so inclined you are able to test your builds against other players – however, being a puzzle game there are definitely optimal setups that cannot be bested, and all the top spots will already be filled with the first players to reach that perfect build. If you get stuck at any point in a level, you can ask your boss for hints; she will never tell you the exact solutions, instead commenting on what modules you should be including, or how to accomplish something that may be a little less immediately obvious. Even after exhausting all of the hints you may still find yourself having to ponder the answer, which is a testament to the difficulty! 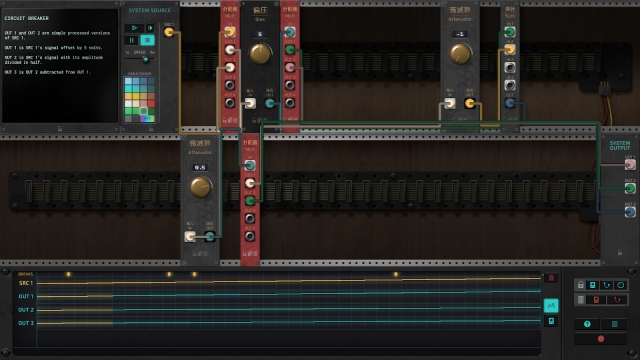 "Right-angled" cables. At last, a solution!

I was happy with the time I spent on The Signal State. It’s a very solid puzzler that will likely appeal well to players with a background in this sort of thing, and particularly determined puzzle enthusiasts will also get their time’s worth. However, I simply cannot say this is a game that will suit the majority of gamers.

The Signal State (Reviewed on Windows)

A taxing puzzler that very much has its roots in electrical engineering logic. Sadly, the lacking audio and niche target audience bring down an otherwise decently solid game.