There Is No Game: Wrong Dimension Review

If you’re looking for a game, then look elsewhere. There is no game here. …

… Or maybe there’s several of them—perhaps all of them? There Is No Game: Wrong Dimension (which will shed the “Wrong Dimension” subtitle for the remainder of this review) is hard to process, let alone discuss. It’s dense; every beat is a story beat; every second brings something new and exciting. To try and explain it would, largely, ruin the experience. Writing a spoiler-free review of this game is practically impossible. Still, it’s my duty as reviewer to toe the ever-so-fine line between judgement and spoiler, and it’s a duty I take very seriously. So without further ado, here’s my spoiler-free-ish review of a game that is almost entirely made of spoilers. Wish me luck. 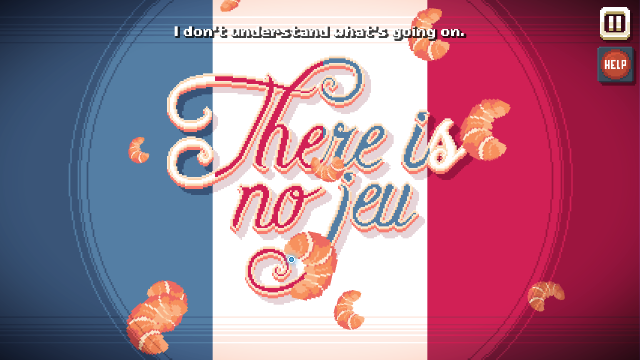 There Is No Game is what happens to a point and click adventure title when it’s left to stew in its own anger and disillusionment with the rest of the gaming landscape for… oh I don’t know, a decade or two? It’s a genre-bending, self-aware criticism of videogames—new and old—with all the trappings of a classic point and click adventure and so much more. It’s got a few poignant moments, a bucketful of surprises and more laughs than any game I’ve played since Portal 2. It’s only a few hours long, maybe five to six if you’re particularly bad at adventure game puzzles (like me), but every sequence is memorable and feels important. There Is No Game is about as tight of an experience as they come; not a moment is wasted and most of the jokes hit their mark (which, for videogame comedy, is a serious achievement). With all the vagueness, it might not be entirely clear what kind of game There Is No Game actually is. That’s not hard to believe considering I played the thing and I’m not fully confident myself. What I can say is that it most resembles a point and click adventure of the Lucasfilm Games or older Telltale variety. (The Secret of Monkey Island; Maniac Mansion etc.) That means you’ll be solving puzzles (or problems, if you prefer) with a variety of random, and usually unsuitable, objects. As such, you’ll usually find the solution to said puzzle (sorry… er, problem) in the most nonsensical of places. “Here’s a firehose, your dog’s chew toy, a broken dart and a single piece of tape; go break into that bank vault”. Sound insane? Yeah, I know: welcome to adventure games. 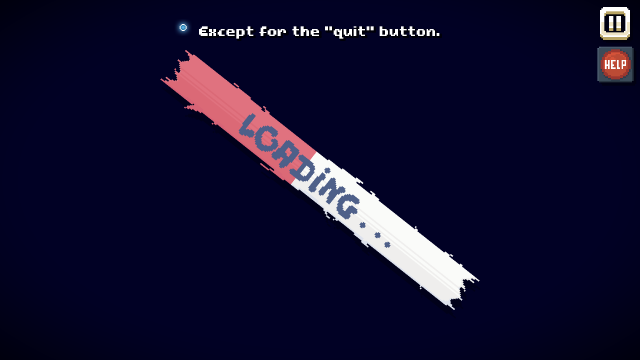 I know it’s a time-honoured point and click tradition, and the arbitrary nature of this game’s puzzles are mostly charming, but there’s no getting around the fact that actually solving them is an exercise in trial and error more than ingenuity. It’s a shame too: the solutions themselves are entertaining in a mad sort of way, but more often than not, solving them feels like a roadblock, not a challenge. Again, I’m aware that criticising a point and click game for illogical puzzles is like criticising grass for being green, but if something’s not fun, no amount of “tradition” is going to change that. Still, the game provides a generous amount of hints for almost every puzzle, so if you’re willing to swallow your pride, the puzzles needn’t cause too much grief (I admit to caving in once or twice… or three, maybe four times). 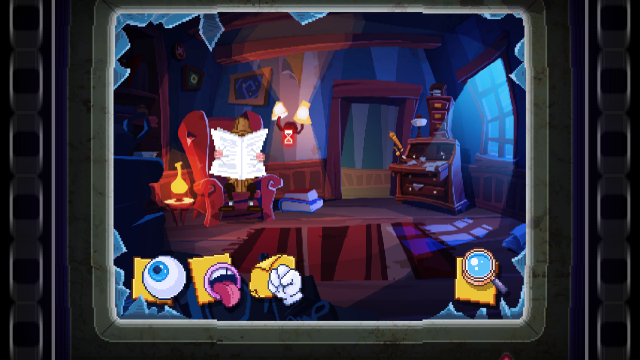 One of the more 'traditional' screenshots

Don’t take my earlier “anger and resentment” line too seriously with regards to There Is No Game’s tone. It does poke fun at games and game design, but not in a mean-spirited way (mostly). The title captures the spirit of two close friends giving each other a hard time, not out of spite, but out of admiration. What’s more, it invites the player along for the irreverent ride, making them a participant in the humour, not just an observer. This design/writing choice is truly remarkable and leads to a good number of genuinely laugh-out-loud moments. It must be said that, like most comedies, the best jokes and surprises are frontloaded, falling to the wayside as the game approaches its climax. Thankfully, when the torrent of humour eases to a trickle, other aspects of the game’s presentation pick up the pace. It feels deliberate, like a shift in gears rather than a foot on the brakes.

When I think of games that made me feel the same way as There Is No Game, only The Stanley Parable comes to mind. If you’ve played it, you know exactly what I mean; it’s something that stays with you. While I don’t think There Is No Game quite reaches the same heights as Stanley, they’re at least climbing the same tower, which is more than can be said for just about any other game in existence.

There Is No Game : Wrong Dimension (Reviewed on Windows)

An experience that pulls from gaming’s best (and worst) bits to create a wholly unforgettable few hours. There is No Game: Wrong Dimension, is not just a game: it’s something very different and a little bit special.

There Is No Game: Wrong Dimension Official Trailer

There Is No Game : Wrong Dimension