It’s hard not to describe Dejobaan Games’ Tick Tock Bang Bang as ‘a bit like SUPERHOT’ as it takes that game’s central mechanic, that time only moves when you do, and ties it into a first person puzzle/shooting game. Beyond the core similarities though they are quite different monsters.

On first glance, the visual style of Tick Tock Bang Bang is very reminiscent of SUPERHOT too, nice clean flat colours with a minimalist style. However, the aesthetic isn’t quite as cohesive as that title. It still looks really nice though with plenty of bloom-style effects giving it a futuristic, blown out look. 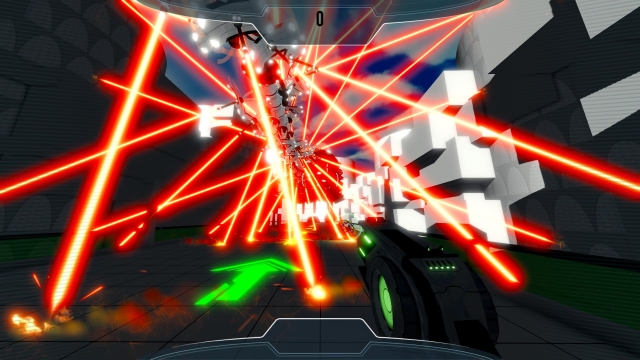 The setting of the game feels a bit threadbare though, you play the role of a stuntwoman, Delta-T who can inexplicably negate the passage of time giving her oodles of time to think and dodge her way through each set piece. This conceit is expanded on by cameras placed within the levels, but sadly nothing ever comes of it. I was expecting your runs to be strung together into an full-speed action shot or similar at the end of each set of levels but that doesn’t happen.

Speaking of levels, the game has 51 of them with a variety of objectives, some are basic ‘get to the exit’ style affairs with others requiring you to destroy all enemies or kill a boss. All of these are relatively short affairs and are stringed together in a basic menu system where you move from one to the next. Nothing story-related (except perhaps some of the level titles) tie it all together which again makes the stuntwoman conceit feel bolted on. All of them have a leaderboard tied to them so you can compare your time to others. However, nothing is tied into that mechanic to encourage you to replay them other than for self-improvement. 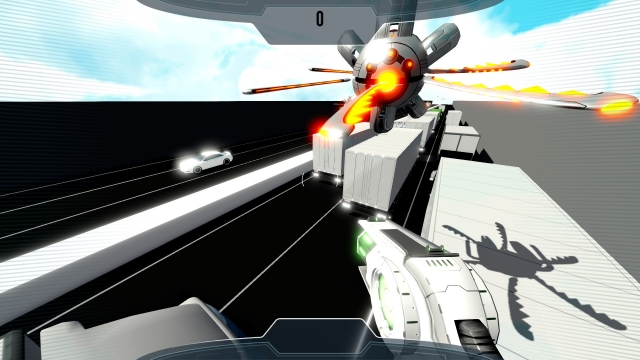 The game itself is a lot of fun to play, getting from A to B whilst dodging traffic and or enemies is great and has a great feel to it. The combat focused levels too feel almost zen-like once you’ve figured out how best to take out the enemies and it flows just right. The games does however rely very heavily on trial and error, except some elements don’t happen the same every time; whether that’s enemies firing patterns differing or vehicles hurtling at you in a different manner. It makes some levels feel unfair or makes them much harder than they’d otherwise be.

The enemy designs are great, and whoever came up with the design for running humanoid robots is a monster, they actually made me jump on numerous occasions as they appeared through an explosion. Dejobaan came up with some pretty unique robot designs for their earlier game, Drunken Robot Pornography, and that continues here.

All in all the game is pretty short — whilst 51 sounds a decent amount, the levels are often seconds long and my total playthrough took around two hours and that’s with some of the levels taking multiple retries. It’s a lot of fun playing through the game and I couldn’t wait to see what was in the next level, the level designs and some of the puzzles themselves are pretty clever and that was a great draw to pull you through to see the rest. There are some level creation tools built in for people to create new arenas and boss fights which has Steam Workshop support too, so over time we could see some fun things from that. 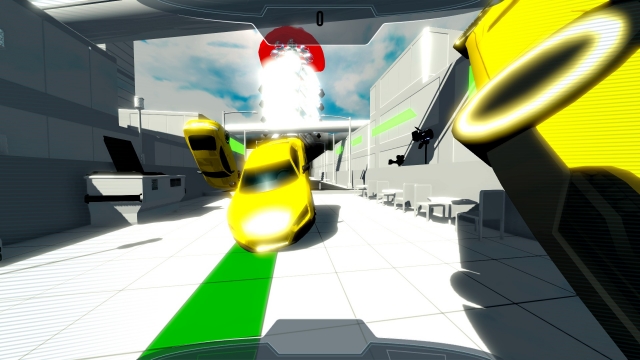 Tick Tock Bang Bang is a fun, interesting take on the time-pause puzzler genre but it feels a little underbaked when it comes to both presentation and content. The core of what is here is great, it just feels a bit soulless as a complete product.

Tick Tock Bang Bang does some interesting things with the time-pause puzzle concept but it doesn’t feel as cohesive and polished as it should. If you are looking for something similar to SUPERHOT to satisfy your first person puzzle urges it’s worth a gander.