I’ve always been a fan of time travel, ever since Sonic The Comic had a storyline adapting the events of Sonic CD in 1994. If you want me to try a game, stick an element of time manipulation in it, whether it’s stopping time or traveling through it. Obviously, the description of Time to Stop Time intrigued me greatly! Travel through time, slow people in their tracks and murder them with their own bullets!

The story is pretty simple - a virus was released, killing billions, so you’re being sent back in time to stop it. This being a videogame, of course, something goes wrong and before you know it you’re fighting futuristic mechs, Nazis and people armed with bows & arrows.

As you play, you soon realise that Time to Stop Time is not an action game, it’s a puzzle game which happens to be full of action. When you enter a level, people react by firing at you. You slow time to a crawl and begin the task of killing everyone, destroying all helicopters/tanks/both, and making sure that innocent civilians don’t die. You can fire guns, throw grenades & knives, get in vehicles and fire their weapons… You can also grab hold of anything or anyone and throw or place them down, this includes bombs, mines, people, barrels, crates and lots of other things. Your missions always boil down to “wipe out everyone”, with minor alterations in the number of enemies, and whether or not you need to prevent civilians from dying. You have a time limit, which is upgradeable, and once it runs out things resume whether you’re finished or not. You also have an energy bar which governs how much you can do. Certain actions, like sprinting or being injured, will deplete it faster - once it’s empty, time resumes.

Of course, things start off pretty easy. Run around kicking people into the air, throwing knives at others and using the odd person as a projectile. Things escalate, and before you know it there are enemies whom can move at super speeds and chase you around the levels while you’re trying to destroy helicopters with tanks. To aid you, completing certain levels will increase the number of points you’re allowed to allocate to items such as energy drinks and grenades, as well as time and energy. However, don’t let it be said that Time to Stop Time makes things easy on you as you progress through the 40 levels. At first, you can only fire a single round from each weapon because you’ve slowed down time. Similarly, grenades won’t explode until something hits them, or you skip time forward a moment. That will affect any ordinance currently in mid-air, whether you fired it or not.

I honestly enjoyed Time to Stop Time, but it does have its issues. Every voice in the cutscenes is noticeably done by one person, whether they’re doing their Action Hero, “Obama” or “Morgan Freeman” voices it’s distracting. Some of the exposition is done through literal magic, too, which doesn’t help the story make any more sense.

Sure, the single voice actor will have cut down costs, but they appear to have skimped on the assets used. The character models & vehicles are fine - not great, but fine. However, the locations sometimes don’t make sense. At one point, you’re sent back to Dallas, 1963, to save President Kennedy. Sure, the level had to be constructed a certain way for the assassins bullet to travel at the same speed as all of the other bullets, and it probably wouldn’t have changed things if it was a four-seater instead of the two-seater car used. Hell, they probably got the obelisc and statue of a suit of armour in the same asset pack as something else, so threw it in. What’s unacceptable, however, is that the nearby fast food place, which you can enter to get some items, has those touch-screens that you can order your food from. In 1963. 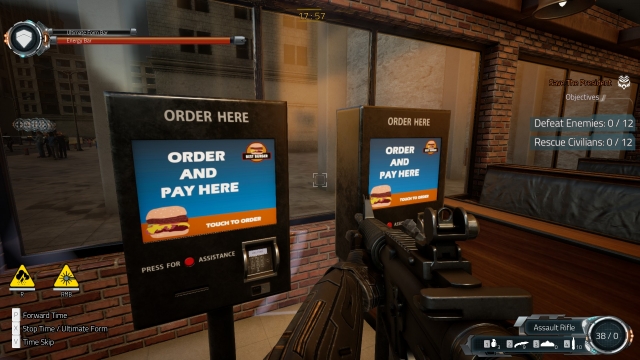 IT HAS A CARD READER!

Finally, not helping the story is some of the odd writing. You’ve just discovered that something happened in 1944 that you need to go back to check out. In a cutscene, someone says “France in 1944? That’s when the Allies are supposed to storm Omaha Beach. We will send you there a day earlier and see just what history has missed.” A lot happened in 1944, which “day earlier” did they mean, and how could they possibly know which of the 365 days?!

These are, admittedly, all minor issues. Time to Stop Time took me around six hours to finish, and get all of the achievements. That’s not bad for the price, but once you’re done there’s not much reason to keep playing. You can replay any level that you’ve completed, so you can try things in new and more interesting ways with more energy and time, but bear that in mind when making your decision. Your playthrough might take less time, because you don’t keep getting decimated by the laser swords, but it may take longer, too! But don’t worry, you’ve got time.

Time manipulation with an action hero instead of a prince. It’s an interesting puzzle game in the guise of a first-person shooter, and if you ignore the story there’s a lot of fun to be had here.