I read an article once discussing colour theory. It fought tooth and nail, citing decades of studies and building grand, multi-faceted arguments to make the point that humans are hardwired to respond emotionally to the sight of certain colours. I admire the author’s effort, I really do. It just seems a shame that, throughout their presumably lengthy research period, nobody thought to swing by and drop a loot-based videogame in their lap. After all, just a few hours jogging the loot-treadmill of titles like World of Warcraft, Destiny, Borderlands or [INSERT LOOT GAME OF CHOICE HERE], with their near-universal green, blue, purple and orange loot rarity identifiers would be enough to dispel any belief that colour has no bearing on emotion. Hell, even the fiercest sceptic of colour theory would soon find their doubts melting away in the warm glow of their first orange/gold item drop (it’s true: you never forget your first).

On second thought, maybe it’s a good thing that the article’s author never used loot-based videogames in their research. It’s possible that, if they had, the article would never have been finished. Instead, it would have been forgotten in a dark, addictive haze of XP, grinding and number crunching occasionally punctuated by that oh-so glorious golden loot aura: a true dopamine cocktail.

The addictive, neurochemical-leveraging nature of loot-based games is well-documented, and anyone with a tendency to get hooked on their cycles of endless (arguably aimless) progression should be very careful. I say that with a degree of confidence because, as shameful as it is to admit, I am one of those at-risk players. Whether it’s Diablo or Cookie Clicker, anything with gradually increasing numbers and/or the promise of a rare loot drop can get me signing away my free time (and most of my responsibilities) quicker than you can say “level up”. 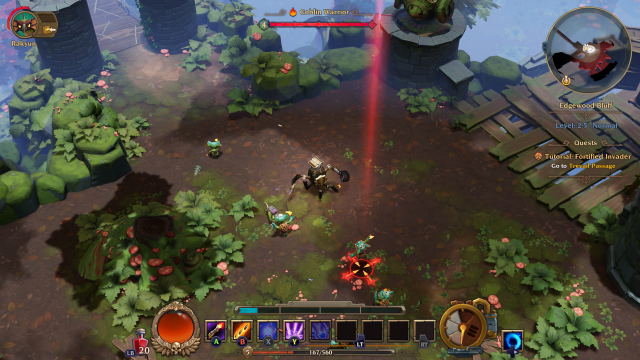 So it was with simultaneous fear and anticipation that I first dipped into Echtra Games’ action-RPG Torchlight III. Taking over from Runic Games, developer of the first two Torchlight titles, Echtra Games initially saw fit to take the franchise in a new free-to-play direction. When that new direction, titled Torchlight Frontiers, seemed to head towards a place devoid of anything resembling fun, the team decided to change course and create a more traditional Torchlight title with a microtransaction-free “premium” business model to match. And so, after years in development, an identity change and around four months in Early Access, Torchlight III was released.

So how is it? Well… it’s fine—pretty good even—but where its numerous competitors boast life-devouring hooks like razor sharp talons, Torchlight III barely musters hooks apt to hang your coat on. Don’t get me wrong, there’s nothing to fault with the core gameplay. Dungeon crawling and mopping up hordes of foes from a familiar isometric perspective is always going to be a joy, particularly if, like me, you’re one to find pleasure in marvelling at gathering clouds of damage numbers and basking in the distinct (albeit, in this case, comedically anticlimactic) level up chime. 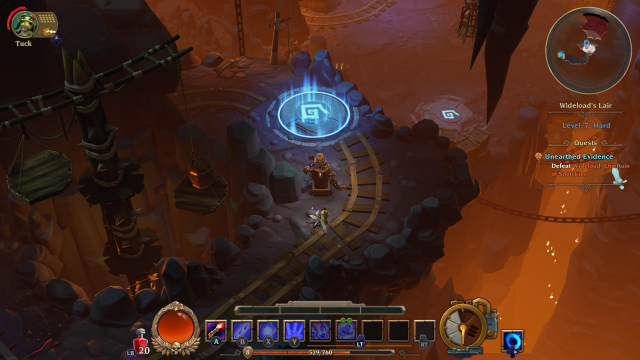 Unfortunately, while the gameplay holds its own, there’s not much to keep players here in the long run. The endgame offering, an interesting series of increasingly challenging dungeons with various buffs and handicaps, suffers from a lack of clear drive and sense of overarching progression. Even with an enchantment mechanic, letting players reroll the elemental effects and bonuses of items, the endgame fails to provide much depth. So Torchlight III truly isn’t ever going to become a mainstay of anyone’s gaming rotation, not even with friends in online co-op mode. This isn’t Path of Exile; it’s hard to imagine a sizable fanbase chewing through Torchlight III’s dungeons for dozens, certainly not hundreds of hours after the campaign has wrapped up.

Who says games have to last forever, though? When taking Torchlight III as a 20-hour long action-RPG with a clear-cut ending, it suddenly becomes a lot easier to look upon the journey fondly. It was, after all, immensely satisfying watching my little fire-spitting, electric bolt-emitting robot, Ronny-Four (named after Johnny-Five of Short Circuit fame), gradually become a force of destruction, learning to cut through hordes of enemies like an electric razor cuts through hair. 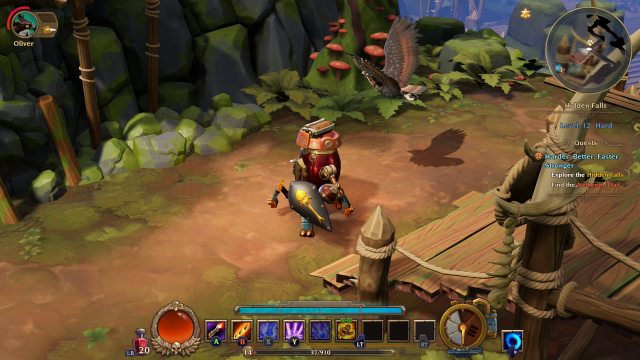 Of course, when I talk about a “journey”, I’m solely referring to the personal player journey of character progression; the actual story here lacks anything much in the way of substance, merely serving as a weak through line justifying three acts worth of locations, enemies and bosses. Saying that, universe-building audio logs can be found scattered around the various dungeons, usually from the game’s main villain or its three underlings, but most of them are about as interesting as a shopping list recital. This isn’t too much of a criticism mind: I don’t think many players would give two hoots about the story here even if it were worthy of its own HBO mini-series. If you’re playing a game like this without chatting to friends, listening to podcasts or engaging in some other background activity, you’re doing it wrong—at least as far as I’m concerned.

So the gameplay, based around building up a ‘loadout’ of syngergising skills and tearing through countless enemy-filled dungeons, is what the vast majority of players are here for. Oh, and the loot grind too; we can’t forget the loot grind. For whatever reason, despite offering a broad range of skills to play around with, Torchlight III seems to discourage class experimentation. There is no way to reset a character’s skill points and rebuild their skill loadout from scratch. Skill points can be refunded one at a time (thanks to cheekily-named “respectacle” items), but this is a costly process; if a player wants to fully re-spec using this method they'd better have a plan ready beforehand. 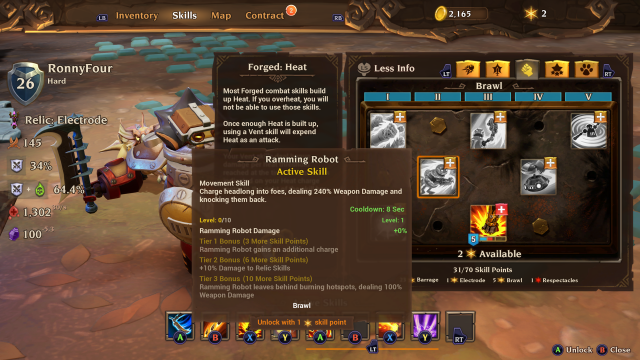 Luckily, I stumbled upon an effective skill setup early on, one that made use of my class’ heat-based energy system. Essentially, while some of my attacks built heat, others expended it in a variety of explosive ways. Fighting with this constantly fluctuating heat meter was an interesting, somewhat atypical take on the traditional mana systems that accompany characters in dungeon crawling action-RPGs like this. And when supported with my character’s electricity-based Relic skills (basically a sub-skill category with a separate power meter), the combat took on an engaging rhythm that kept me hooked for the story’s duration.

Less engaging are the handful of mechanics and systems which can mostly easily be described as “poorly implemented”. There’s a Fort system, which sees players building up and decorating a persistent home base throughout their journey. That is, if they choose to engage with it and not just plonk down the five or six actually useful stations, never opening up the decoration menu again. Come on, this is Torchlight. It’s not Animal Crossing; nobody wants to interrupt the flow of gameplay with a spot of interior design. Frankly, the whole Fort system feels like a holdover from the game’s free-to-play origins. They’re not the only thing that feels improperly translated from free-to-play to premium either. Pets, while a core part of the Torchlight series, seem oddly disposable here. Every 20-30 minutes it feels like I encounter a new pet to accompany me on my journey, but the difference between each one is minor, and that’s if there are any differences at all. I can only assume that, in the game’s free-to-play state, pets would have acted as a significant incentive, something to spend money on. In the non-free-to-play game, however, having them as a reward feels genuinely pointless. I must have amassed dozens of near-identical llamas, dogs, owls and eagles throughout my playtime. I think they’re all waiting in some storage locker back at the fort. God knows who’s feeding them. 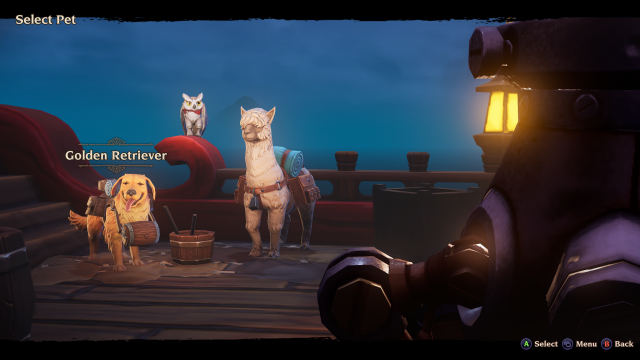 Choose your first pet wisely: you'll only get 1001 chances to choose another one.

On a technical level Torchlight III functions perfectly fine, barring a couple of technical hiccups—at least on the Xbox One X—including noticeable slowdown during hectic moments and some instances of menus refusing to respond to inputs (quickly remedied mashing the pause button). This is undoubtedly a game that will get the most attention on the PC, but it should come as a relief to console players that they’ve not been left out in the cold with a dodgy console port.

When it comes to dungeon crawling action-RPGs, Torchlight III may offer the bare essentials with enough competence—it really is fun to blow through enemies, collect loot and watch that XP bar fill up—but it doesn’t follow through with enough depth to really pull you in. It started life as a free-to-play title, and by all accounts it shows. Torchlight III won’t bore you, but it’s just not engaging enough to become your next gaming obsession.

Torchlight III started life as a free-to-play title, and by all accounts it shows. It won’t bore you, but it’s just not engaging enough to become your next gaming obsession.