While Creative Assembly worked on the main course offering to its ever-hungry fans: Total War: Warhammer, a separate team in the company spun off to create an aperitif to in the form of the new Age of Charlemagne DLC. Expanding the setting of Total War: Attila into the medieval period, Age of Charlemagne builds upon the work of the previous DLC package for the game: The Last Roman.

Age of Charlemagne delivers a ‘redesigned’ setting in the way that it chops off the east and south portions of the original world map and focuses on northern, central and western europe. The world has changed when the game starts, with a number of new factions to choose from in order to reflect that. Each faction comes with its own unique buffs and debuffs, tailored to their historical tendencies.

Displacing the Romans are the Lombards, a Germanic tribe who have settled in upper Italy. Arrayed in various places around the map are the Avars, Saxons, Danes, the Kingdom of Cordoba, the Kingdom of Asturias and of course the Kingdom of Charlemagne. Apart from the Danes and the Charlemagne's own faction, each has a fairly uninspiring roster of troop types consisting of lightly-armoured levies interspersed with one or two heavy troops gained in late-game. 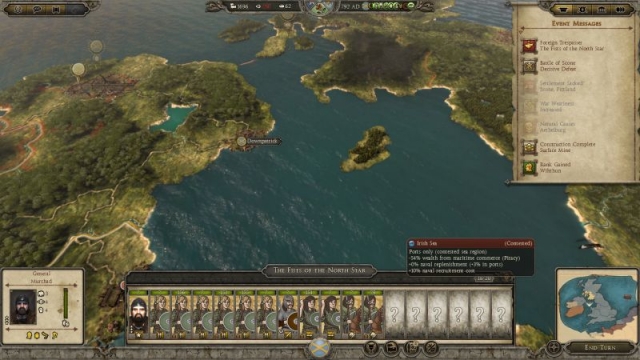 Creative Assembly appears to have gone all narrative on its fans, though. Throughout the campaign for most of the factions you will be given missions that form up similar to quests and story chapters. Failure to meet their demands can often mean frustrating consequences. For example, failing to sack enough cities as the Danes results in mutiny and a crippling of your economy.

War weariness, a new mechanic introduced with this DLC, is another concern. The longer you’re at war and the worse that you perform, the more likely your people will rebel or protest. This can be alleviated by winning one-sided victories and avoiding calamitous defeats. The system adds an extra layer of depth to campaign planning and continuation, especially when you start fighting multiple factions at once.

The game’s visual style harks back to stylised ways of Total War: Rome II, giving unit cards a style similar to medieval paintings and religious tomes, whilst equipping the menu and UI with flowing patterns and shining gold. In-battle the units still look as detailed as ever, despite the lack of individuality offered in terms of rosters. 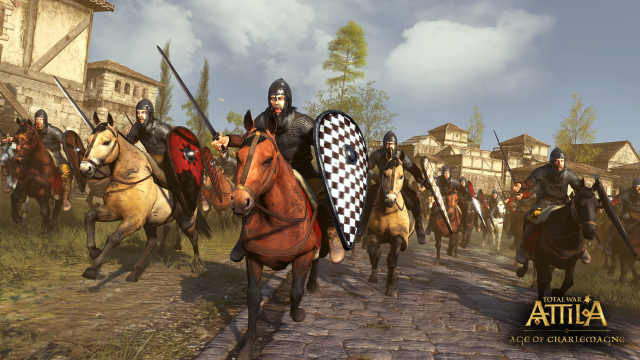 Rather disappointingly the DLC re-uses battle locations and cities from the original game. Many of the locations in Italy and former Roman provinces, for example, have buildings and designs that look distinctly 5th century despite this game being set long after that era.

Despite this during my time with Age of Charlemagne I found no game-breaking issues, glitches or bugs. In fact I found relatively few at all. Creative Assembly appears to be practising their bug-elimination skills with each DLC release, which leaves some hope for the launch-status of the upcoming Warhammer title.

With a set of interesting challenges, mechanics and a new setting to play with, Age of Charlemagne won’t be the Medieval III that fans have longed for but will go some way to whetting people’s appetite for the release of Total War: Warhammer later this year.

Age of Charlemagne is a great way to improve on a Total War engine that sorely needed extra testing and bug-cleaning. Tight, attractive and challenging, it's the perfect way to prepare for the upcoming Total War: Warhammer but also a good DLC in its own right.