Creative Assembly has released the second “major” faction expansion for their magnum opus, Total War: Warhammer. The first of the two, released last year, focused on the centaur and fawn-like beastmen who roam the Old World in itinerant warbands, braying and looting. Now Realm of the Wood Elves introduces perhaps their mirror opposite - the elves of Athel Loren.

Whereas in the beastmen expansion the developers adapted their horde mechanics from Total War: Attila, the wood elves are a faction that are more traditional in style. The elves are isolationist, xenophobic and insular by nature, and Creative Assembly have created some interesting ways of keeping them in their forest homes while also enabling a player to expand their empire.

The wood elf strategy, whether the miniature add-on campaign or the grand main event, is to build up the Oak of Ages, the centrepiece of the foreboding Athel Loren forest. To do so, the elves require a new resource: amber. Amber can be collected by taking over enemy settlements and converting them to elven outposts or through diplomatic alliances. You’ll need a lot of the stuff, too, as amber is necessary for all top-tier units, buildings and research. 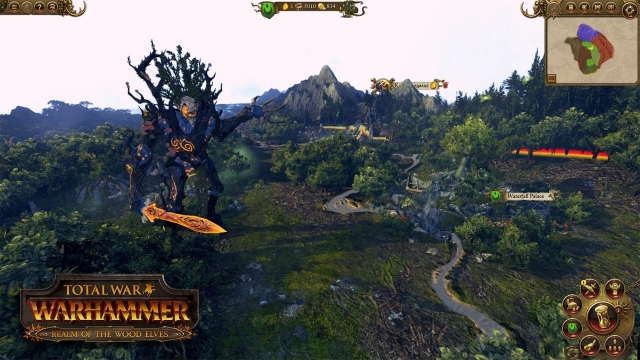 Anything conquered outside of Athel Loren can only be lightly defended by an outpost, meaning that your borders are almost constantly under threat and quick movement of troops is a must. Thankfully, elven armies can make use of worldroots, pathways that enable them to bypass rough terrain. The faction’s traits often lead to a precarious method of expansion, where diplomacy is a must and over-stretching your forces can be fatal.

The elven roster has been defined by the developers as filled with classic “glass cannon” units - powerful but also extremely fragile. Consisting of melee specialists, archers that can fire on the move and small but fast units of airborne and melee cavalry, playing as they elves can be a micro-heavy experience on the battle map. Their high morale and low unit numbers mean that holding the line is never really an option if you don’t want to lose valuable unit strength.

Wood elf armies are essentially your perfect hit and run types - though one of the legendary heros in the roster can unlock the sturdier tree-men and monstrous infantry. Elf units also gain buffs when they fight inside forests, though their increased range and damage is somewhat negated by the fact that trees in Total War games tend to soak up most of the missiles fired by archers. The mini-campaign that comes with the DLC - much like the one packed in with the beastmen pack before it - is a drilled-down experience that adds more provinces to the forest of Athel Loren and forces you to deal with multiple small bands of beastmen as you try to expand your influence. It’s an interesting way to introduce players to a new faction’s playstyle, and though Creative Assembly usually places rewards at the end for finishing these bite-size sections I can’t see many people forging ahead to complete it.

Total War: Warhammer’s AI has certainly been affected by the DLC and its update. Diplomacy has taken a turn for the worst, with forging alliances between elven factions incredibly difficult. AI elf players seem to be given far too much leeway, too, as despite running massive amber deficits, they’ll more often than not explode out of the forest and be the most dominant faction by mid-game.

Realm of the Wood Elves is another piece of non-essential DLC that Creative Assembly is marketing in “don’t want it? Don’t buy it” fashion. Those who don’t will still see the elves as enemies on the map and be able to fight players who do in multiplayer, so no problems there. Those who are looking to add some pointy-ears to their game will find a faction with a high skill ceiling and impressive design. At £14 for just one faction, however, you might want to wait until it’s on sale.

Those who are looking to add some pointy-ears to their game will find a faction with a high skill ceiling and impressive design. At £14 for just one faction, however, you might want to wait until it’s on sale.