Unfortunately, all of these faults are only too apparent in action RPG Trapped Dead : Lockdown.

Let us start with the plot: a small town in America has been overrun with zombies in stereotypically staid B-movie fashion. I honestly can’t remember if we’re ever told why the shuffle feet are wandering about eating people. I get the feeling it’s not considered all that important in the grand scheme of things.

The whole zombie theme is old hat now, and Trapped Dead : Lockdown brings nothing new to the genre. Stereotypically cardboard NPCs inhabit an isometrically displayed world in which one of five player characters (Marine, Butcher, Exorcist, Marshall and Assassin) hunt for an end objective no one really cares about and I honestly cannot recall (I gave up after the exorcist character, upon realising that the missing priest I was looking for was the spitting image of actor Frank Kelly in his well known guise as “Father Jack Hackett”). 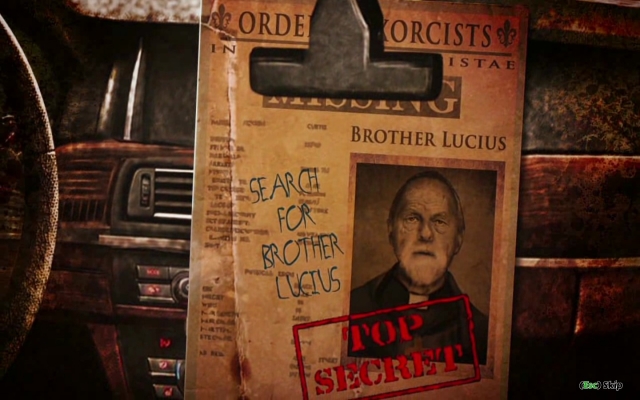 Even the NPC names made me die a little inside. At one point you must free a serial killer from a jail on account of him being the only person who can get you through a gate and on to the next part of this turgid mess. The name of said miscreant? Charlie Ray Hanson! Really, a cheap rip off of Charles “we are family” Manson? I half expected him to start singing “Helter Skelter”. Thankfully, once he has got you through the gate to the radio station a sniper puts a shot through his head.

The multiplayer of this game is a cooperative effort that enables you and up to three friends to attempt to slay you way past undead hordes, bosses that require you to have all the skill and ability of your average cerebrally damaged squirrel to defeat (a hint. keep back and shoot it) and missions from NPCs that are almost entirely along the lines of “go there, get that, come back here” or the ever enthralling “go there, kill x of y, come back” having you grind your way through. 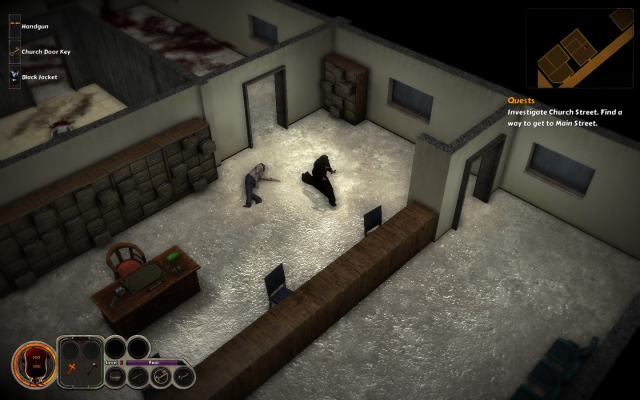 There are a couple of high points to the game, the loot system works well, with more than a nod to the system used in the first two Diablo games with upgrades coming along at a pleasing rate. The skill trees are nicely complex giving a choice between offensive and defensive abilities, and the gore level is appropriate for an action RPG zombie slasher.

However, the AI is atrocious. NPCs and zombies alike seem unable to distinguish between walls and doors resulting in more than one example of me powering off the PC in disgust at just how cloth headed they were. The controls and clunky and lack responsiveness and god help you if you need to change levels in a building by climbing stairs, it’ll take you a good half dozen attempts to get your character to navigate the difficulties of the common or garden stair. Daleks have better luck with climbing the things.The graphics on the whole are woeful. someone apparently thinks that excessive gore and playing on nostalgia with an attempt to look like Fallout in visual style can substitute for polish. They were wrong. 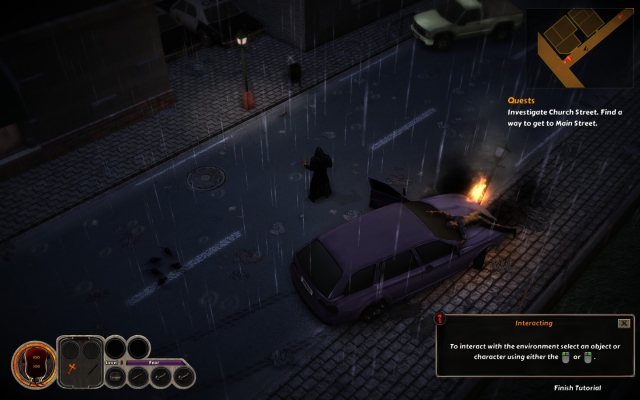 So in summation? This game is BAD. It’s a turgid, badly written, nauseating mess of a game with all the style and grace of a 4am drunk. I wish I could find something else positive to say about this game, but I can’t. There’s honestly not one more positive thing I can think of.

A turgid, badly written, nauseating mess of a game with all the style and grace of a 4am drunk. I wish I could find something positive to say about this game, but I can’t. Do not touch with someone else's barge pole!

This is a pity, I found this game quite appeling when I saw it. I've got the feeling it takes itself too seriously

The game could have got away with it if it had been more tongue in cheek.