New to Xbox, we’re talking about Tricky Towers today. Besides simply releasing on the platform, this title also has a unique mode only found on the console, but more on that later. With its challenging puzzle gameplay, the game has players use tetromino blocks to stack giant towers. Unlike Tetris however, Tricky Towers lets players place pieces in hectic and awkward ways, mostly due to the physics that affect them. These mechanics alone make this game far more difficult than I had expected when I first saw it. Add to this that the entire experience takes on a sort of competitive feel, and you can see how the game would be an obvious choice for puzzle lovers that like to show their skill.

You may be wondering how you make stacking tetrominos competitive, but it’s actually quite simple. In any given mode, the player will be given blocks (random or predetermined) to twist and stack to reach a certain goal. This changes from mode to mode, but the big takeaway is to make your tower the way the game wants. Sometimes this means making a tall stack, while other times it means making the shortest or sturdiest. 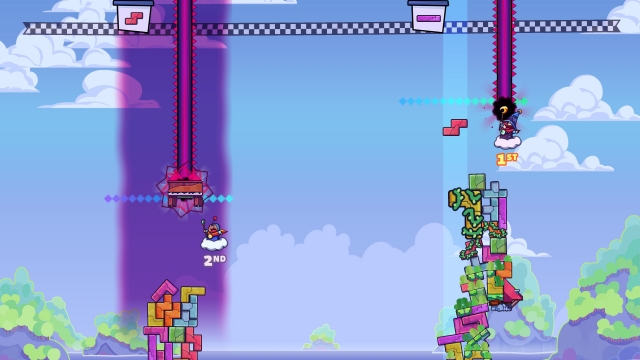 No matter the case, players will often need to keep in mind one other thing: magic. Whether Light or Dark, magic can completely change a match. Some of the effects the magic can have include tying blocks together with vines, covering pieces in shrubs that conceal them, destroying the last tetrimino placed, and embiggening the brick being placed.

There are three modes to keep in mind, each with their own ways to win. There’s Race, Survival, and Puzzle, all of which can be played either alone or in multiplayer. In single player, these modes are available in Trials and Endless Trials variations. In Race, the player will have to reach a certain height requirement in the given time, often being harassed by an opposing mage. The Endless version of this is the unique game mode found only in the Xbox release, which simply has players race against an ever rising fail line in order to see how high they can stack their tower.

Survival requires careful planning and quick wit as the player creates a tower without losing any blocks. For each block (or group of them) lost, a heart is taken away. With only three hearts, it’s easy to see how the Trials version (opposing mage) and Endless Trials version (no mage) can become difficult in a short time. Finally, there’s the Puzzle mode that gives the player a unique base to build off of while staying below the laser that looms above. In the Trials variation, the blocks used to construct the tower are predetermined, so planning is important. The difference in the Endless Trials version is that the laser slowly rises, allowing you to keep building as long as you are careful and make your tower sturdy.

I actually enjoy these modes and the gameplay quite a bit. The gameplay is simple, allowing the mind to figure out the best way to build the required tower. With varied modes and different ways to try them, there is a decent amount of variety. But then there’s my main issue. I’m not completely sure why, but I often noticed the game jittering and forcing my block to shoot down the screen faster than I could react, causing me to fail more levels than I care to count. One of the Survival levels burdens the player with a super speedy descent on several of the blocks they need to place. This stage becomes nearly impossible when the game freaked out and jumped while trying to move around. 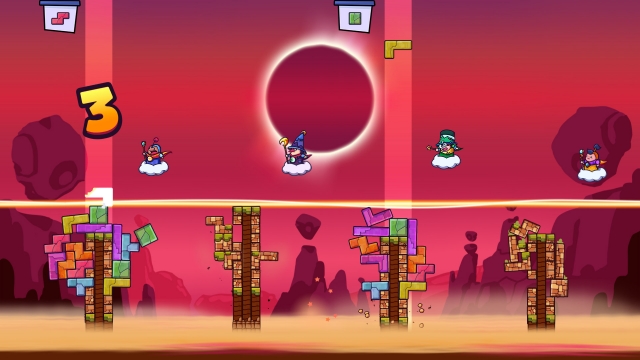 This issue may or may not affect other Xbox players, but it plagued my time with the game and left an awful taste in my mouth. I have a few other gripes that are far less important than a gameplay issue like this, like the fact that there is a “Shop” button on the main menu that takes you to the Xbox Marketplace instead of an in-game one. I felt like this is a bit misleading and will probably annoy quite a few gamers. The slightly larger issue I have is that I’m not sure how much replay value the game will hold after a bit. While the physics are interesting and the core gameplay is fun enough, I just didn’t feel like I really wanted to come back to it all that much.

It’s a shame too, since the game has such a bright, colourful, and endearing feeling to it. Everything from the menu to the characters to the scenery gives off a calm vibe that helps keep the game fun even when it gets tough. This is slightly undercut by the fairly repetitive music, but I still think the art deserves attention. I want to love this game, but in its current state, I can only say I like it.

Tricky Towers (Reviewed on Xbox One)

This title is probably better on the PC where I imagine it runs smoother. How it is now, it makes for a decent puzzle title with an interesting concept that is shackled by an issue that ruins the experience by making easy moves difficult and difficult moves impossible.

Tricky Towers Launches on Xbox One