Tunnel of Doom is a dungeon-crawler roguelite with tower defence elements. The mine is closed because the miners are missing, and the search party hasn’t returned. One woman takes it into her own hands to get in there and help out, not least because her husband is among the lost. The mine is full of monsters, but one of them — by the name of Gar — wants you to assist them in overthrowing the warlord so peace can be attained.

Unfortunately… that’s pretty much the entirety of the story. There are only a handful of story-type interactions you can have with Gar, limited to pretty much once per floor. You don’t even learn the player character’s name until the very end! 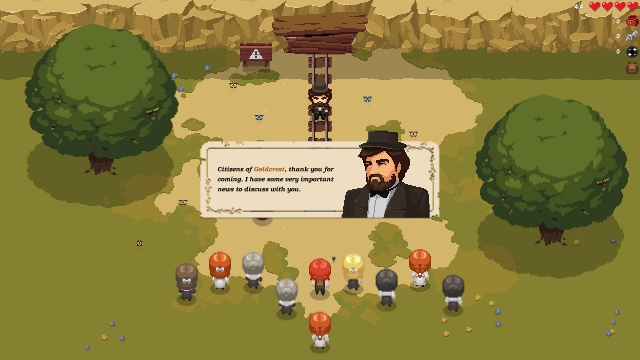 The tutorial helps you get a grip on the game, within only a few rooms. The tower defence style sections give you suggestions on how to set up rooms, although you will only really learn what setups work for you specifically when you can experiment during the main game. One very useful thing that the tutorial doesn’t point out however is the key/legend in the bottom right of the screen; this helps you learn what is a high barrier and what is a low one, as well as how many of each resource you have on you.

Getting around the map is similar to games like Moonlighter and The Binding of Isaac; your current room always takes up the screen, and your character runs around without changing the camera angle. In a similar fashion to the former, you can do a jump roll, allowing you to get across gaps and dodge through enemies and projectiles. All ranged attacks will automatically aim towards the closest enemy in front of the direction you are facing, to account for the fact you can only shoot and move in the cardinal directions.

Any given room has a chance to be a Battle Stage. When you enter one, you will get a full-screen warning, so it’s impossible to not notice. Battle Stages are where the combats happen; you will have as much time as you like to prepare, but you cannot leave the room until it is over, even from the direction you entered from. Red arrows will show you where the enemies will come from, and a list in the top-left corner will show you what enemies are about to try to end your life. Many room layouts will have enemies coming through holes in the floor; if you can keep these covered, then any wave coming from below will be cancelled. 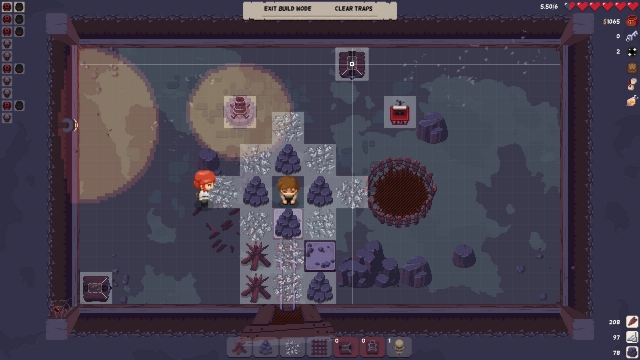 These Battle Stages are the real meat and bones of the gameplay. Strategically routing enemies through light and traps can make things easier for you, and safeguarding any turrets you set up will only help in the long term too. If all else fails, taking on enemies with your own weapons is a course of action you will surely take! Note that Battle stages can also occur in any previously explored room too, although usually with a lower enemy count. Occasionally there will be a living miner that you need to try and protect; if you succeed they will give you extra supplies, but if you fail then you will take an additional heart of damage after the Stage is concluded.

There is a shop on every floor, overseen by Gar. The same things are always for sale for gold; up to one of each turret, and infinite amounts of other consumables. Resources aren’t offered, although you are likely to have more of them than you know what to do with anyway. The last item on sale is a random perk from the 50 available, like the ones you have the choice from at the start.

The graphics are pixel-style, again in the same vein as Moonlighter; it feels to me as if that was a definite inspiration for Tunnel of Doom. It looks good, although fairly samey; this isn’t really much of a surprise given the entirety of the game is set within a single mine, however. Every single enemy, prop, structure, and obstacle is visually distinct, so it’s always easy to tell what you’re looking at. 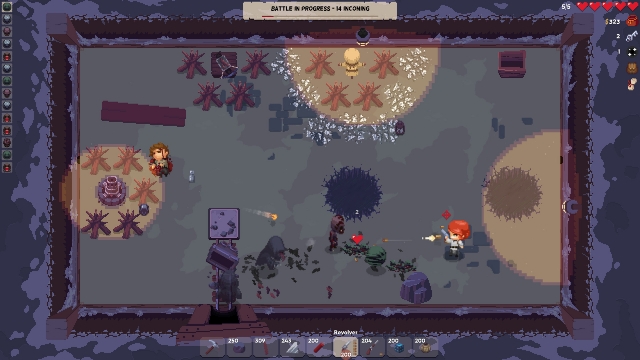 The audio is rather minimal — there are only really three tracks, all of which repeat on a fairly short loop. Each of them does evoke a general sense of what is happening, at least; a more blood-pumping tune for the combat, a suspenseful ditty for the preparation phase, and a mysterious theme for exploration.

Aside from the lacking areas mentioned already, there were two main issues I had with the game. The first was a bug; it only happened once and I have no idea what prompted it to occur, but an enemy was completely immune to damage. Naturally, that forced an end to the run, which was annoying, although luckily it was near the beginning. The second issue is the length of the game. I do have some experience in roguelikes and dungeon crawlers, but I didn’t expect to beat the entire thing with no issues on my first attempt, and in only around two hours. There aren’t any further storylines to explore afterwards either, although your first victory does open up an additional two game modes: Doomed Mode, and Dream Mode. These do solve the issue, but only slightly.

Dream Mode is basically an endurance run. Every room is randomly generated, and there is no real map to speak of. The enemies get more health every 15 rooms you enter, and the enemies in each wave are also totally random from all available throughout the game — including even the final boss! Doomed Mode, on the other hand, is what feels like the “real” game mode. You start with less health; no resources, weapons (apart from pickaxe), or money; and the map doesn’t reveal any information about the rooms until you enter them. It is a significant increase in difficulty over Normal Mode, and felt like a much more enjoyable way to play. 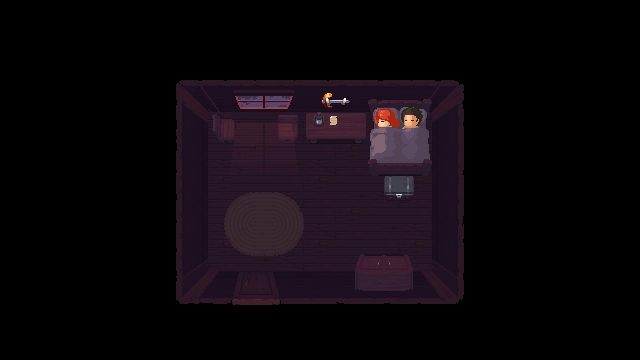 Unfortunately, these additional modes don’t really offer much in the way of increased replayability, which is Tunnel of Doom’s biggest flaw, especially for a roguelite. Every run is the same loop; three floors, with the same enemy types on each floor, and very few random factors (those being available perks, map generation, and amount of resources — with the last being almost negligible). In its current iteration, this is a game that many people will enjoy once and then have little to no reason to pick up again. I really would love to score this higher; it plays well and has promising potential, but sadly there are just not enough positives for the initial release. One can only hope that solo developer Antti Vaihia has more ideas to build on the foundations laid so far.

Tunnel of Doom (Reviewed on Windows)

The gameplay is pretty good, but it is sadly sullied by a lack in all other areas. The story is almost non-existent, the graphics and audio are merely adequate, and there is a definite lack in replayability. A real shame, but there is potential for more in the future.