“Spiritual successors” can come and go in gaming, and they tend to be either a sub-par representation of the original or don’t bring much new to the table, alternatively being an extra layer of polish on the graphics or maybe a bump in resolution. Sometimes, however, a developer really gets it right. Two Point Hospital, developed by Two Point Studios, a new studio setup with names like Mark Webley and Gary Carr at the helm, two developers that were part of Bullfrog when they made Theme Hospital, putting them in a good position for being able to truly deliver the “sequel” that we’ve all been clamouring for. 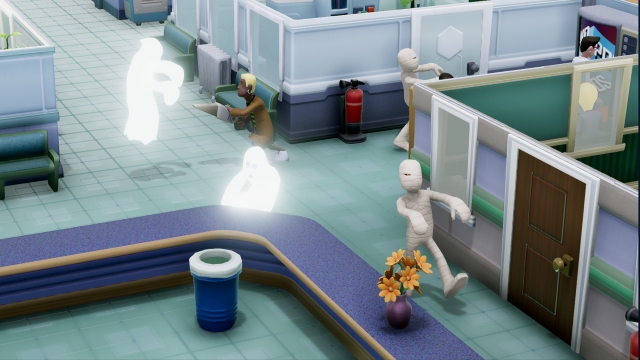 To this day, Theme Hospital still holds up very well in terms of gameplay, but it does look somewhat dated. After all, it is 21 years old at this point. For those that haven’t been exposed to Theme Hospital, Two Point Hospital has you as the hospital administrator, taking care of the building of various rooms and amenities that the hospital requires to function, along with the managing of staff and the finances that come with that challenge. You’ll be diagnosing illnesses, and either successfully (or not) curing them. On the surface, the idea seems pretty simple, however, as you progress through the levels, you start adding more tasks to your managerial side, such as ensuring staff receive training so that they can be both their absolute best at what they’re doing, in turn to increase your hospital rating and therefore attracting more patients - and ultimately - more profit.

Two Point Hospital has its own unique set of ailments that need cures, ensuring that you’re always kept on your toes in terms of making sure you have the relevant rooms available to accurately diagnose and cure the diseases. To not spoil any of the fun of discovering them for yourself, there’s no descriptions of the ailments here. 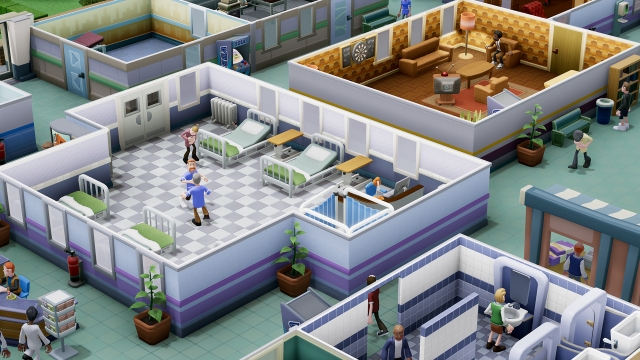 Whilst there’s plenty of nods to Theme Hospital throughout, there are also a good chunk of new gameplay elements that mark an improvement to the management game. Most notably, rooms are no longer confined to square/rectangle boxes, instead, you can branch out and have L shaped offices, or give your wards a unique area for their reception desks. You also need to be more ahead of the game when it comes to expanding your hospital into a new plot of land, as it’s no longer granted to you instantly, instead, you have to wait for the land to be developed before you can move in. When you’re faced with an emergency epidemic, and need new rooms to deal with it, this places you in the predicament of whether you can get away with waiting for new land to become available to dump all your rooms into - or do you turn the patients away, risking potentially good income and reputation?

As per the original you still need to ensure that there’s plenty of seating in the hospital so people aren’t standing around, and that there’s plenty for them to do to stop them getting bored whilst they wait. Staff will require a staff room that they can goto to take their breaks. In a slight deviation from the original however, you will need to unlock items that are more beneficial to your hospital by earning “Kudosh”. This is an alternative currency, that allows you to unlock things like different coloured benches so that you can theme your hospital. To things like a newsagent or arcade machine that staff and patients can use to alleviate boredom whilst they wait to be seen to. I quite welcome the change in this regard to not having everything available from the get-go, as it gives you the opportunity to think about the items that your hospital needs, and gives you a better chance to learn what they will do in the hospital, rather than being something that you can just dump down from the start of the game and not really understand their benefits. 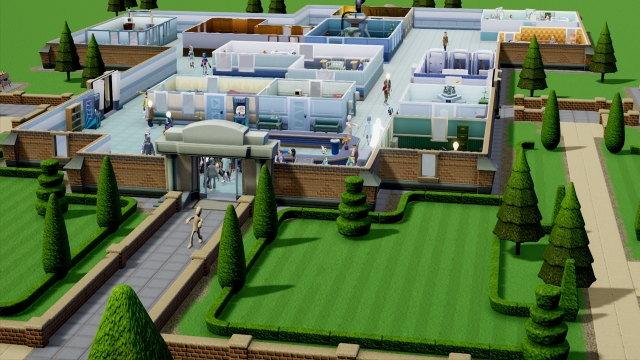 Each hospital you run can be upgraded to a three Star Rating, which requires you to meet certain goals along the way. You’ll only need to unlock the first star to be able to move onto the next hospital, but the flipside is that with the additional Star Ratings you unlock, you’ll earn more money and Kudosh. That additional Kudosh can be used to unlock items to make your next hospital even better than it would have been if you’d just moved on straight away. You can still return to your previous hospitals at any time to get them up to a three Star Rating, but your subsequent hospitals will suffer in their potential abilities in the interim.

One of the big differences between now and 21 years ago, is that the Internet has become much more prevalent in everyday communications - and this bleeds into Two Point Hospital beautifully. Alongside the challenges to continue through the game, you’ll also see challenges from your friends showing various tasks they’ve completed, how well they did - and allow you to take on their scores to be the top hospital manager going. It adds another dimension to the thought of competing hospitals in the area - you’re not competing against some randomly generated numbers from an AI hospital, instead, you’re against another, real, human-being. This really ups the ante in terms of competitiveness. So much so that at one point, I built a massive training room with an excessive amount of desks, hired as many staff as I could with an open training spot, and sent them all in to learn a common trait in order to be top of the leaderboard. I’d already reached my three Star Rating for that hospital too, so I’d continued when I didn’t really need to, just to ensure I was top... 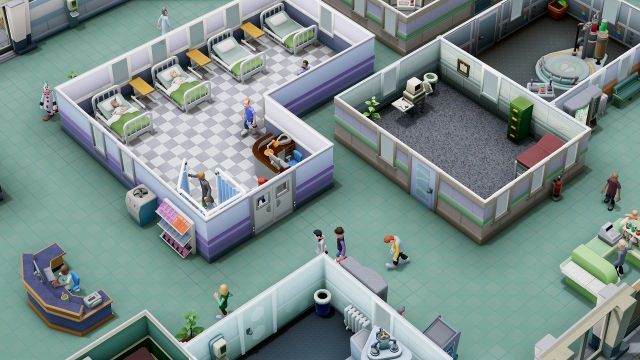 Whilst I imagine that the “Two Point” part of the name is something of a clever way of calling it Theme Hospital 2, without actually calling it that, it feels like it's doing the game a disservice to only think of it as a sequel to Theme Hospital, when in actual fact, it’s much more than that.
Overall, Two Point Hospital is the exact game I’ve been looking for as a successor to Theme Hospital for all these years. If you’ve ever played and enjoyed the original, then this should absolutely be on your list of games to have. If you haven’t ever played Theme Hospital, but still enjoy management games, then this should still be on your list of games to have. If you take away the nostalgia from the title and look at it on its own merits, you still have a solid management game.

Categorically the best “spiritual successor” to anything I’ve seen in quite a while. Takes a beloved franchise and brings it smack up to date with features and gameplay elements that fit in the modern landscape of gaming. It isn’t diagnosed with a case of microtransaction-itis either. Just clean, sterilised fun.

I need to put more time into this game, I played the first level to max stars and just haven't gone back for the other levels - I'm missing so much!

Whatever you're doing. Right now. Stop it. And go play Two Point some more.

If only it were that simple!

I was sceptial that the lightning could be bottled twice, but this looks amazing.

I really need to get this

So refreshing to have such a well made sim that's not reliant on microtransactions.