Personally, I would forgive you for not knowing about Unit 4 before now. Even after reading about the game on the Xbox Store, I wasn’t entirely sure what to expect from this indie title. The given description gives a long explanation covering various elements such as the plot, heroes, and gameplay. Boiling it down to the most important bits leaves us with an evil alien army going around and stealing sacred artifacts needed to hold their respective planets together. I also thought the line “ultimate old-school platforming mayhem” was interesting as it promises something I was sure to look out for once I booted it up. Near the bottom, I noticed a list of several other promises that I became more and more skeptical about as I read them, but more on them later.

“Give credit where it’s due” is one of my personal mantras that keeps me objective when I review games. To this end, I would like to mention that Unit 4 using four different and interchangeable heroes is interesting and has plenty of potential in my eyes. Each of these characters is visually different (build, details, and color) while also having unique powers. Our blue hero has the power to double jump and stick to walls and is the most plain looking character of the bunch. The much larger red hero can dash a short distance while damaging or pushing anything in his path (enemies or scenery). Next is the sly green hero with his grappling hook that can be used to either stick to surfaces or defeat enemies. Finally, we have the mysterious yellow hero that can turn into a ghost to do a variety of things from floating to possessing enemies. 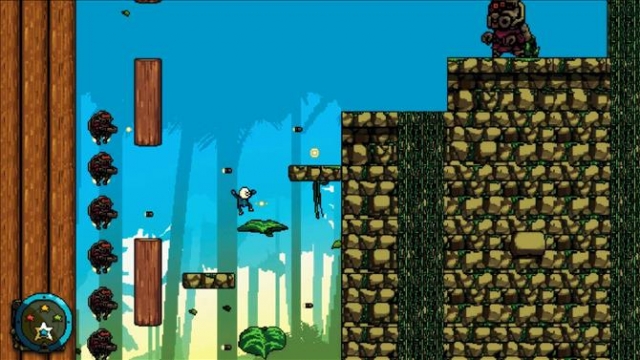 How these powers are used in the gameplay varies greatly as much of the retro platforming can be addressed in several different ways. For example, a section may have multiple platforms to jump between and two ground enemies in the way. In this instance, the blue and yellow heroes could use their respective powers to pass by the danger, while red and green heroes may take out the danger with their powers before moving on. This kind of choice is wonderful and is the cornerstone of what makes this game appealing. Luckily, players will have several chances to use all the different powers through the retro style levels the game has to offer. Everything in Unit 4 feels like it was ripped out of a much older title while making jokes and references about several other titles.

After futilely trying to ‘enable co-op’ in the game's first two levels, I was informed I was going about it the wrong way. Shortly after this revelation, I decided to try the levels I was having trouble on earlier. With a friend playing by my side, things went far better and I found myself laughing about our many deaths together. I still didn't find myself enjoying the game so much as the nonsense that my friend and I got into. Admittedly, with the co-op functioning, Unit 4 made for a much more engaging game. With that said, I still had some issues. Sticking to walls happens all the time, but dismounting usually lead to death. I found myself dashing through one enemy only to run into another once my dash had ended. I could barely aim the grappling hook since it picks up on the tiniest change on the stick. In fact, the yellow hero is the only one that didn’t disappoint me time and time again. Since death is brought on by a single touch, making a mistake means starting from the last checkpoint (unless in co-op). These checkpoints are a godsend since it took me nearly twenty minutes to finish each level on my own. This is without any exploration (not that I saw much to explore besides other paths) as I was far too worried I would die and have to recomplete a section even more than I already had. This is made much less frustrating with a co-op partner (or three). Having long levels is totally fine when it feels fair and is fun to play. Unfortunately, I have to report that Unit 4 pulls some dirty tricks to keep players replaying portions of levels that should be simple. The best example I have of this was when I used the red hero to break a large ice block only to find out it had spikes underneath it, which killed me instantly. Besides moments like this, the main boss I encountered was simply a test of memory as it became too fast to beat with reflex. The fight wasn’t that hard (hit the weak spot three times), but remembering where to be and when was frustrating and fairly boring.

I don’t mean to sound so negative about this game, but I believe I know what the true problem is. While Unit 4 has the old-school looks and sound down, it also brings the issues these retro games had. I’m all for a difficult game, but it is only acceptable when the game is difficult because it requires skill, not because the player is asked to perform tasks on the analog stick instead of the D-pad. The inclusion of co-op is probably its one huge saving grace. Simply because of its addition, I was able to replay several levels having far more fun than I did the first time through. If it simply weren't for the boring boss and the obnoxious way the characters just barely fall to their death, I would be able to give the game an even higher score. I can see what Unit 4 wanted to be, but I have to say that it just barely misses the mark due to these issues.

Unit 4 (Reviewed on Xbox One)

While Unit 4 has some really neat ideas, it barely misses the mark and will probably only attract nostalgia from diehard retro fans. In its current state, all the polish in the world wouldn't address the key issues I have with this title. To put it simply, this game's co-op isn't a big enough change from the retro titles it draws inspiration from.

So you put 5 on 10 because you didn't be able to play coop and you need d-pad to play a game in 2017? To play coop you have just to turn a second gamepad on man. Then jump in. Controls are always been ok and the only problem is the camera that a couple of times should bring an unfair death (but you can use Blue sliding on walls to avoid problems). It is a good Platform

Hey Elric, thanks for the comment! I'm sorry to say the issues I had with the game were enough to ruin my time with it. After I saw your comment, I tried to get co-op working yet again and it would not recognize a second player. It's a shame because I could see the game being a lot more fun with a partner to run around with. About the whole D-pad thing, it goes beyond being a personal preference as I know several people who have had issues with analog sticks not being as responsive as the trusty old D-pad. I decided to talk about this since it killed me more than several of the enemies did. I agree that Unit 4 could be a great platformer if it shook off the old tropes holding it back, but I stand by my current review of it. Thank you again for your feedback and I hope you enjoy my future reviews and articles!

Don't get the point when you say "the game don't recognize a second player". If you connect a pad (or 3 more) the UI pops-up in the space map in the top right corner along with the landing option. And then it is on the same spot in the world map. The only thing that you can't do is joining a session without going back to the world map or on the galaxy map. But it works properly (even if the choice to forbid to other players to join on the way could be disappointing). Got the point on the D-pad but can't be the greatest problem of the game. Camera is the worst in some points. Colliders were too but seems everything has been fixed recently (playing the game on Steam that had other problems too but nothing dramatic). Too low with the score, you wrote basically what other people wrote hitting 8/10 or 7/10 (which is the right score IMHO)

Hey Elric. After checking on what you posted, I have edited my review and score to better reflect my new experience. Thank you for helping me better my review. It's a shame the option for co-op is in such a strange place and can only be used once a world has been selected. I had tried on the title screen, in the ship, on the map screen (without a world selected) and while in the level, so I simply overlooked the prompt. I apologize for the confusion and hope that my new review seems more fair to you. Either way, thanks for the comments!

Hey man, i personally think taking a step back and going to check things when underlined in a simple comment is a great way of making good journalism. Yep the coop feature is weird but it is in place and sometime making mistakes happens. I play the game in coop and it is actually good. The most important thing is that a lot of small studioa updates their games following feed from press and users and i think this is another point to take into account when reviewing a product. Thanks for the chat!

And I appreciate your civility. Many people get so up in arms about games they enjoy that they don't see that mistakes can happen and that plenty of people like myself will do everything we can to correct them. Again, I apologize for the confusion and thank you for all the support you give to the site. Hope to see you in the comments of my future articles!