In Something of a hat trick, three of Japan’s visionary game developers - Hideo Kojima, Yu Suzuki, and Keita Takahashi - have released long-awaited games at the end of this year. The latter’s been the one we’ve waited the longest for since it was first publicly announced as a PS4 exclusive at 2014’s PlayStation Experience five years ago. It was later dropped but picked back up by the best indie publisher Annapurna Interactive, now also releasing it on PC. It’s also the one that you can finish over the course of an afternoon. Yet despite its brief length, it’s one of the silliest and most joyous games you could ask for to pick you back up at the end of a pretty miserable year.

Wattam has all the developer’s weird and whimsical charms we’ve known and loved since his debut Katamari Damacy 15 years ago, albeit without a central gameplay hook like rolling up a whole town’s worth of things. Wattam is broader, and though made up of a series of simple tasks, it’s also more explicit in its storytelling, one that underneath all the infant-friendly aesthetics and baby noises begins on a rather dark note. 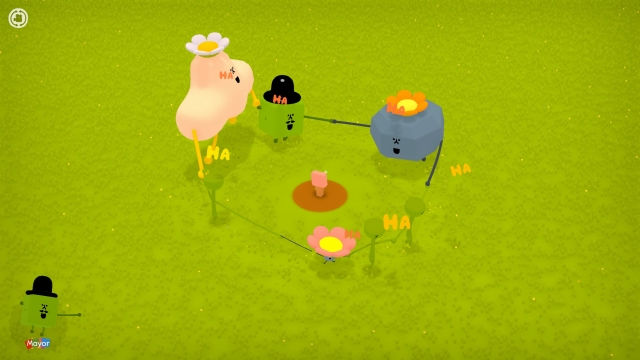 After some kind of cataclysmic event has left the world empty, you begin as Mayor, a green cube sporting a moustache and a bowler hat, crying all by himself. Tears are something of a recurring theme in Wattam as you soon encounter other unhappy characters with their own problems. It’s not quite the tone you’d expect from the creator of Katamari Damacy or Noby Noby Boy, and yet it’s by having you begin at rock bottom that you can eventually pull yourself back up.

As Mayor, you’re soon befriending other anthropomorphic characters with the same basic face doodled on their front and pencil-thin limbs. You can also take control of your new friends. Sometimes making use of their own unique abilities, sometimes scaling them up or down. So you’ll also come across huge rubber ducks or desks that can transport your pals from one island to another, or maybe take control of an acorn that transforms into a huge tree that also eats things turning them into fruit. 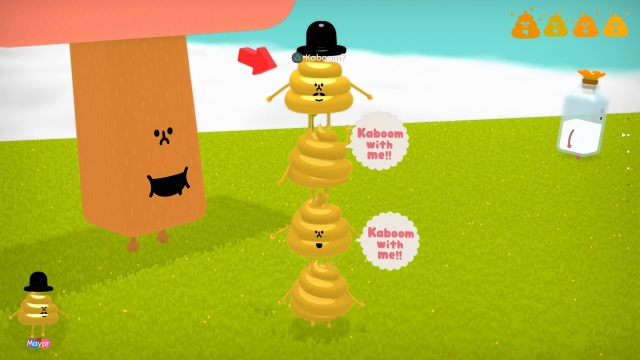 It’s like happening across a kid’s toy box and then dumping it all into a sandbox, even though there’s still quite a linear objective to follow. But of course, nothing’s stopping you from just having a chill time joining hands, climbing on top of each other into ridiculous towers, or just exploding with your new-found friends.

Of all the weird features that might seem incidental or get used for one puzzle, the bomb is as close as you can get to a core mechanic in Wattam despite still not being all that vital. Instead of being typically destructive, it becomes a force for joy as your friends all excitedly shout to be a part of the ‘kaboom’, which sends them into the sky, flying around like they’re on a theme park ride. Does it make any sense? Not really. Is it fun? Heck yeah!

It’s not easy to describe the many surreal moments in Wattam without spoiling anything, although it has some surprising similarities to Death Stranding, what with its post-apocalyptic premise, the central theme of reconnecting the world, as well as a preoccupation with pooping and explosions. There’s no BBs but then the world is basically designed like something that can be enjoyed by babies so I’m hardly stretching the comparison. The major difference is its uplifting message is one that you’ll only need a few hours of your time to appreciate and it doesn’t outstay its welcome. 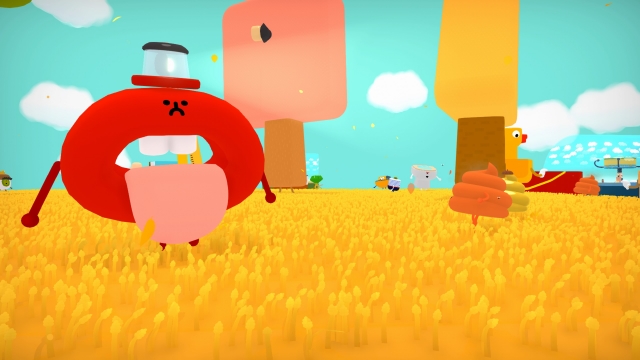 I’m still not entirely sure what about Wattam made it take five years to complete - it certainly wasn’t for polishing as it’s riddled with some unfortunate technical hitches like framerate drops and an archaic camera system that uses the shoulder buttons rather than the right stick (that’s instead used for switching characters, which is similarly unwieldy). But spend a few hours winding down with its carefree sandbox or just listen to the ever catchy folksy music, and it’s just the antidote you need after a bad day, a bad year, or hell, a bad decade.

Spend a few hours winding down with its carefree sandbox or just listen to the ever catchy folksy music, and it’s just the antidote you need after a bad day, a bad year, or hell, a bad decade.