Developer and publisher 10tons have recently been making the Nintendo Switch home for a large number of their games. With Xenoraid, one of the latest titles to join the rest of the gang on this new hardware, players will be jumping into an intense battle for Earth's survival. Though each title on the console is welcome I couldn’t help but enter this title with a bit of reluctance but after spending time with it, I’m happy to say this Xenoraid is a appreciated addition.

This scrolling shooter takes a few steps away from the usual gameplay formula and brings in some refreshing elements. One of these is the requirement to defeat every enemy in order to progress to the next stage. In most games of this genre you are given a lower score for each enemy you leave alive. In Xenoraid, the need to remove them all adds that extra sense of pressure which in turn fuels the adrenaline rush. Seeing a group of enemies swing back around for another attack makes for stand out moments as you chip away at their shields and land that killing blow. Defeating all the enemies before moving onto the next stage also helps aid the game’s roguelike aspect as well.

Each of the titles short campaigns are completely independent to one another meaning none of the upgrades or ships carry across the different campaigns. This means you need to invest the credits you earn accordingly and build the ideal team of ships to tackle the challenges you will face in that campaign. Each of these are also accompanied by a healthy portion of story that never feels like it hangs around for too long. There is enough here to give you a reason to fight and help understand the game’s world but it will never stop you from enjoying the action of each of the missions. Once you reach the end of a campaign you will have to deal with a boss battle which will prove to be a challenge regardless of how your ships are doing. 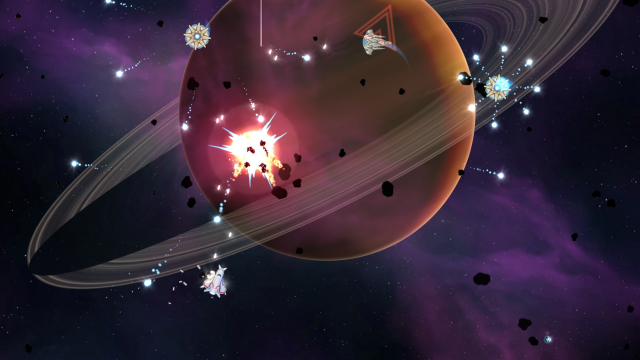 Xenoraid also does a good job of managing the difficulty of the stages throughout the different campaigns. As there are checkpoints after a few stages you never feel like you have completely lost when you suffer a death but at the same time, will feel a great sense of victory when you overcome a challenging section. The missions are procedurally driven but as much above, you fight enemies in waves meaning you are never in a situation you cannot manage. The screen may become filled with bullets, enemies and objects that can hurt you but you will never be without an option.

By far the most prominent feature of Xenoraid is the ability to switch between one of four ships during the heat of combat. Functionally this is a replacement for lives or an overall health meter and further supports the roguelike side of the game. As each ship is independent of each other it means that should one fall in battle you will lose all upgrades and need to purchase a new, entry level ship. Managing your ships and when to use them in the heat of battle is key to ensuring you survive even the most intense firefights. As you progress through the game you will unlock new types of passive abilities and ship types, granting you even more firepower and chances to win.

The ship switching also creates unique gameplay moments that help to stand Xenoraid out from other titles. For example, you can use the movement to avoid damage for a brief moment and even reposition yourself. When the screen fills up more mastering this move will be key to ensuring you are able to complete a mission. Combine this with the different weapons, abilities and ships that Xenoraid gives you and you’ll find a scrolling shooter that has a wide range of depth to its mechanics. Once more, the title is actually very accessible and though it can be challenging ensures that players are eased into the action and have all the information they need. 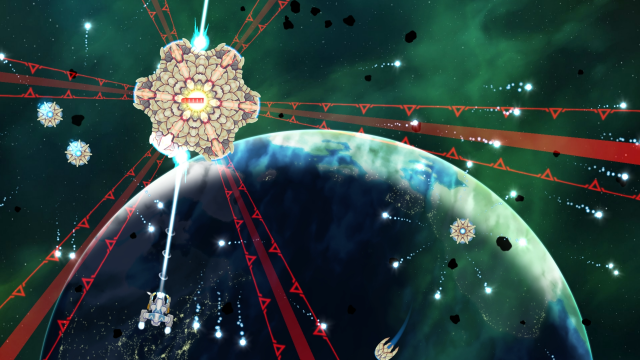 Visually, the game has a strong presentation both in handheld and TV mode. The Switch continuously runs the game at a steady framerate in both configurations that results in a pleasant gaming experience. One of the strongest parts of the visual design are the explosions that light up the screen and never got old after countless waves of enemies. Throw in the strong sound design and music choice and you have a title that is polished and refined that feels right at home on the Switch.

Xenoraid is an interesting title. Not only does it bring some new ideas to the genre it represents but it also refines those it is using to give a robust result. With a good amount of content to be found in the story with a co-op and survival mode included, players will be happy with how much time they can get out of this game. If you are looking for a scrolling shooter that feels tight and responsive to play with plenty of roguelike options, then this is one for you.

Xenoraid is a solid and enjoyable scrolling shooter that feels tight and responsive to play with plenty of roguelike options and content throughout. If you are looking for your next Nintendo Switch purchase, this may be it. 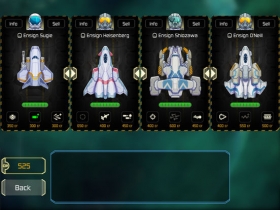