Zombie Tycoon 2 - What doesn't sound awesome about that? Being a huge fan of pretty much every game ever released which ends in the word Tycoon, as well as a long time lover of anything involving zombies, I was really excited to get my hands on this. However, don't be confused by the title as this is in no way a Tycoon game in the vein of RollerCoaster Tycoon or similar. Zombie Tycoon 2 is a real-time strategy game with the story playing over chapter-based levels, interspersed with cutscenes.

In the game you take control of Tycoon, a gas masked mad scientist, and his army of zombies. It plays out in chapters, as you would expect, with the first couple showing you how to play. There are buildings to capture, zombies to discover and an army to build. However, you do not appear to build armies from putting down camps Warcraft III style but by spitting them out of the back of a parked RV. That's right Breaking Bad fans, yet another unconventional use of a humble RV. 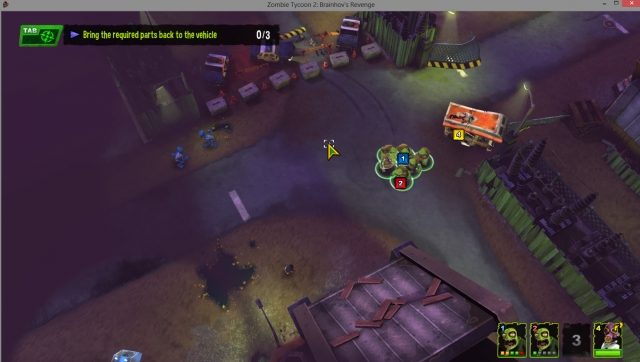 As you progress you can capture more buildings and these give you access to more zombies. Send the zombies into the buildings and they will come out as different classes. Your basic melee units are the brawlers, which are tough and deal decent melee damage, and the Samurai which are quicker but can't take as many hits. On top of these you have utility units which consist of Engineers, who capture buildings and Cleaners, who can mop up toxic spills as well as leave some of their own. You can also find Scavengers, the garbage-flinging ranged units and Scout zombies to spy on your enemies.

Through the chapters you are also given control of some monster units which give greater powers. I really loved Braintrust in particular, a sort of PC on stilts who has the meanest ray gun you have ever seen.

You start each chapter with a limited number of units. As you progress through the objectives you can grow your troops by discovery and capture. You then have to take your amassed army of zombies and complete the goals given in each chapter. As you progress you will also be able to open chapter which allow you to take control of the “other side” of the zombie faction who have units with very similar abilities. 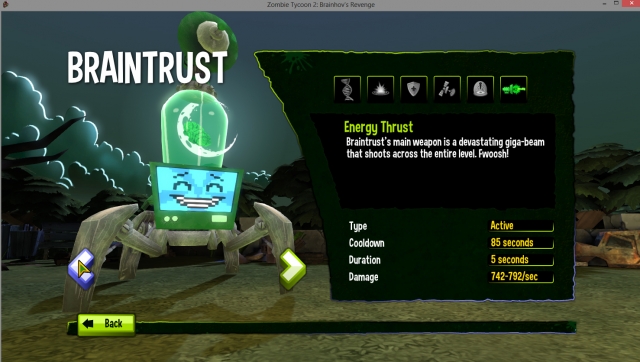 The graphics for Zombie Tycoon 2 are all done in cartoon style which works really well. It has a cheesy feel which I think works well for the play-style. You can tell that this game is not meant to be taken seriously which is evident in the fact that the first boss-type creature you encounter is a rabid, psychotic badger. The soundtrack is also in keeping with the style of the game, being fairly cheesy but mostly fitting well.

Overall I did enjoy Zombie Tycoon 2 but I do feel it could have done with more polish and direction. It is fun for a while but I cannot see myself putting in the hours needed to complete it. The fact that the chapters seem to suddenly ramp up hugely in difficulty around chapter 4 doesn't help. I will admit that I am out of practice a little at this type of RTS (preferring the build an army, Command & Conquer type games) but when it suddenly got very difficult I am afraid I got very bored.

I tend to get frustrated when a game, which is challenging but fun, suddenly hits a wall and you face instant game over so fast you have no clue what went wrong. The middle chapter felt like this to me. I was doing fine until suddenly a challenge hit me where all my zombies were obliterated in under 90 seconds and I could not figure out why. If I can’t work it out after a few attempts I tend to get frustrated and then things get thrown and it all ends very badly. A more experienced player of this type of strategy game would likely fair much better but that level of difficulty ramp up is a game over for me. 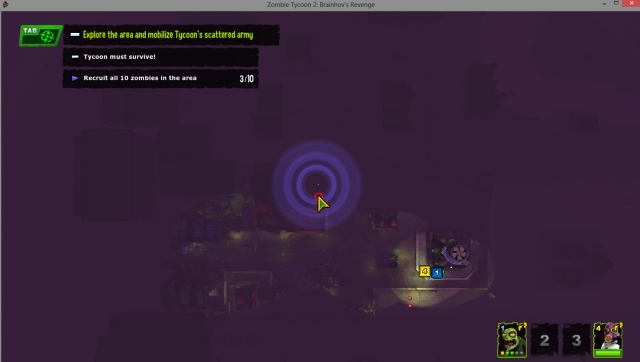 I love the cartoon style, the rabid badger and walking PC screen are inspired but the story element is lacking a little. It can also be difficult to figure out which way you need to go. There are arrows but in a lot of places things like wonky kerbs block off paths you think you can take.

I would happily while away a few hours killing zombies on this but it is definitely not one for the long term for me. I think there is a lot of untapped potential in this game and I would have liked to have seen the difficulty scale better. I also wanted more control over spawning units.  However, if you like your strategy games to be crazy, cartoony and don't mind the jump in difficulty it is worth a blast.

I would happily while away a few hours killing zombies on this but it is definitely not one for the long term for me. I think there is a lot of untapped potential in this game and I would have liked to have seen the difficulty scale better. I also wanted more control over spawning units. However, if you like your strategy games to be crazy, cartoony and don't mind the jump in difficulty it is worth a blast.

Writer of randomness and maker of films Helen AKA Jetgirl lives with her hubby and 3 kids who support her gaming habit.