30th Anniversary of the Super Nintendo

It’s amazing how fast time goes by, how is it possible that it has already been 30 years since the Super Nintendo made its debut? Back in 1990, the Super Famicom was released in Japan and South Korea, to be followed by the SNES a year later. This 16-bit system was not the first to be released, the TurboGrafx-16 was released over three years earlier. Despite its late release date, the Super Famicom went on to become the best selling console, even with tough competitors like the Sega Genesis.

If you were like me and started gaming on the original Nintendo, jumping from 8-to a 16-bit system was a big change. Not only were the graphics significantly better, but the music was great, I still have game soundtracks from Super Nintendo games in my car. Nintendo had also integrated enhanced chips like the Super FX chip right into the cart. There were a variety of chips used that would do different things like make the AI in the game smarter, allow for cool wireframe effects, let the game have a real time clock and the Super FX, which acts like a graphics accelerator program that allowed for creation of games like Star Fox and Stunt Race FX. 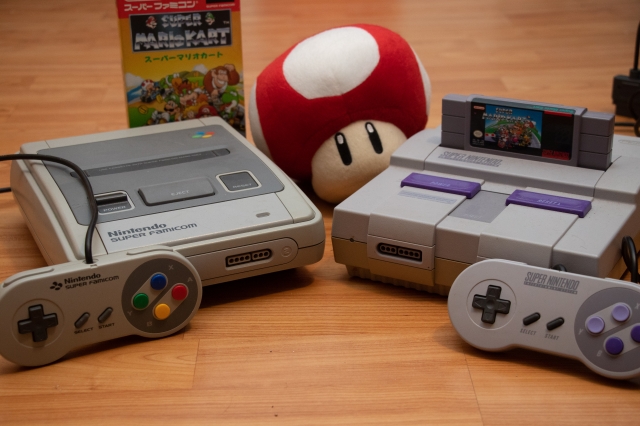 My Super Famicom and my original yellowed Super Nintendo

When I was a kid, my brother and I wanted to get the Super Nintendo so bad. The deal with my parents was that we sold our NES along with all the games (we had almost 100 at that point) and use the money towards the SNES. Years later I regret selling all those classic NES games, some were quite expensive when I rebought them for my collection now. So after selling all that, and a lot of chores, we got our hands on this incredible machine. It wasn’t until I was in my 20s did I become interested in import gaming and got the Super Famicom version. Visually the main difference is the lack of the purple power and reset buttons on the console, then the button colours on the controllers, red, yellow, green and blue on the Super Famicom versus the light and dark purple on the SNES. The carts themselves are slightly different, preventing you from playing Super Nintendo games on your Super Famicom, but since the Super Famicom carts aren’t as long, there are some tricks to get it working on the North American SNES.

The thing that makes the Super Nintendo one of my favourite consoles of all time is the library of games, there were 1757 titles in total over all the different regions. 1,448 in Japan, 521 in Europe, 717 in North America (plus four championship cartridges), 231 on Satellaview, and 13 on Sufami Turbo. Almost all of your favourite game franchises on the original Nintendo are continued here, looking and sounding better than ever. The console itself was shipped with Super Mario World, which is a great addition to the line of Mario games started on the NES. The game was still a 2D platformer, but added an awesome new character, Yoshi. The first time you hit an item block and get an egg is very confusing, but then the egg hatches and you get an awesome dinosaur that you can ride. It was cool how the colour of the koopa shells that Yoshi eats gives him a super power like flight, fireballs or invincibility. There are hidden roads in this game that load a ninth “Special” world to play, that adds something new to unlock if you want to spend the time. It wasn’t required to finish the game, but if you love Super Mario World, you had to play more unique levels. 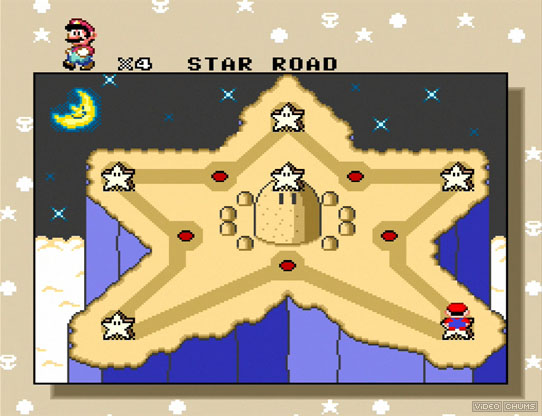 The SNES was not only home to a ton of great platforming games like Mega Man X, and Donkey Kong Country, but it featured a ton of great role playing games. Personally, I put hundreds of hours into the different RPGs, especially Final Fantasy III (6), Super Mario RPG and Chrono Trigger. There was so much here to love, not only did these games have great stories and characters, the music and visuals would just draw you in. I will always remember the intro to Final Fantasy III where you see characters in the Magitek armour marching through a snowstorm, not only on a 2D plane, but walking away from you. If RPGs weren’t your thing, there were tons of other options available like sports games (NHL ‘95 I’m looking at you), shoot ‘em ups, fighting games like Street Fighter II and a censored Mortal Kombat, racing games including the awesome F-Zero and one of my favourite multiplayer games, Super Mario Kart.

There were a few super unique peripherals created to use with the system. The Super Scope was a huge bazooka-like gun that would rest on your shoulder, there was a scope to look through and a sensor that would plug into the console itself and sit on the top of the TV. This was so much fun to use, though it did take a ton of batteries, but nothing beats the feeling of taking out opponents in games like Metal Combat or blasting rockets going across the screen. Though I have to say Yoshi’s Safari was an odd addition to the line up, definitely wasn’t my favourite. The downside of using the Super Scope was the neck and shoulder pain that would develop after a long gaming session. The other notable peripheral was the mouse and pad that was released with Mario Paint. Mario Paint was definitely a unique “game”, but I feel where it really shines is with the music creator. Even if you don’t know much about making music you could come up with some super catchy or really funny tunes. If you go on YouTube and search for "Mario Paint" music, you will find a lot of amazing songs people have created. The only other game that I know of that used the mouse and pad was Mario & Wario, a puzzle game for the Super Famicom, that is the only Mario game to not be released overseas. Which is really too bad, since you don’t need to know Japanese to play it and it would have been nice for people who owned the mouse to have another game to enjoy with it. I still have the box for my SNES, came with F-Zero and Super Mario All-Stars

To this day even though there have been numerous new consoles, Nintendo and others, I always find myself drawn to play the games on my Super Nintendo. Personally I find that the 16-bit sprites still look great and don’t age poorly like the visuals on some of the newer consoles like the Nintendo 64 or the first PlayStation. They still look great and aren’t distracting when you go back to play them. With sprite characters, since they aren’t super realistic, I find it easier to picture myself in the game as a character if I’m playing one of the RPGs. With newer games and very well defined characters, it is a lot harder to do. I feel the SNES is the perfect console, it can definitely be nostalgia, but I think a lot of people would agree. I know one thing, the Super Nintendo was built very well and mine are still working great so I expect a lot more years of gaming ahead. With that many titles there are a ton of games left to explore, and playing the SNES takes me back to a simpler time when there weren't bills to pay, no real responsibilities and I had a ton of time for gaming. Happy 30th anniversary Super Nintendo, thanks for all the great memories and for all the great games I still have to play!

Thirty years, eh? Time flies. To this day, the SNES is my favourite Nintendo console.

The SNES was such an awesome system! It's one of my favourites too!

Great read, I still have my original SNES, that has a hole in one corner where the plastic took a decent knock, and the marking of double sided sticky tape where it and the power supply where held in place in a draw. I've sold most of my games to allow them to sit in collector's collections, as I wasn't using them and I wanted them to have good homes.

I remember our family getting the Super Nintendo, and also have very fond memories of playing Super Nintendo games with the family. Pretty sure I still have a bazooka-rest shaped dint in my shoulder from the Super Scope, too.