A Look Back at the Last Console Generation

It’s with heavy hearts and distressingly light wallets that we wave goodbye to the previous console generation and beckon for the next to take its place. The dawn of any new console generation brings with it excitement, possibilities and endless potential, but it also invites a period of reflection. What defined the last generation? How did it stand apart? How will it be remembered? Let’s look back.

The PlayStation 4 and Xbox One both launched around seven years ago, in November 2013. It’s almost a cliché to point out, but in the gaming industry, seven years may as well be eons. Seven years is long enough for once unstoppable gaming empires to lose their spark and fade into irrelevance, if not outright crumble entirely. Conversely, it’s also long enough for no-names to become household names, for companies and individuals to become blessed with untold admiration and success. Seven years is a long time and a lot can change within it, for better or for worse.

Funnily enough, this console generation coincided with, and almost certainly helped foster, a surge in the popularity of people not playing games at all, but rather watching others play them. There’s no way that livestreaming, and streamers themselves, won’t be looked back upon as part of this gaming generation’s identity. While videogame livestreams were entertaining folks well before 2013, these recent years have seen their popularity reach new heights. Really, it can’t be understated how popular streaming is now when compared to the start of this generation. According to twitchtracker.com, the number of concurrent users has grown pretty much ten-fold since 2013. Among swathes of many demographics (i.e. maybe not your grandparents), it’s cutting into—perhaps replacing—time that would have previously been reserved for TV. 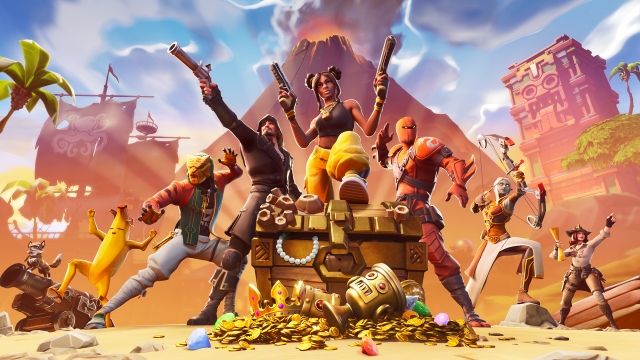 Never before have so many games been designed like living, breathing organisms that continually grow and change. This has not only helped countless games this generation stick around in the public consciousness for longer, but it’s also given some titles another chance at success (Rainbow Six Siege being one notable example). While modding and various community efforts had already given PC games considerable staying power, console gamers are now able to enjoy the benefits of games that keep going (and growing) with more content, modes and all-out overhauls over the years. Destiny, Rainbow Six Siege, Warframe, Rocket League and of course Fortnite stand out as major examples of this, but there are plenty more. This generation, games ceased being static; they came alive.

The Erosion of Platform Barriers

I use the word “erosion” because the barriers between platforms do, sadly, still exist. Despite this, there’s no denying the progress that has been made this generation in terms of connecting players from varying platforms and, more recently, even across different generations. Sony appeared to be the most steadfast defender of the ‘old ways’, but even the mighty folks at PlayStation couldn’t hold out against the pressure of industry juggernauts like Microsoft and Epic Games, both of which championed cross-platform integration as a necessary next step in the progression of the games industry. Much to gamers’ delight, their efforts paid off! Now, Xbox veterans can go head-to-head against their PlayStation rivals in Call of Duty: Warzone’s Gulag; PC adventurers can continue their Genshin Impact journeys in bed on their smartphones; and clueless parents on their tablets can enjoy their first lessons in Minecraft from their intimidatingly knowledgeable children on the Switch. All these stories—and a thousand more—are only possible thanks to the strides made this generation towards an industry without platform barriers. We aren’t there yet, but we’ve never been closer.

It’s not just a ‘gaming’ thing; physical media in general is quickly becoming something exclusively for collectors, resellers or preservationist types who—perhaps rightfully—can’t abide the lack of permanence that comes with digital goods. This console generation, though, that trend kicked into high gear for videogames (non-PC videogames that is; thanks to Steam, physical PC games have been redundant for years). The idea of having an entire game library ready to go at the press of a button, the promise of freedom from game case clutter and the temptation of half-way decent digital discounts all made console players make the digital migration in their droves. Oh, and Game Pass? That thing by itself is almost a good enough deal to sway even the most staunch defender of physical media.

My advice for game case manufacturers? Diversify: demand is only going down from here on out.

So, should we be strutting out of this generation with our heads held high, proud of our industry’s myriad accomplishments? Or, should we be limping away from it like some injured survivor of a desert island plane crash? If you ask me, it’s mostly the former with a sprinkling of the latter. Gaming is becoming more connected, more accessible and more convenient; this console generation has proved that more than anything. Nevertheless, it’s also brought questions of ownership to light. With an all-digital library, do you own any games at all? And with a live service game, what happens when content gets phased out? (Just like we experienced with the recent launch of Destiny 2: Beyond Light.) These are genuine concerns, for sure, but they seem faint right now. Coming out of this generation, I feel a sense of unity; I’m hopeful for the future.